The weather is scheduled to produce rain and wind shortly so I thought I had better get a ride in today.  It started foggy so I had to wait until that cleared and all was sunny and still at 9.30am when we rolled out.

My plan was to stitch two loops out of Bishopsbourne together and see how far it took me.  Looks like around the 45k mark.

With no wind the climb up Wilmore’s Lane’s hills of Rip, Rack, Roar and Rumble was easy and I was soon at the junction with Bishopsbourne Road.  The only issue was a truck plus trailer of the gravel carrying type had shot passed – I hoped it’s destination was close by so the rest of the ride was safe from the monster.  Too big for the backroad and travelling way too fast.

At the corner I received a phone call advising that the new wheel for the Bike E is ready for collection.  That’s good and a job for tomorrow.  With no wind still, the ride to the start of Armstrong’s Land was enjoyable as was the ride along the lane.  No traffic to worry about – the gravel truck must have business elsewhere – worth a cheer!!  Up the lane two vehicles were parked partially blocking the road.  I wondered if they were running cattle across the road as that happens in these parts when the farm comprises paddocks on both sides.  No – it was just two guys having a chat and I passed with a shared wave and smile. That’s OK – the road surface can be a bit mucky after a cattle crossing!

At the join with Green Rises Road I stopped for a sip or two of water.  What a surprise – the wind had suddenly sprung up and was getting quite strong.  It was a headwind into Bracknell from there.  The sign says this is a Neighbourhood Watch area – a bit out in the wilds and there are no houses to be seen for neighbours to watch!

At Bracknell I rode into the riverside reserve to see if any touring cyclists were staying there.  BUT there is a notice advising that, as from March 2018, overnight stays are no longer allowed.  Regulations and competition are given as the reasons – but there is no caravan park near here!  I suspect the Bracknell Pub might lose a bit of business now.

The back streets of Bracknell are somewhere not explored by me so I rode around some and found this house.  Looks like it was once a church and is what one could call, unusual.  The tower and the roof are clad in fish scale slate.  That looks expensive to repair!! 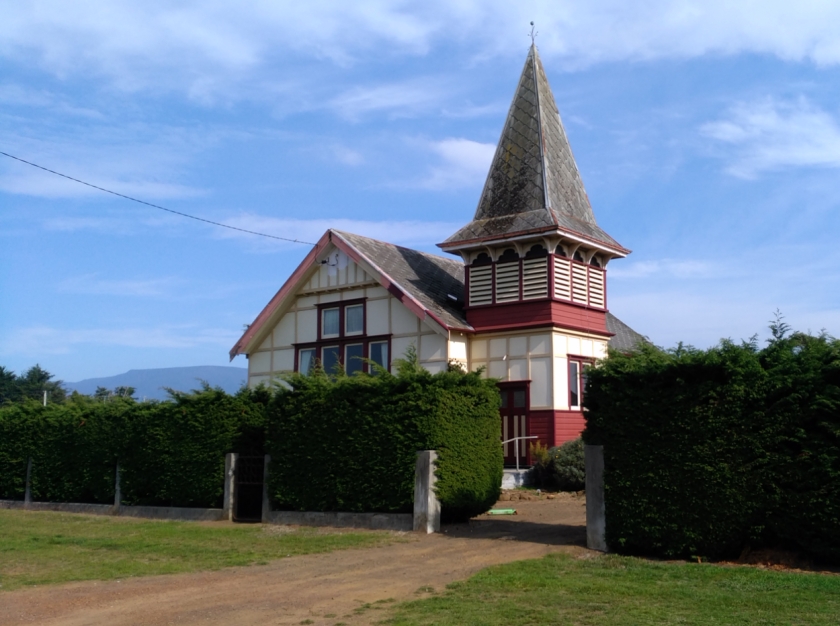 Out of the back streets and up to the Bracknell Roadhouse.  A grand name for 2 bowsers (1 petrol and 1 diesel) and a small general shop.  Searching through my bike bag and then my pockets I scraped together $3.20 – which was the exact price of the Oatmeal bar I fancied.  Now I had no cash or plastic with me at all.

Up to Pitt’s Lane and along to the river bridge and a stop to eat the bar.  The bridge was rebuilt last year and it was interesting to find two small holes in the deck through which the river can be observed.

The wind was now a rather nice, healthy tailwind and it blew me up Pitt’s quite fast.  As we progressed I noticed that my left foot was tightening up.  Odd.  I could not actually pedal as something was stopping movement!  Initially it seemed all was in order but then I spotted my shoelace had come undone and wrapped around the pedal/crank join.  It would not come loose.  I managed to unclip the shoe but could not find a way to unwrap the lace and bike speed was dropping.  Taking my right foot out of the cleat I realised I never stopped putting my right foot down – so the whole operation felt wrong.  When cycling and motorcycling is was always left leg down and then take any other action required.  In the end it worked OK – not a very cool looking stop but we did get to a halt without tipping over and nobody saw.  I re-tied the lace, tucked it in the velcro strap that stops it getting loose (?) and set off again.  Funny that, I have used this bike, shoe and pedal combination for over 10,000 kilometers in the past 4 years and never had trouble like that.

The wind blew us nicely back to Bishopsbourne and I estimate it’s strength was around the 25kph mark.  I stopped at Bishopsbourne to check the shoe / lace combo and all looked OK.  I also did practice stop using the right leg!

Autumn.  The poplars are almost bare ready for winter

From here on it was well cycled territory and I drifted off into thought land as one does.  I got to thinking about the Penguin – Turner’s Beach ride and the railway it parallels.  The rail is used by approx 4 trains a day from Devonport to Burnie (i.e. through Penguin) but once past Penguin it is no longer used.  There are talks happening about turning the track past Burnie into a Rail Trail but a strong lobby group is pushing to keep the rail arguing it could be used for a light railway.  This is the same argument that is holding up further work on the Scottsdale to Launceston disused railway Rail Trail.  I think the question is now stuck in a Parliamentary Committee so nothing much will happen either way for a while.

While I was ruminating, the storm clouds had been gathering but the rain held off until later in the day so my ride finished dry.

Tomorrow I may have a Ride #8 to pick up the Bike E wheel – if it isn’t raining.