I set up a new WiFi T100 on the Brompton yesterday and a quick check showed speed readings although it seemed to be speed reading a bit high.  However,  today the T100 did not work.  The screen lit up but nothing that should come from the sensor registered.  Checked the sensor distance to magnet on the spoke and it was OK.  Checked the T100 “manual” which is a sheet of paper with simple pictures – distances within spec.  Also checked the internet and found on a general cycle web site that the distance, magnet to sensor, should be within 3-5mm – and it is.  Checked the magnet lines up with the white line on the sensor – it does.  Opened up the sensor and found a small battery and pulled it out.  OK, which way does it go back in?  Can’t remember!  Where is the plus or minus sign on the fittings to tell me?  There isn’t one.

There was a bit of a halt here while I checked over what I had done and then went back to the internet.  There I found a link to a PDF copy of the T100 manual – so I downloaded it only to be disappointed when it was simply a copy of the paper I already had.  Neither “manual” even mentioned a battery in the sensor let alone gave an indication of which way round to fit it.  BUT on that web site I did find out that the WiFi range between sensor and display is 70cm max.  Guess what the distance is on the Brompton – yep – 70cm give or take!  The guy in the shop told me the range is “about a meter” when I asked and the information on the box didn’t cover this key fact – just said it was wireless.

Getting a bit pissed off now!! 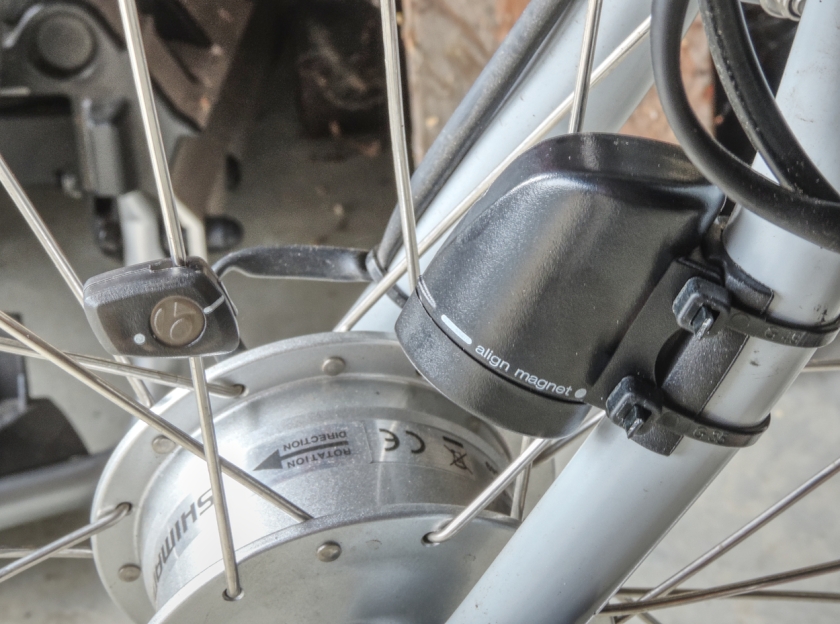 I examined the sensor battery compartment and worked out the battery orientation – providing the fitting worked like other battery holders.  The battery went back in and I dismounted the screen held it close to the sensor and spun the wheel.  Aha – speed indication at last.  Put the screen back in the holder 70cm away and this time it worked.

Next I took the bike for a run and found I was travelling at a surprising 48kph in 3rd gear after half a block !  The fun began to set the wheel size.  There was no menu option for a 16″ wheel and yesterday I had used the manual setting to get a figure in.  What was unknown and unexplained in the “manual” is how to actually enter digits and that the display _ _ _ _ requires 4 digits (being the roll-out distance in millimetres) to be inserted.  By pushing all the buttons in turn I worked out how to enter a figure into each _ but initially I didn’t know what the _ _ _ _ was expecting.  So on my first several tries I varied in speed from 80kph to 1.5 kph all in third gear moving slowly along the street.  Obviously I hadn’t got this right yet so, back to the internet.  On a Facebook page relating to TREK, I found someone had produced a chart showing general 16″ wheel sizes and the figures to be entered and this figure was the “roll out” in centimetres.  Now I knew what was required I did a roll-out and found my wheel travels 1320cm per revolution.  This figure was entered and a test proved the displayed speed looked right.

Now, will the T100 work tomorrow?  It will be interesting to find out.

So, why Alzheimer’s fix ?  Well, it is said we should use our brain to keep it active and possibly stave off the big A.  I consider making a T100 work to be akin to solving a cryptic crossword puzzle.  An interesting exercise but unnecessarily annoying as all the extra info should be in the “manual” !!