The Vivente and I rode the Armstrong Lane country 40k loop twice this week. 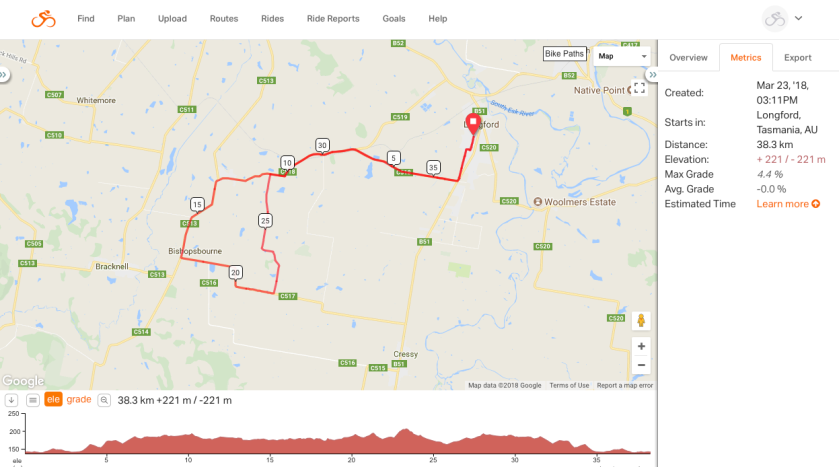 The wind at the beginning of the week seems to have blown away our warm weather.  Both days of the loop it was a cool start at 10°C.  I am now wearing the “Frosty Boy” top and new merino/lycra mix leggings.  These are the first bit of anything with lycra in it for me.  Nice and warm and comfortable to ride in.  They should be good for the Victorian riding I will be doing in a wintery July.  Currently there are heaps of grasshoppers on road – some small and brown and some bigger with yellow bodies.  I wondered if we have Locusts in Tassie so I checked Wikipedia – it is possible they are locusts.  I had better catch one to check it out.

It is also the start of “Ballooning Spider” season.  A couple of years ago these spiders were thick in the air between Westbury and Longford and the event even made it into the National Geographic magazine.  The article available HERE is focussed on Launceston but the real centre was Westbury.  This week a few flying webs attached themselves to us as we rode along and a couple of thick jumbles of threads were spotted sailing in the wind.  As there has been no major flooding I am expecting the numbers to remain on the small side.

Friday was the Deloraine loop and the temperature when leaving home was 4°C.  It was 7°C when starting the ride and 10°C on our return to the Empire coffee stop.  With the cool air and yellowing Poplar trees – yes – we are really into Autumn.

This ride is along the north-west coast and generally follows the sea – which here is Bass Strait.

It was a good cycling day as we left home and it remained the same as we arrived at Penguin.  This is not always the case as the proximity of Bass Strait often means wind and/or cooler temps.  We grabbed a park under a tree and took Oscar for a walk along the front while looking for a Cafe for coffee.  There was nothing suitable and so I readied the Brompton, hopped on and took off while Mrs C set off to visit Penguin Markets.  Oscar reclined in the back of the car in the shade and had a sleep after his busy morning.

Penguin was getting a bit tatty and so it has been given a new set of clothes.  The real penguins in the area are likely to be Fairy Penguins – the world’s smallest penguin.  They are smaller than the one next to B.

I was serenaded out of Penguin by the ice cream van.  This van had a considerable collection of music box tunes broadcast through a fair sized speaker on its roof.  I cycled out to the tune of “Mexican Pete the Bad Bandit” and “PopEye the Sailor Man”.  I did not hear it play the perennial “Greensleeves”!

Exit Penguin.  The residents garden the roadside verges and they are spectacular in Spring.

The road runs alongside the rail and the coast.  It is pretty spectacular.

The road is narrow and windy and the traffic today was helpful to cyclists.  Thanks to all.

Interesting.  How to stage such a play?  Could be worth attending to see how it is done.

We used to belong to Huon Valley Theatre and I just can’t imagine how this will be tackled.  But then we did “Little Shop of Horrors” with an ever growing plant (as it ate cast members!).  Still, this seems ambitious.

The views are outstanding and the day perfect.  How lucky am I to be cycling this route today?

The only climb on today’s ride

Up the hill and then it was a downhill cruise to Ulverstone.

Riding the cycle path into Ulverstone along the Leven River

As you can see, the local council just loves white concrete.  All shared paths are white as is the entire area around the Leven River Wharf area, visible on the far side of the river in the above picture.  I got a coffee there but could not find a seat in the shade.  All seats were in the middle of blindingly white concrete!  I walked on, pushing bike and holding coffee until reaching an older developed area which had a more comfortable and shady setting!  The temp had risen to 20°C and it was a bit hot in the sun after the ride so far.

The route from Ulverstone to Turner’s Beach is via a series of shared trails and then the Esplanade into T Beach.  As I left Ulverstone I was unsure as to the exact way but a cycling couple overtook me.  I asked if this was the right way and they told me it was.  So I followed them as they were going the same way.  It was interesting.  I tagged along about 3 bikes lengths back on my 16″ wheel bike and wearing normal clothing and the bloke (in lycra on a lightweight bike) seemed to get a bit annoyed ‘cos I kept up with them.  So I did all the way to T Beach!  It made me feel good !!!

The Cafe at which Mrs C and I had lunch

But .. once again I forgot to take a picture of the contribution to the local community.  The gummy shark plus chips was so good we were sidetracked by the eating.

I will have to do another trip – luckily there is a week to go for the Challenge!

Weekly total – it’s been a good week this week but I am unlikely to get to 2,000k for the year by end April (a secret goal).