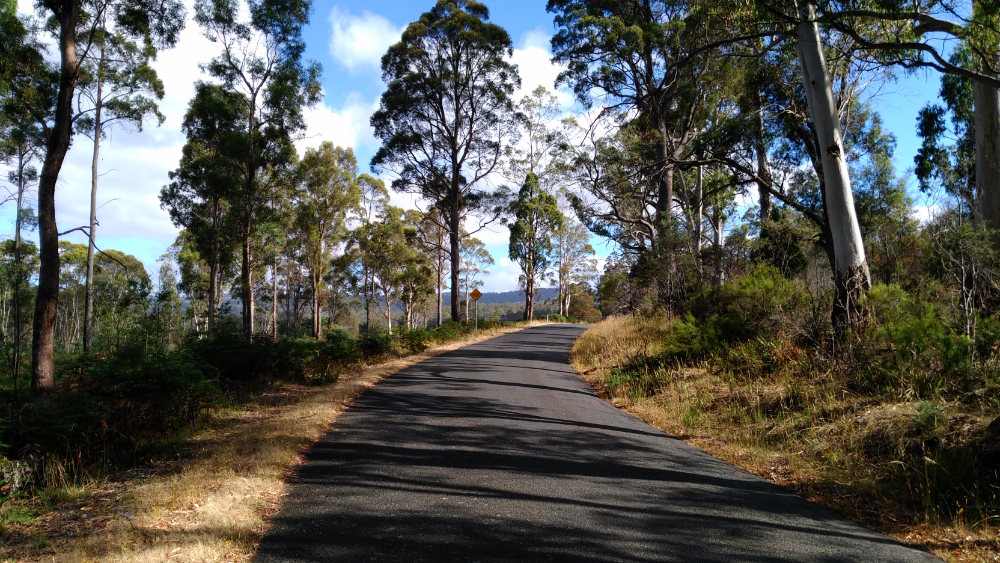 Another mixed bag of local circuits to get up to 100 kilometers in the week including an interesting ride away from home.

Monday began the week with a 20k to Bishopsbourne.  On the way I met L (best Barista in the area) walking her dogs by the roadside and got all the gossip about the Rustic Bakery at Cressy – which has been featured in my Coffeeneuring and other adventures.  Although the products were good, apparently they are in financial difficulties and are cutting back on quality (including L) – that explains things.  Still, it was good while it lasted.

Tuesday was a blowy easterly day and I had a think about an “out and back” ride with the “out” being into the wind and the “back” leg sailing back to base on the wind.  Evandale to Nile fitted the bill so I put the Brompton in the car and headed to Evandale. 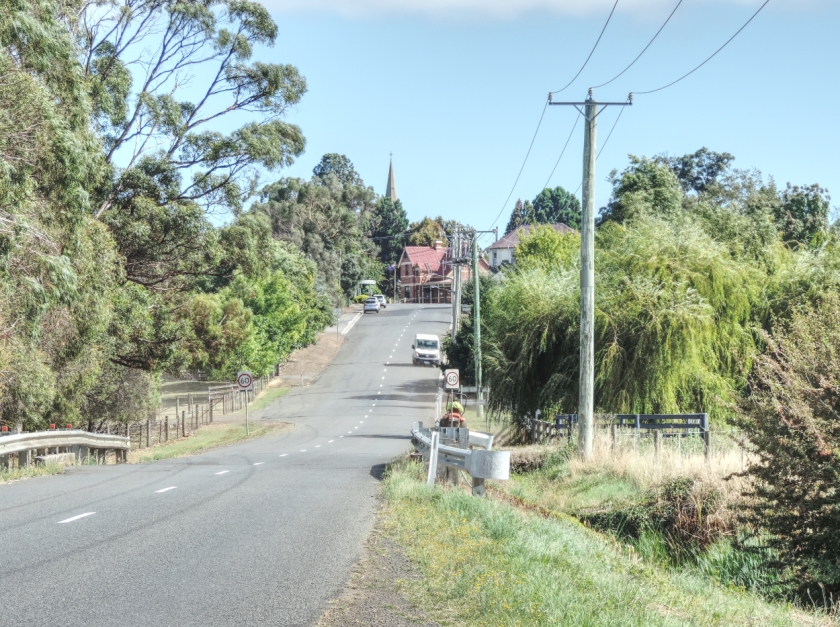 Looking up to Evandale – if it wasn’t for the gum trees on the left it could be a UK village .. maybe.

The ride is about 12 ks out and 12 back with 10 of those ks being along a dead straight road.  This isn’t as bad as it sounds because the road is undulating and it is not possible to see the end over the lumps and bumps in the road.  It was, as I expected, a ride into a headwind.  Second gear at 10kph most of the way. 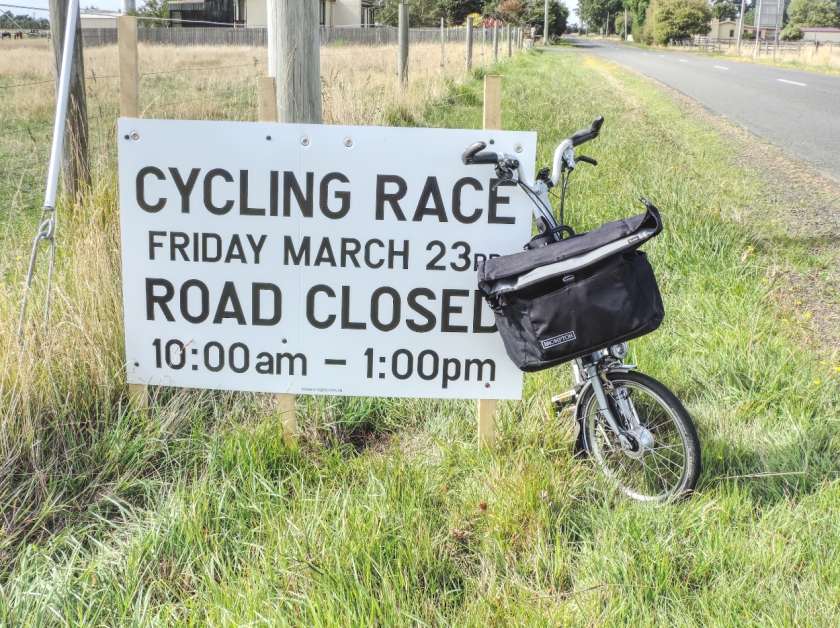 So I looked for things of interest to take the mind off the slog. B is obviously cosying up to the sign asking if we can go in the race.  Well…..no.

The ride started off with a cool breeze but as the morning wore on it warmed up.  I had tugged on the Frosty Boy winter top responding to the cool temp.  I was now getting a bit hot! 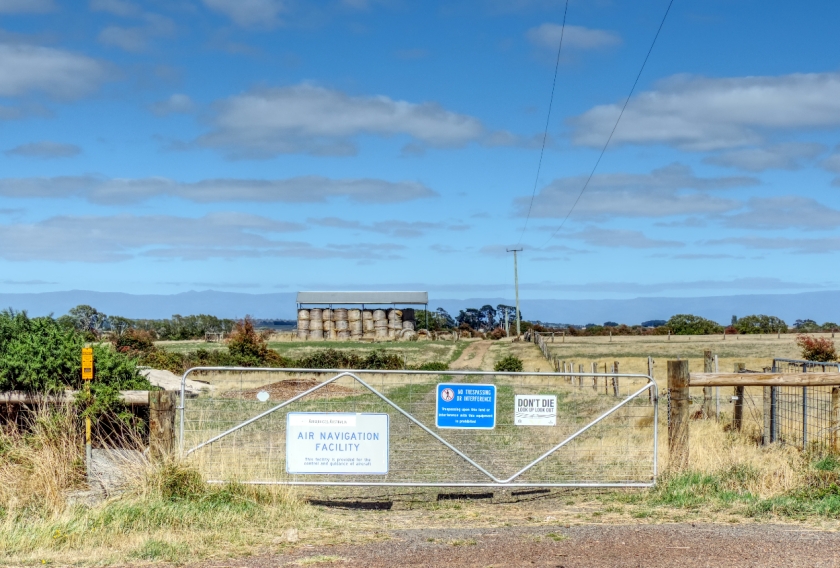 An Air Navigation Facility disguised as a Hay Barn?  That will fool them.

As you can see, it was a visually splendid day.  When riding a “down-dulation”, third gear could be selected and speed increased to 12 kph!  There were lots of slower “up-dulations” though. 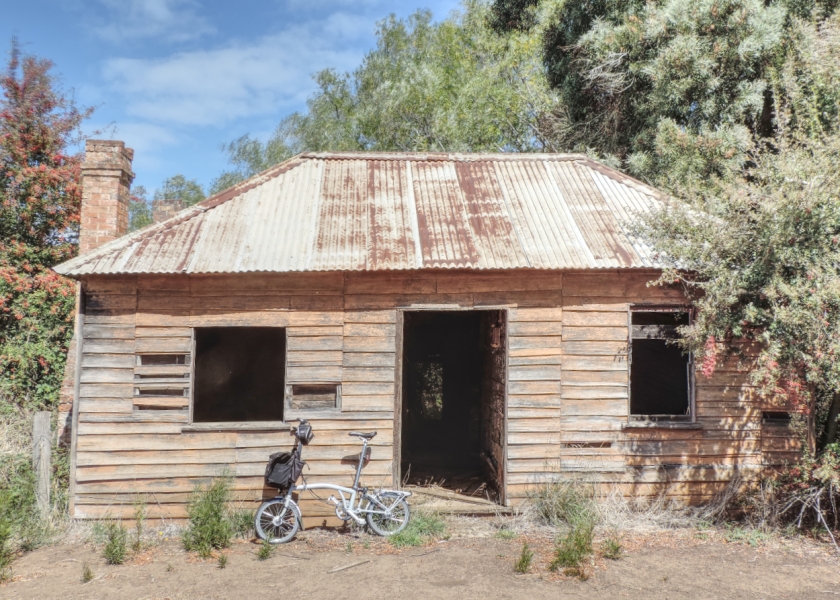 Nile was reached and I rode through the little settlement  which was once a busy place with farm workers, blacksmiths etc providing the person-power to work the farms of Clarendon and another nearby large farm.  Brompton just had to pose by this workers cottage which has seen better days.  When the small wooden house was built it would not have expected to see such a machine.  You can see through the house – a “shot-gun” hallway design as you could fire one though the house and not hit anything.  Well, depending on how your shot pattern scattered.

The village is believed to have been originally named Lymington by James Cox (Clarendon), after the seaport town in Hampshire, UK. It was renamed “Lymington North” to avoid confusion with “Lymington” near Port Cygnet, Tasmania and in 1910 was renamed again, this time becoming “The Nile”, no doubt because of the continued confusion.

I carried on past the village to cross the Nile River, which is something you don’t expect to do in Tasmania.  No remnants of Cleopatra or even a pyramid to be seen. 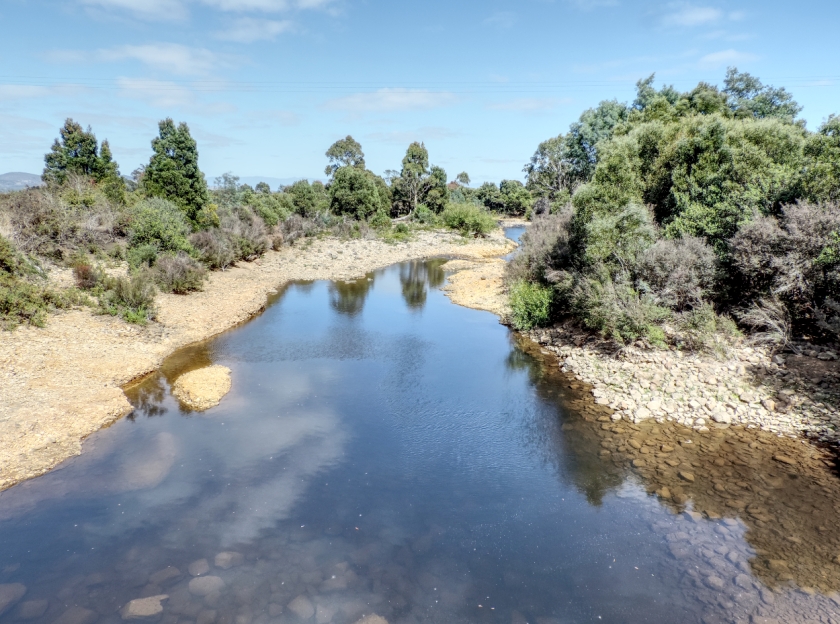 The view to the other side of the bridge was being photographed by a couple of ladies looking professional using cameras with very large lens.  As I took the above shot I heard a splash and scream.  Turning I found all was OK, one lady had decided to pop in for a swim and found the water bloody cold.

Turning around, the joyful part of the ride began.  Once out of Nile the hedges etc disappeared and the wind came on full blast.  Soon we were shooting along in 6th gear (top) and well into the 30kphs.  So much nicer than going the other way.  As always though something cropped up.  Because I was now riding at the speed of the wind, the flies could land on the face and suck moisture from anywhere not covered.  It was surprising how many there were as the wind on the way up and at the bridge stop had deterred them. 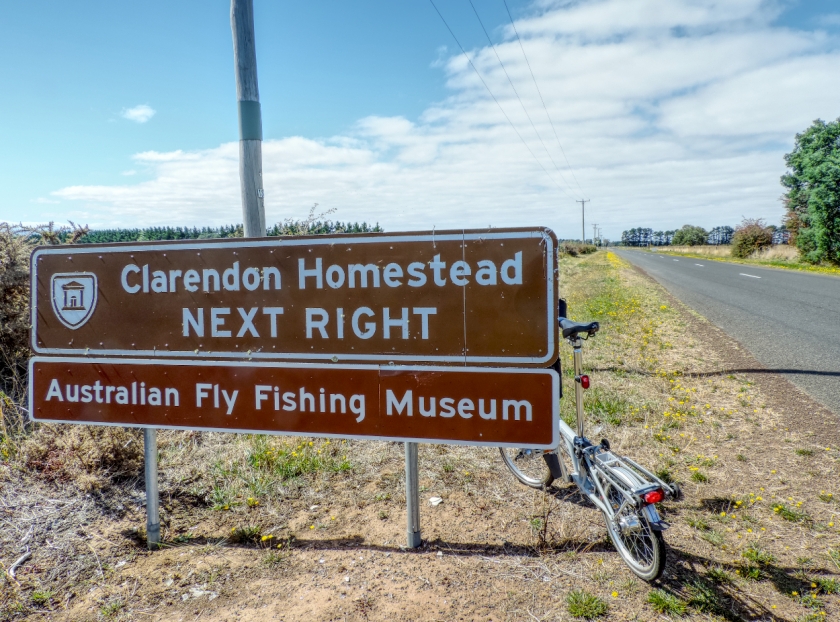 Clarendon looks like it was built for “Gone with the Wind” so I thought I would cycle up there and get a picture.  The ride in featured a cross wind but the hawthorn hedges along the roadside gave good protection.  At the car park there was only one car to be seen, complete with a grumpy looking bloke just getting into it.  Why?  Well, because the house and gardens are shut Monday and Tuesdays and we couldn’t see the house at all as the gates (closed) are well away from the house itself.   Perhaps there should be a sign on the road saying “Opening hours ……. “. 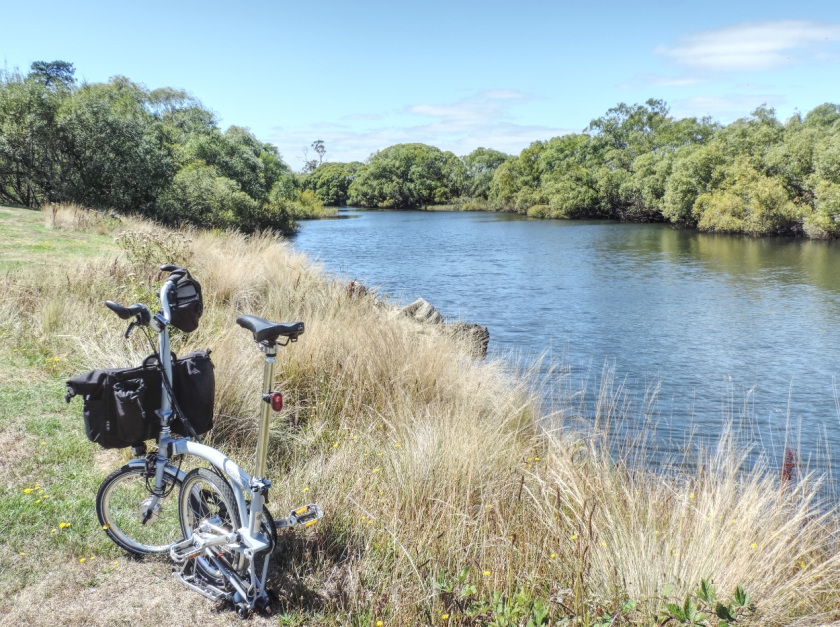 By the South Esk River at Clarendon

I found a small gate sort of hidden behind a tree that provides Anglers Access as negotiated between the National Trust and the Tasmanian Anglers Alliance.  Using this I wandered down to the river but still could not get into any place to take a picture of the house.  So I gave up and headed back to the road.

The wind stayed steady and I was able to cruise along in the 30s up and down the lumps and bumps and to the foot of the hill into Evandale.  Today a good ride providing everything I had hoped for – except Clarendon and Penny Farthings.

Penny Farthings?  Well on Saturday the National Penny Farthing Championships will be held at Evandale and I thought there might be one or more out checking out the lie of the land.  Not one to be seen.  we shall just have to come back on Saturday.

Wednesday.  Routine ride to Bishopsbourne.  Noteworthy for the lack of any sort of wind.  Unusual and very pleasant.

Thursday.  Nothing much – a ride to the shops and down to the South Esk to check it out.

Friday.  Deloraine to Porter’s Bridge Road mainly in the rain.  Today and tomorrow we cop the remains of a cyclone that dropped a heap of water across WA in the past week.  Broome had half its annual rainfall in a day!

SitRep.  If the rain holds off and if the Penny Farthing races are on, I will write that up as a separate entry ‘cos there will be a few pictures to be included.  So far for the week I have 48 kilometers showing on the odometers of both the V and the B – so 4 more and I will have completed the 100k for this week.  More after tomorrow.