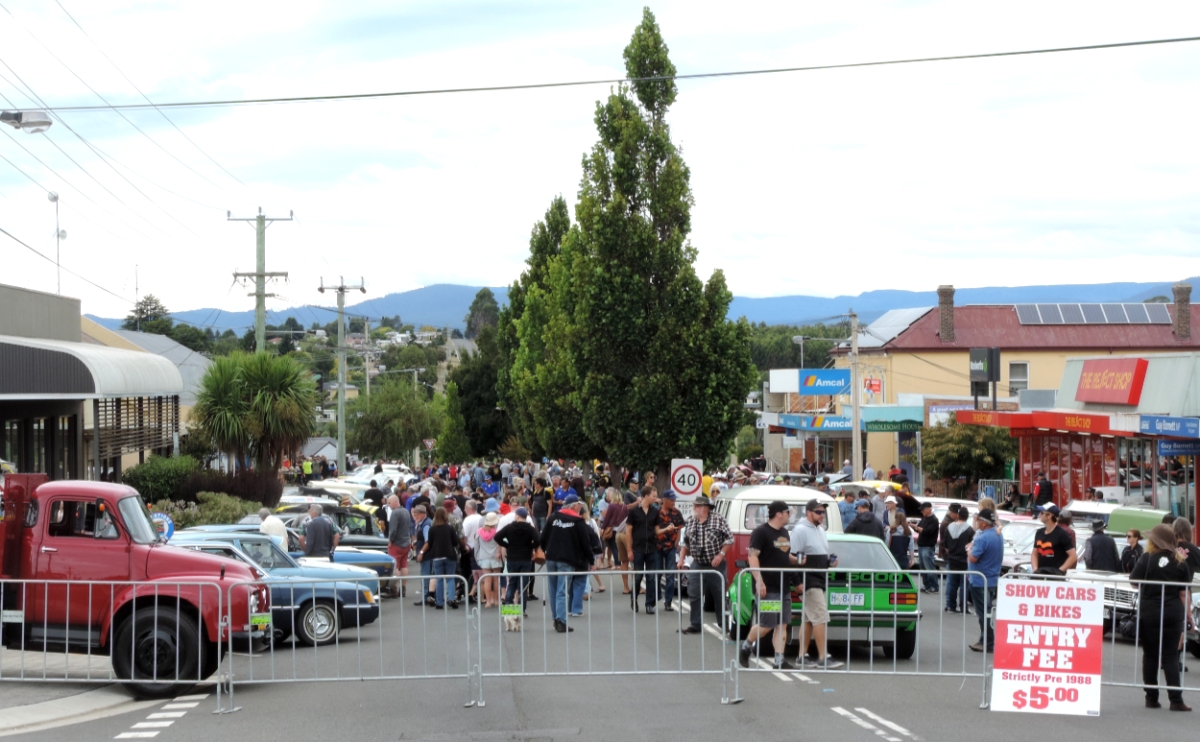 A different start to the week.

In January 2017 Robert Marchand set a new cycling record for his age group.  In fact, a new category had to be created for him.  At 105 years old he had cycled a verified 22.547 kilometers in one hour around the French national velodrome in Saint-Quentin-en-Yvelines west of Paris to set his record.  Since reading that I have been wondering how many I can knock out at the Longford velodrome.  So on Monday I took the Brompton along and had a go. 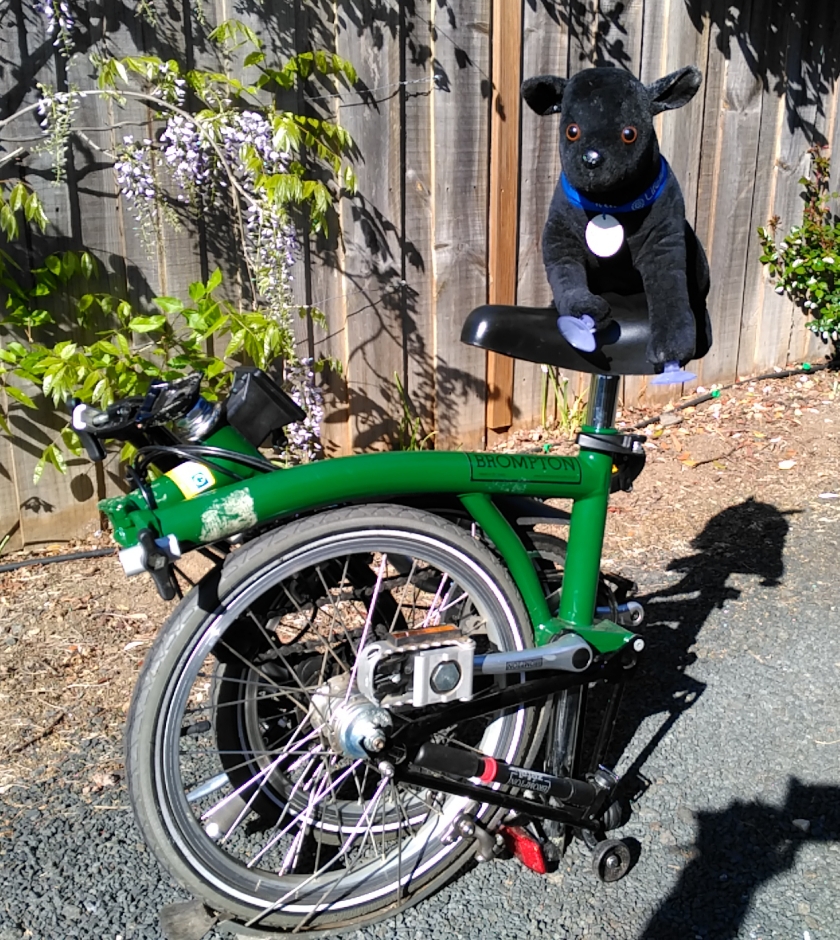 OK – Carole’s Brompton not mine.  Black Dog remained at home.

First things first – I took a video of the circuit.  One day I will master the tools and produce a better video and a better sound track.

The refurbished Longford Velodrome was officially opened in March 2015.  I searched for some track history but found nothing today.  I believe the velodrome was originally built using concrete back in the 1930’s.  It is built to the correct proportions for racing but only has limited banking and so speeds attainable on the steeply banked indoor tracks are not to be found here.  A local track cycling club uses it for training some weeknights but most action can be found at the skate park in the middle of the track. 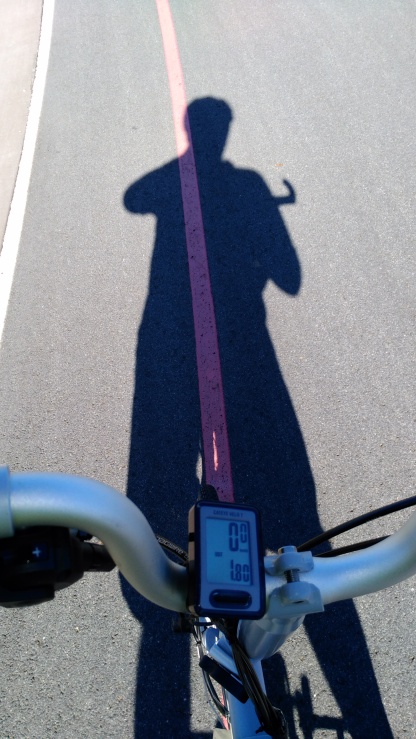 My attempt.  Starting with 1.80 ks on the clock, I managed to get up to 22.53 before the timer rang on the phone to tell me 60 mins were up.  The Galahs were probably glad when I finished.  They were eating something in the grass on the inside of the track and everytime I went passed several flew off then turned and came back.  Must have been a tasty something.

An unverifiable total of 20.73 ks – oh dear.   There were a few differences between the Frenchman and me which could account of my poor showing.   Robert has another 33 years of cycling built into his legs (!); a single speed track bike v 16″ wheel 6 gear commuter;  track tyres v touring Marathons; enclosed velodrome v open-air ‘drome c/w healthy north-west breeze BUT, more importantly, I suspect a fit 105 year old will shine anytime.  For “fun” (?) I will try again later in the week with the 700c tourer.

Something a little different.  A local farm has created a maze for the past 5 years.  This year’s maze design references Richie Porte (a Tasmanian cyclist considered a serious contender in the 2018 Tour De France).  See the Maze here.

The Rest of My Week.

Well, the weather turned to custard this week and I didn’t get back to the velodrome.  Tuesday and Wednesday were windy, thundery and not nice at all.  King Island, a little north of us in Bass Strait, experienced gales with wind speeds reaching 143 kph.  Launceston, closer to home, got up to 104kph and Longford had winds strong enough to really annoy by blowing down my climbing bean tripods.

I spent the windy time cleaning coffee equipment and preparing for the next series of coffee bean roasts. 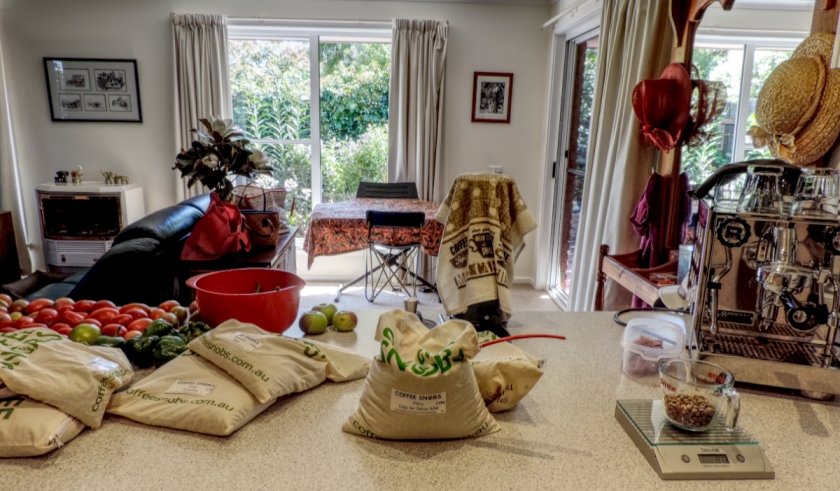 A few short out and back rides were fitted in and then, on Friday, the Deloraine morning ride took place.  Rider K is interested in buying a Vivente (possibly the one with the Rohloff Hub if he can swing it) so I took my V along for him to test ride while I rode the Brompton.  The ride out to Porters Bridge Road was good – tailwind.  Guess what?  the ride back was not – the headwind formed from the remains of the stormy weather was gusting from the front and then the side and then the front again…….  The Brompton front bag did not help as it is an excellent wind catcher.  K was all smiles after riding the Vivente and all he has to do now is decide on which model to order.

Sunday saw Sue and I back in Deloraine for an event of a different type.  There was a link to cycling though. 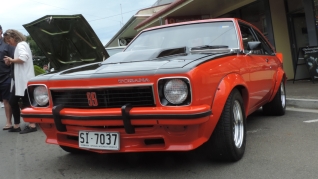 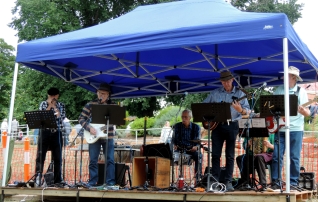 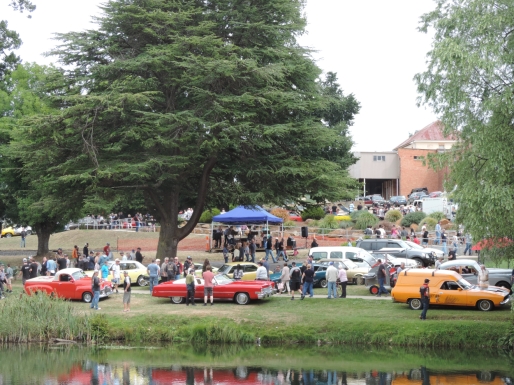 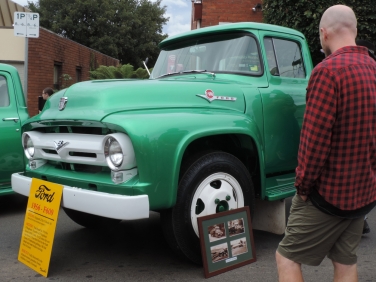 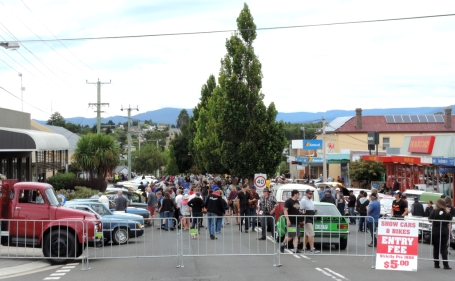 The event was the Deloraine car show for cars older than 1988.  The band playing vintage rock and roll had two cyclists in it.  The singer is K who rode my Vivente on Friday and P in the green shirt.  The bass is made from a tea chest just like the good old skiffle groups (anyone remember Lonnie Donigan?).  The green Ford F600 has been in the area since new in 1956.  It was used to tow a trailer carrying bee hives to various sites around the state.  The red Torana is a good example of a “Boy Racer” from the 70’s.  A 5 litre V8 squeezed into a small space and they go like a cut snake.  There were many other cars from the same era there – Ford Cobras, Valiant Chargers, Holden Monaros, Ford Falcon XY GT “Shaker”s – the list is large and goes on.  The size of the gathering was quite a surprise as who would have thought so many cars on S(pecial) I(nterest) registrations existed in Tasmania.  Eventually Sue and Oscar got bored and we went home.

Sunday afternoon it was drizzling and an idiot was out and about in Longford smoking tyres.  I had 9 kilometers to go to get to 100ks for the week.  So I saddled up the B and went out to finish off the 100k, take a library book back and see if I could get some video of the idiot to pass to the Cops.  Result : 100k travelled in the week and no idiot seen.