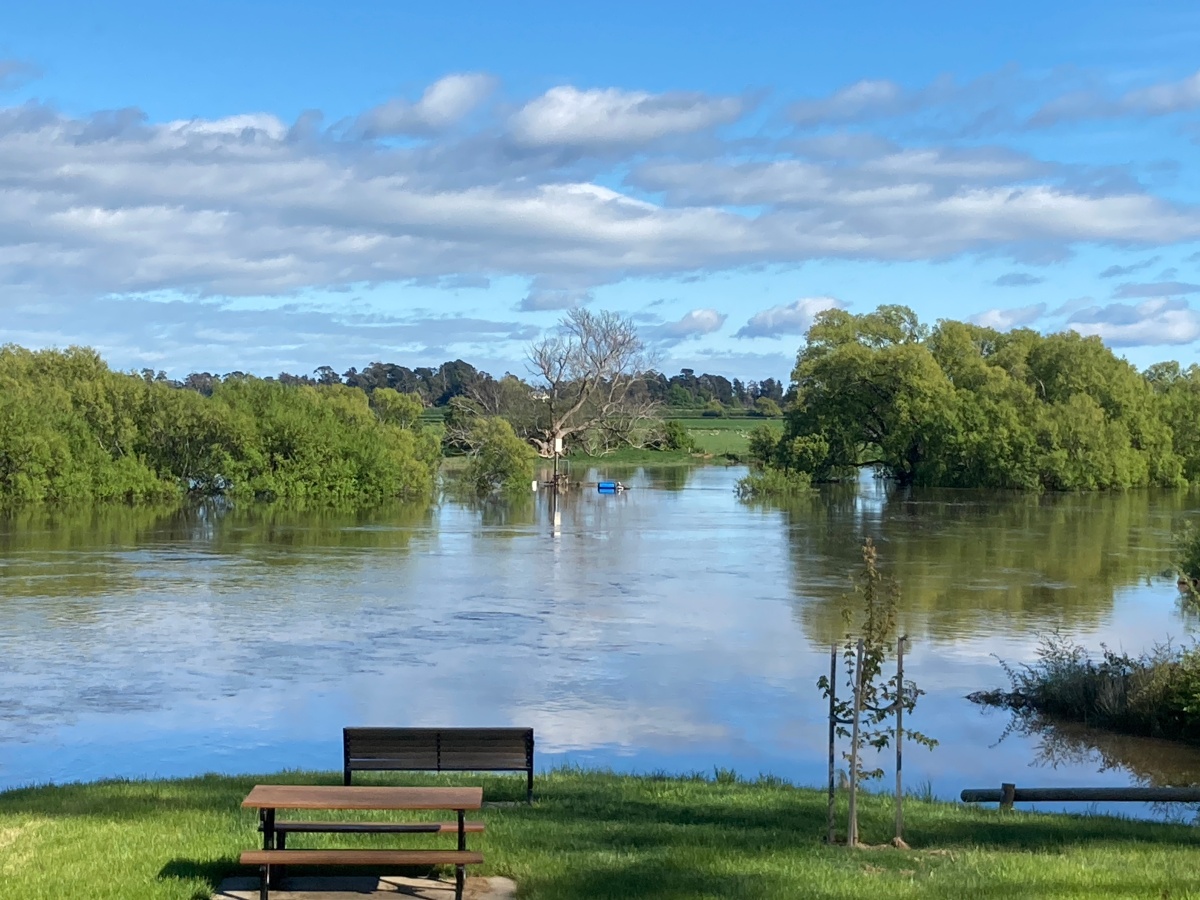 Three geriatrics hop onto their trikes and ride the waterlogged Norfolk Plains – waterlogged because it has seen plenty of rain in recent days.

But first let’s catch up on a few things.

I decided to purchase a new flag for the trike. I saw some good ones on Etsy and ordered. Imagine my surprise to find it came from the North Pole! From the North Pole to close to the South Pole it flew (well, the Australian Antarctic supply ship is based in Hobart). And here the flag is installed.

I think it makes a bit of an “I am here on-the-road” statement and the material looks like it will last.

In the past week I did a couple of rides Bishopsbourne way and each time, when traversing the rail lines, the chain fell off the large front ring landing on the smaller one or fell off completely. It’s the looseness in the chain that does it – even though the derailleur was left in place to help manage the slop. So I took the double ring off the front and re-installed my “Bling Ring” 46 toothed chainring. The chain is now immovable.

The big news is that Ken of Huonville has finally got his trike fixed. A series of mechanical issues prevented him riding for a few weeks but now, all is OK and he and Diane came up for a visit.

On Sunday we set off. Ken, Colin and I. Between us we have a combined age of 231. Hence the G3 – the three geriatrics. Note though, not a walking stick/pusher/walker/Zimmerframe in sight. Yet! (Of course Colin, the youngest, is probably well peeved at being included as a G.)

Ken and I met with Colin at the Brickworks and started off up Wilmore’s Lane. Ken was introduced to the 4 climbs – Rip, Rack, Roar and Rumble. After climbing those OK he began to have more confidence that his Greenspeed GTO was finally fixed and working well. Nothing to it…

All the farm dams we passed are full. In fact most are overflowing.

We cruised to Bishopsbourne along the road flanked by green hawthorn hedging not yet in bloom. That’s next week. We stopped to use the facilities at Bishopsbourne where we also watched the resident swallows cruising above the playing fields, catching their midday meal.

Point of note: during the trip the G3 members used every facility they cycled past! Gmen and their bladders!!

After that comfort stop we rolled on and along through more of the same countryside to Bracknell. There Ken was feeling a bit hungry so we went up to the shop come petrol bowser place and he managed to get a decent ham roll to fill the gap.

Then back to the picnic spot where we had a go at making coffee. Colin wasn’t into it today so used a tea bag instead. I used a Finn but ground the coffee too fine and little coffee got through to the cup while Ken left all his gear in the pannier and drank water. He hadn’t enough energy to try out the method he chose to bring – using a small moka pot.

Guess what? Some of us then used the facilities.

Back on the bikes and climbing up out of the Liffey Valley we noticed the wind had risen. Luckily it would be to the side or behind us for most of the way home.

I suspect Ken got a little fed up with both Colin and I asking him how he was going. For some of the time Colin rode close to Ken, in case Ken had issues. But no, he didn’t. For a person who has a bit of difficulty walking these days, it was great to see how well he is able to ride his electrified trike. With it all working OK, confidence was regained and the concerned look disappeared from his face.

The trip back was completed in good time, the traffic remained light, many drivers responded to our waves and the ride ended with a feeling of great satisfaction.

Finally. A little something found in the local shop: Bum Hummers?!

Here is a short vid of the ride :

2 thoughts on “The G3 Rides Again”