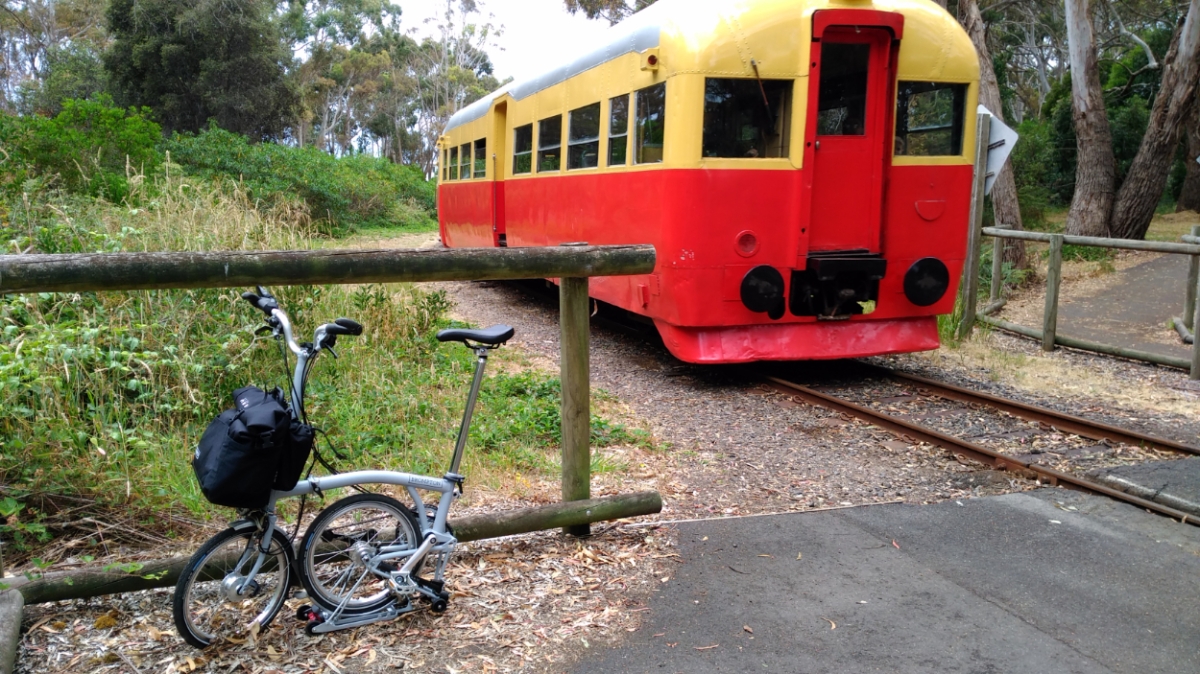 My Australian readers will recall the catchphrase from the Don Smallgoods advert which ran on TV. Maybe still does. DON® is one of Australia’s largest small goods manufacturer based in Castlemaine, Victoria.

In this case “Don” refers to a small town just outside Devonport.

Why there? The NW Bicycle Network group planned a ride, so I went along.

It was billed as a social ride of some 40 kilometres travelling between Don, Devonport and Latrobe – with an extension at Latrobe should you be able to resist the lure of Latrobe coffee. The added bit was to ride out to the mountain bike park that has been developed along the banks of the Mersey river. All up I cycled 46k for the day.

Now, I’m sorry but this blog isn’t well documented with current photographs. My old phone died last week after heating up while in my pocket! It became worryingly warm so I turned it off and headed to the phone shop for a replacement. The new phone is taking me on an interesting journey. Especially with the camera. It keeps taking something called “loops” (short repeating movies) for some reason. I think it’s taking a still image but I get a nice little loop instead. Great to look at but impossible to blog unless I upgrade to WordPress Premium. I do have some images but getting them onto the computer and into the blog is another thing. Supposedly iCloud is the vehicle for this but does it work? NO! Or rather – NOT YET, because I will beat it into submission! Oh, hang about! :

Anyway, we are in business.

Back to the ride. I gave myself 1.5 hours to get to Don, unload trike and be ready for the 11am start. The journey was good, light traffic mostly barrelling along at the speed limit. Only a few tailgaters but, as usual, a lot of cars without working indicators ( or with lazy drivers). Recent rains have left a fair amount of snow on the Tiers. The snow capped peaks and sunny blue skies added a zing to the day after all the grey this week.

I parked close to the Don community railroad station and was then asked to remove myself to a car park away from the road. The railway people like to have the park clear for their customers. A reasonable request, so I complied.

The seat has been reluctant to come out of and go into the trike of late. There was the usual battle to get it in. By the time I had the trike ready to go, most people were gathering around the ride leader. It being a social ride and a top day there were 28 starters. A large number but we would soon be spread out along the shared paths. With little road riding involved, this turned out to be not an issue.

I fired up Ride with GPS on the new phone. Almost immediately the front screen showed me I was in Don and it was all ready to go. That looked promising. The old overheated phone had trouble finding enough satellites to start and then lost track of them during rides.

We set off – me at the back to avoid tangling with the 2-wheelers. Also because I was facing the wrong way and didn’t see them sneaking off over the grass to get to the pathway.

The first few hundred meters were extremely bumpy. The tarmac surface has been undermined by tree roots so it was good to get over that bumpy bit. We then rode through a paperbark “forest” tracking the section of rail line the community group is allowed to run their trains on.

There used to be two crossings of the line which gave good opportunities for photographs. They’re are now being bypassed by a new section still under construction. The traverse of track works was pretty bumpy. (Remember the bumps – I am mentioning them for a reason unrelated to comfort).

The trail led down to Bass Strait where we turned right and headed towards the shared paths that run into Devonport alongside the Mersey River. It being Sunday and good weather we met a fair few walkers, dogs and people pushing others in wheelchairs. There were also family groups with small children on small bikes. It all needed a bit of care and a smile/wave/greeting every few metres!

Passing the town and the Spirit of Tasmania II moored at the dock, I recalled riding this section last year with Ken of Huonville. Good times. Good rides.

Today’s group met up just before the crossing of the Mersey. The shared paths run either side of the highway and we needed everyone to end up on the same side! This we did and a few in the group peeled off for an extended ride going up the coast then across to meet us in Latrobe. I thought about going but was unsure of the extra distance and the battery was already showing signs of charge depletion due to the higher than normal power level I was using to keep up. The group tends to pedal along in the low 20kphs which, for the trike and I, is a little quick. We run comfortably between 16-18kph but, with an extra push, can extend ourselves into the 20s. So I turned toward Latrobe with the main group.

An issue with the trike has been raising it’s head. It decides when to drop the chain from the big ring to the small one. There is no derailleur so it gets fed up with big ring running and swaps – smoothly and quietly so I don’t realise it has happened. Until I notice I am pedalling hard and going slow because the fast cadence has cut out the motor and I am riding a small chainring !

As we passed through Ambleside on a cycle lane, I had stopped to remount the chain on the big ring once again, then, just as I restarted, I heard a clanging noise coming from the back of the trike. I stopped again 3 times before identifying the source. The rear mudguard fitting had come loose – no doubt due to the earlier bumps. I was pleased that was the answer as I worried that the new battery shelf was working loose. It wasn’t. Each time I stopped another group of our riders rode past all asking if there was trouble and could they help. As I said before – a nice group and they were all way ahead once the issue was diagnosed.

A bit further on and we were able to cross over to the shared path under construction. The first part was useable and, once it is complete, the ride Ambleside to Latrobe will be a pleasure. I took a picture of the pathway but it turned out to be one of those “loops” and non-uploadable to the blog.

On and on and just before Latrobe I finally caught up with some of the slower members. Just goes to show – a couple of stops and you are history!

We rode through the bottom of the Latrobe main street and then turned right to go out to visit the new mountain bike tracks being developed on the banks of the Mersey. The parking area was just about full when we got there – trucks, utes, cars all sporting bike racks of various types and bikes everywhere. We cycled the gravel transit track out to the end. There, since I was here last, a bridge across the Mersey has popped up, taking riders to a series of new tracks on the other side. Mountain biking has really taken off in Tassie and, even without interstate visitors (borders still closed), the tracks are buzzing.

It was about this time I realised the clanging had stopped. A look confirmed the bolt/bracket holding mudguard to frame had disappeared down the gravel track. Good. Problem solved for the short term. Might use a cable tie instead.

A ride back to Latrobe and we were ready for coffee. The 28 riders dispersed into various coffee shops and we agreed to travel back to Don at our leisure.

This I did after a pleasant chat with several of the group. That’s when I found out what happened to the platypus pools that used to be accessible alongside the Mersey, close to where the mountain bike park now starts. There were some bad floods in the Latrobe area a few years back (2016?) and Mother Nature filled the ponds in with pebbles and other river debris. The ponds and platypus are now gone. That was the same rains and flood that washed the platypus out of the Gunn’s Plains Caves mentioned in a blog a week or two ago. Who would be a platypus?

I rode back at my own pace and ended up being the last bike back to the Don Sports Ground. A few people had waited with the Leader hoping the mechanicals on my trike had held together. To commemorate, I was handed a pair of Bicycle Network Tasmania socks!

(Video uploaded to YouTUbe was pixelly/blocky. Thought I had fixed that! Let’s try Vimeo)