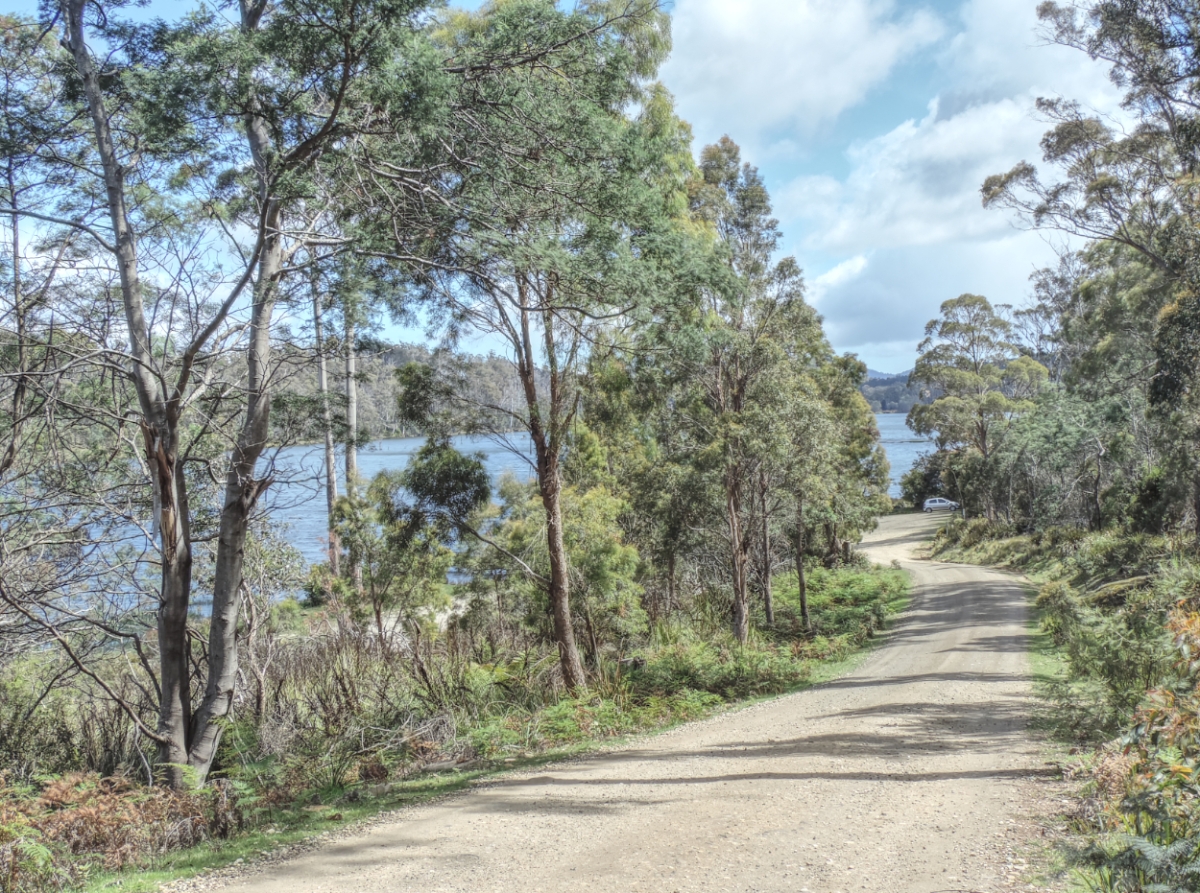 I decided a trip to Four Springs Lake was needed and, if I linked that with a visit to a new Cafe in Westbury, the trip would cover the weekly Coffeeneuring requirements too.

We are still juggling riding times and the weather.  On Wednesday the bad weather was scheduled for the afternoon so I set off at 8.30am on the drive to Westbury. 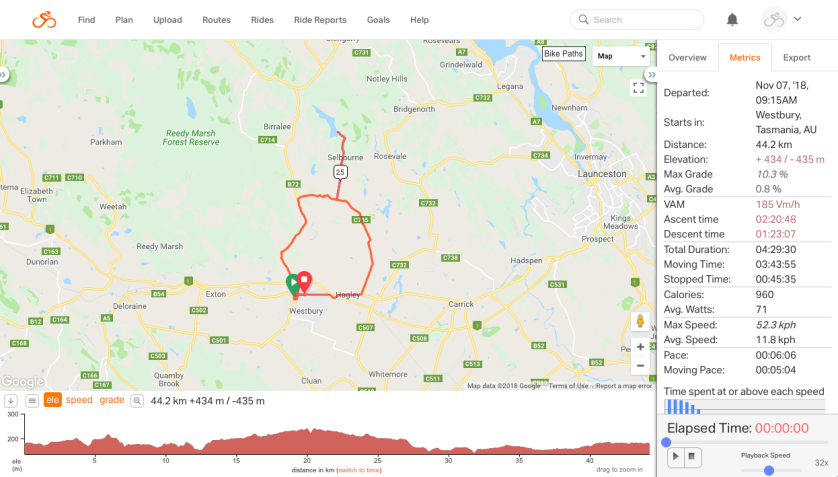 From there the plan was to cycle along Birralee Road, take the Melbourne turn and the lane to Four Springs from there.  Return was down to Hagley and then back to Westbury along the Meander Valley Highway.  On driving through Westbury to park by the green I noticed the Green Door Cafe was closed.  So it will have to be the Heighway Cafe instead for Coffeeneuring.

As I unloaded the trike from the car and readied it and myself for the ride, a group of Westbury cyclists formed up nearby.  They told me they ride each Wednesday and we had a short chat before they got into organisational mode.  Focusing on the Magnum, I took care to tighten the bolts associated with the folding rear end and the seat before setting the rest up.  I was eventually ready.  Grey clouds were around but so was some blue sky.  The wind was ever present.

Birralee Road proved hilly.  I had not expected that even though I have ridden it a few times over the years.  The wind was head on and the hills interesting on the trike.  I was down in bottom gear a couple of times in order to spin up and preserve the knees for later.  Initially the road passes though a light industrial area and I was passed by a number of trucks of the not-so-light variety.  After the end of Industry as Westbury knows it, the number of trucks on the road went down but I was soon reminded this stretch of road is the haunt of double trailer log trucks.  Luckily, whenever a truck approached from behind I was able to head for the hard shoulder and bump along through the gravel until it had passed.  There were a couple of descents to river and creek crossings which had single lane bridges and stiff climbs the other side.  Again I was lucky and passed through these narrow, no shoulder points without a truck appearing.

10 kilometers up the road my route turned off onto much quieter country lanes heading to Selbourne.  The hawthorn hedges were now sheltering me from some of the cross-wind. 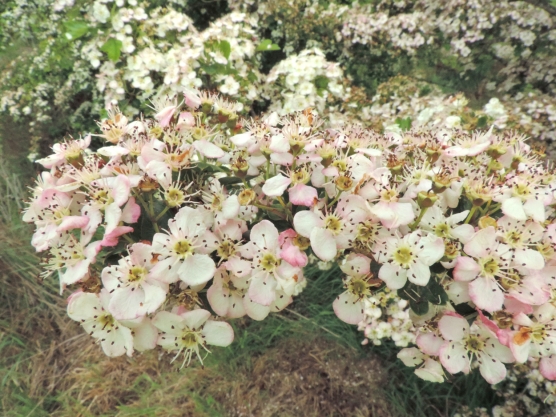 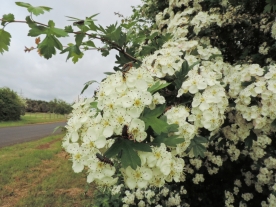 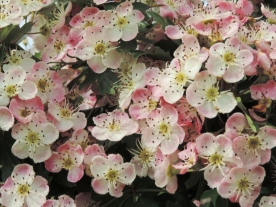 The pinker blossom is now out so on Wednesday the road was decorated with white, pinkish and very pink hawthorn blossom.   All over the blossom were insects known as “Push-me-pull-you’s”.   They spend a lot of their time in sexual congress, linked by their rear ends while roaming around getting on with their lives at the other end.

By now the side winds were getting stronger but not impeding progress too much.  There was no traffic on this stretch of the trip; only 1 piece of ag equipment that chugged past with room to spare.  After turning onto the Four Springs Lake road after Selbourne, I wondered how much of the dirt to the lake I would actually be able to do.  The clouds were thickening, wind in the face again and a little bit of cloud spit in the wind.  OK let’s press on and see what happens.  It was not conducive to picture taking so I have included a couple I took earlier. 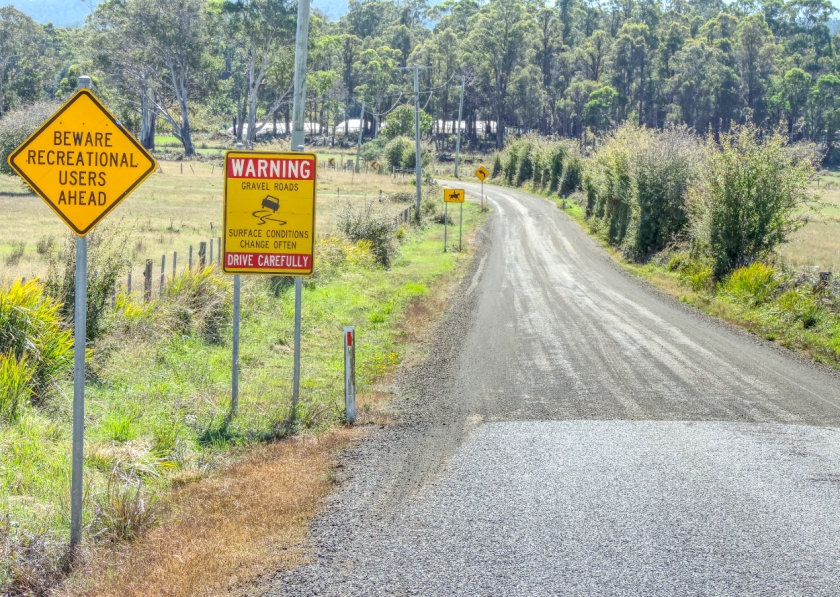 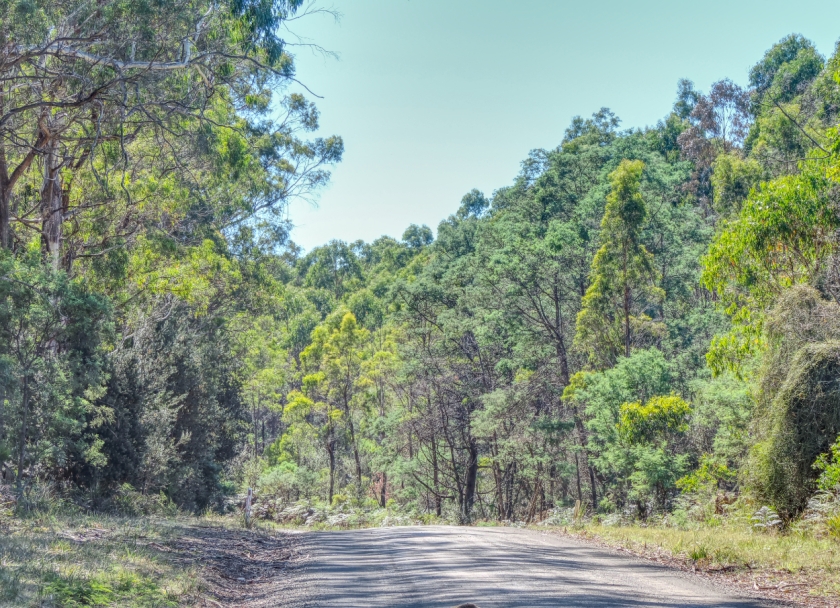 Along the road the Magnum went, up the gentle incline.  It’s a bit bouncy riding this trike on dirt as there is no suspension and my balloon style tyres were probably inflated too much.  Picking the best line through pot holes and over rocks becomes important and sometimes hard to do with the double vision created by going over the bumps at any sort of speed.  I was determined to see the lake but also determined not to cycle down the final hill to the very steep car park – getting out again would be a drag, literally, dragging the trike up by hand ! 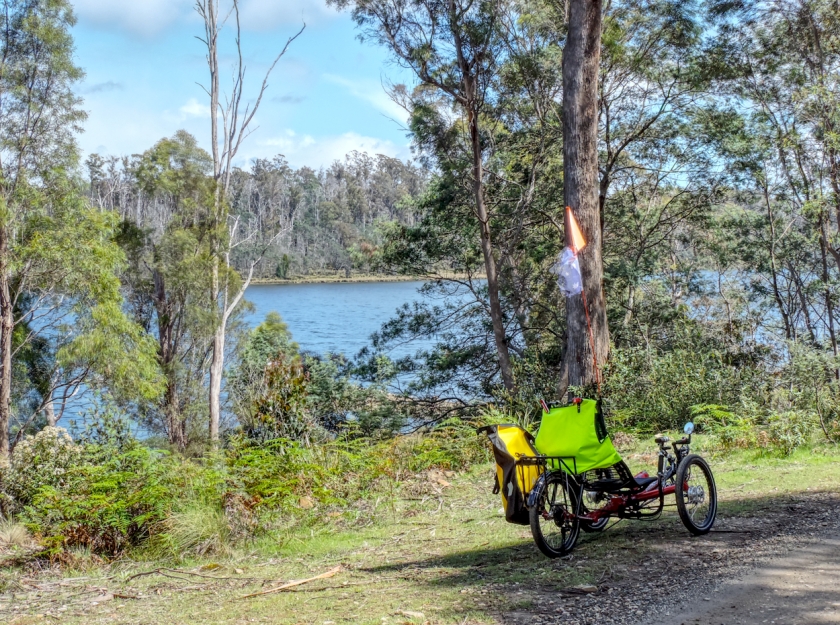 So, I stopped here.  Yes, the sky had cleared over the lake but the sky behind was heavy with cloud.  The wind was cold too.  Basically it was not a brilliant day for cycling!

The dirt road ride in had been a bit of a drag.  Going back was much better even when the wind spit came back.  I could now see the road was a gradual descent and, with the wind behind me, speed picked up remarkably.  The route picking and double vision grew more interesting.

Soon we were back on the chip seal and barrelling down the hills being blown towards Hagley.  There were some ups though which gave time to review the contents of the roadside gutter. 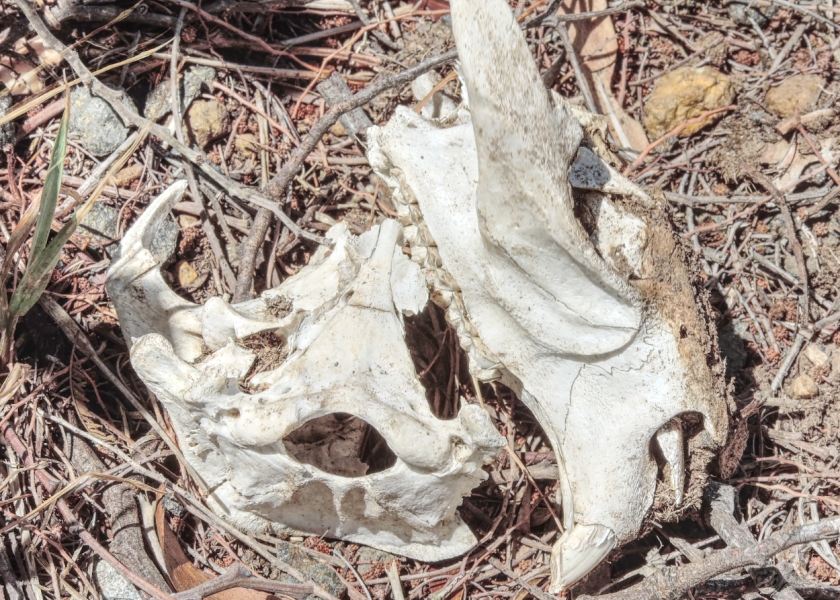 The slasher must have bashed through a collection of dead things as some stage.  These skull pieces were lying there surrounded by various bones but I can’t see that these were off the same animal.  Obviously there was a bit of sunshine here but that soon disappeared and the wind strengthened even more ahead of a quick rain storm.  The power lines sang their windsong and it was like cycling in snow as the hawthorn blossom was ripped off the hedges and scattered all around swirling along the road.

Should I stop and put on wet weather gear?  Will these clouds pass quickly and the sun come out again?  No I didn’t, yes they did and the sun soon appeared to dry things up while the wind backed off a bit.  On arrival at the junction with Meander Valley Road I stopped at the little park c/w BBQ shed and had a look around at the sky.  Do I need to get under cover or go on?  It looked promising for the remaining 5 ks to Westbury and the car.  OK, let’s go; once more into the teeth of a strong wind.  I am guessing the average speed will be down today.

Just before Westbury I spied the sign for the cafe and then passed the cafe itself.  Couldn’t stop though as the cash is in the car and the rain has started once more just after I took this picture. 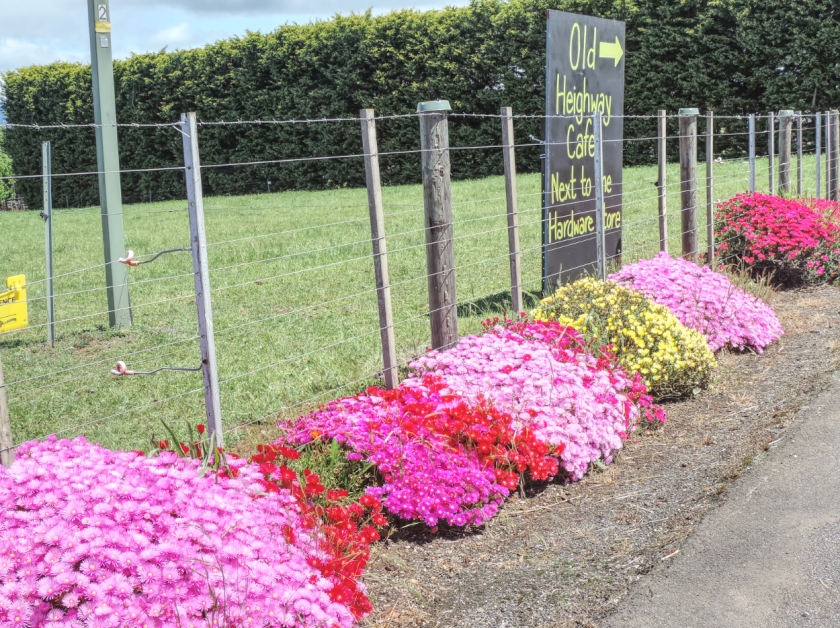 We cruised down the highway to the main street, cycled up the main street and round the corner to the waiting car – all in quite a heavy downpour.  Started to get stuff in the car and the sun came out again!!  Back to the cafe.  Raining again !!  It’s Spring in Tasmania !! 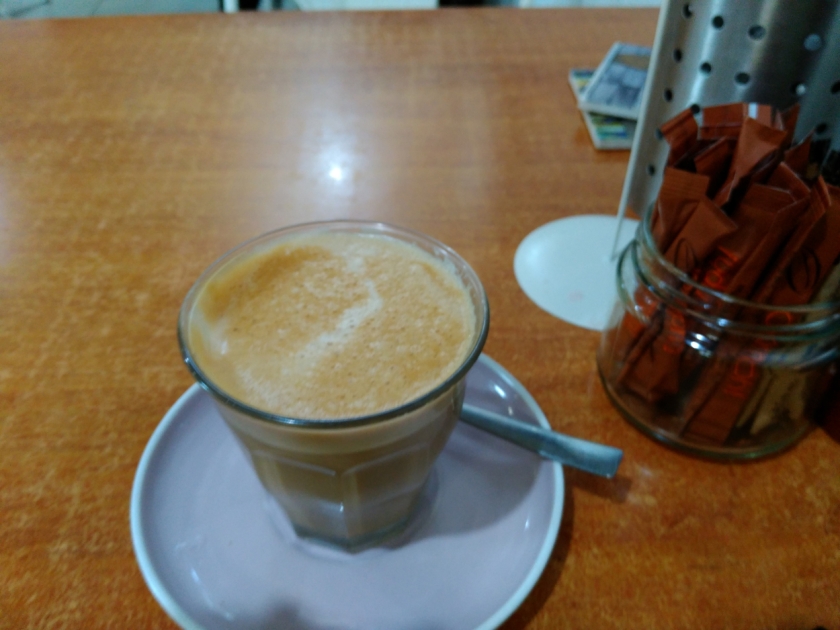 Maintenance.  The chain dropped off the cogs too many times during the Four Springs  ride when changing down to the small chainring.  I reckoned I might have mounted the small ring the wrong way round.

So, before the next ride, I took the crank out and turned the small ring round.  It looked like the sprockets would now sit out an extra millimetre or two and maybe better catch the chain as it comes off the middle sprocket.

Testing.  After turning the cog around I took a test ride to Bishopsbourne.  Result?  Perfect change-downs each time !!  How good is that?  I had a 50% chance to get the chainring on right the first time and got it wrong.

Sun-damage fixing.  The cream is making the sun damage areas on head turn red.  I can still wear a helmet and so can continue cycling so far.  Next week the red should start to turn into soreness which may prevent cycling longer distances.  I am hoping I can still get enough distance in to give the challenge of 5,200 k in the year a shake.