I am starting to feel more confident riding longer distances on the Anura and so I thought I would give the above loop a go as it adds more hills to the mix.

The loop incorporates the first part of the PoWs Friday ride along River Road.  Then it turns right along Porter’s Bridge Road to Exton.  A quick left and right takes us Exton Road to Osmaston where a right joins Osmaston Road and goes up “Heartbreak Hill” to come out above the Deloraine Golf Course.  Then it’s a short ride back to town.  Apart from the first 4 kilometers it is undulating – according to most cyclists.  To me it is Hilly.

We start by the overflowing weir at Deloraine where recent rains are still powering the Meander River.  Upstream the Huntman’s Lake has been developed as a trout fishery and does help manage minor flooding in town.

Today it is cloudy, cool and with little wind thus good cycling weather.  Setting off, I feed in what power comes from my legs slowly, to warm up.  Soon we were travelling at a comfortable 16 – 17 kph through the flattish agricultural first 4 kilometers.  There was not a lot new to look at until I met “Deloraine Ken”, out for a mid-week ride, coming the other way.  He reported that the band he plays in had a good gig playing medieval music at the Deli a few days back.  We continued our separate ways.  Into the trees and it was quite noticeable that logging is going on.  From what is left it would seem that the focus is on plantation forests that are now harvestable.  New roads have been pushed in and there is a bit of crap on the road where these exit.  Apart from that the roads are clear and I didn’t meet a log truck on this section.

Grey skies at the junction with Porter’s Bridge Road. Logging activities were a bit more noticeable here even though the warning sign has disappeared.

Through the roadside trees the empty spaces created by clear felling can now be seen.

Looking down into the logging coupe some extent of the results of activity is visible.  The smoke to the left of the vehicle is coming from an area still active judging by the noise.

Luckily this is where I leave the logging and progress through country with silver wattle flowering and non-plantation bush untouched.  Interestingly I couldn’t smell the wattle and wondered if that was because it was a cool day.  Does the sun heating the flowers bring the scent out?  Dunno.  Not much bird life evident through this part and only a couple of dead furry things by the roadside.  So, apart from my tyre noise and breathing, it was quiet.

River Road is hilly and Porter’s Bridge Road continues the theme.  From the above point there is a fair old climb to the top of a really good downhill section.  52kph achieved today – my record to date on the trike.  Then it is yet more up and down until the final drop to the bridge.  Occasionally I thought I could hear a log truck somewhere behind me.  No trucks appeared and I worked out the noise was coming from the differential with the pannier acting as a soundbox.  It only happened when the trike was at speed – so only when we are going downhill. 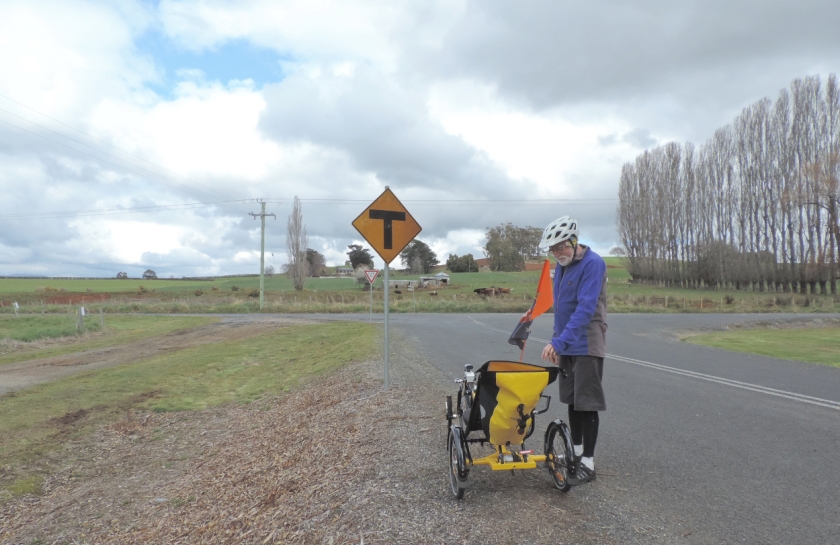 Where did it go?  It’s in the bag somewhere.  Where’s my sandwich?  After Porter’s Bridge the road goes straight and flat to another bridge, this time over the Bass Highway.  Then it’s a freewheel to the point above – the junction with Porter’s Bridge Rd and the Old Bass Highway. 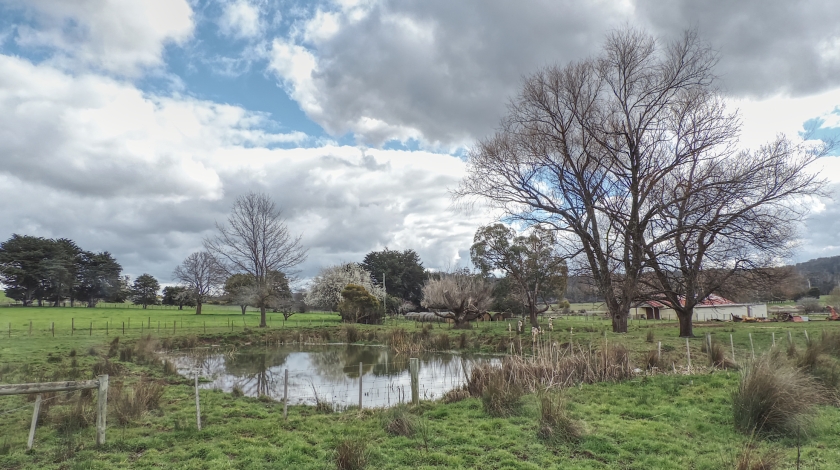 Just behind me in the previous picture was this winter scene.  The white blossom in the centre says Spring is on it’s way.  On an early ride this week I saw two Hares in a field.  They were not doing their mad dance but just sitting there – obviously ready but waiting for Spring to be Sprung. 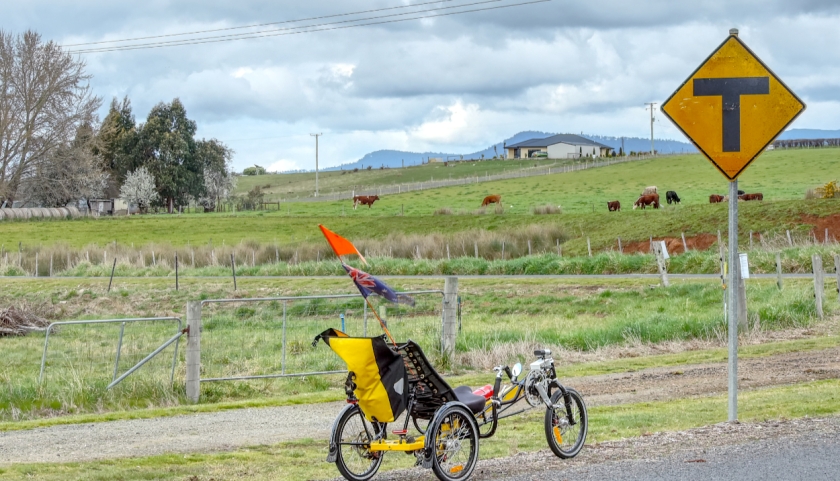 The route now takes a left and then a right up that hill past the house.  It looks OK from here but turned out to be an M3 hill.  M = mountain drive engaged.  3 = 3rd cog on the back with the 1st being the largest.  Ie – it needed a low gear to climb it!!  On the way up I was able to watch a skylark ascending and some smaller birds I scared out of the roadside scrub.  They weren’t quails – don’t know what they were.

Once over the hill (Oh! I know that feeling) there was some downhill before another climb.  Then there was a good blasting 45kph downhill with a somewhat slower freewheel down and past the berry farm to the junction with Osmaston Road. 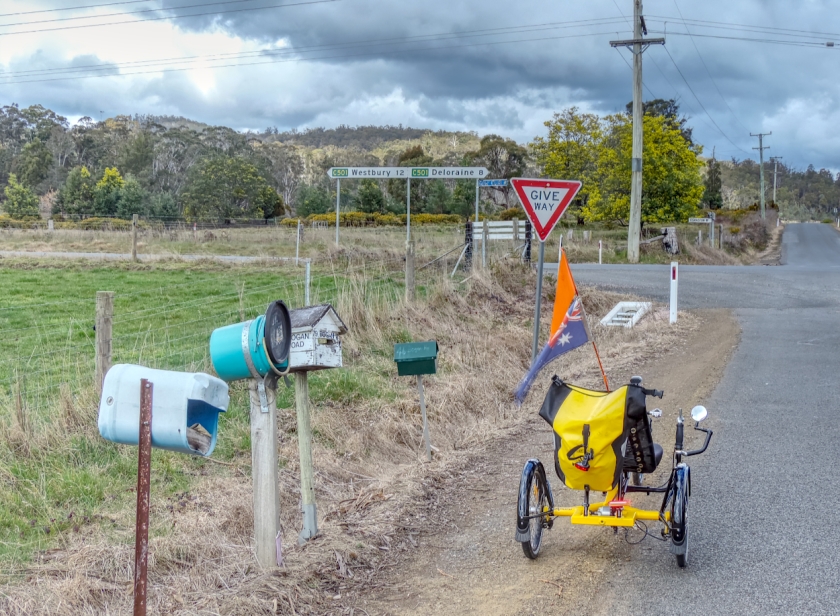 I stopped there to take on water and prepare mentally for climbing “Heartbreak Hill”.  This is what I had come for – to test the legs and trike on the hill that, last summer, I was able to climb (just) with the unloaded touring bike but when it was laden I had to stop just after the really steep bit.  How would it go today?  Let’s find out!!

This is a picture from January 2018 when I tackled it with full camping gear on the Vivente.  The hill doesn’t look much and for many cyclists it is just a bit of a work out.  For me it is a challenge!!

The trike ran well up the “foothills” and we were pulling M8 for quite a while.  Then dropped to M7, then M6 before getting to the stages that are listed as 9% and 10%.  By then we were in M1 pedalling well and speeding along at 3.5kph.  The hill was climbed mostly in the 3 kphs and where it flattened a bit the gears went up to M2 then M3 and speed rose accordingly.  YES.  Done it!!  AND my crappy breathing was taxed only slightly on the steep section instead of gasping for air as on the Viv.  Trike riding is pleasing me!!!

Over the top and building up speed we approach the Golf Club.  Lots of cars there and lots of people milling about the greens so when arriving at the small uphill just by them I had to pedal away to show how easy it is to ride a recumbent up a hill.  Bugger – the knees hurt after that.  What a silly thing to do.

Easing off I turned right onto the road running down into Deloraine and took things sensibly – but we still cruised along at 17-18 kph which I was pleased with.

I was packing the stuff back into the car and had started wheeling the trike to the back when a voice said “Hold on”.  The bloke in the next car wanted to check out the trike.  He did – and then he had a short ride up the road and back.  Most impressed, we then talked trikes some more until he just had to ask how much they cost.  I am not sure if the price put him off – perhaps not as he started to say “Hmmm.  Not that much more than a good Mountain Bike”.  The lady sitting in his car did not look that enthusiastic though.

So, all up a successful 29.5 hilly kilometre ride and the legs aren’t complaining this afternoon.  What next??