But first, I recently found this slide converted to JPG.  It was my first Sydney bike back in the mid ’70s.  The picture reminds me of unit (apartment) living, bike inside on wet days and bush walking (backpack).  The continuous printed stationery on the bike rack shows the way we programmed computers then – input by punched card and output as a roll of paper.  Ah, those were the days – no screens, all hard copy.  I can remember carefully attaching the printout to rack in case the whole thing unrolled along Dowling Street on the way to Waterloo.

It was certainly no colder than southern Victoria (or Glen Innes!) in Tasmania this week. Most days started around 0°C at 6am and warmed to double figures after the sun appeared. When the sun didn’t appear (fog and/or grey skies), then it was just into double figures and felt rather chilly. 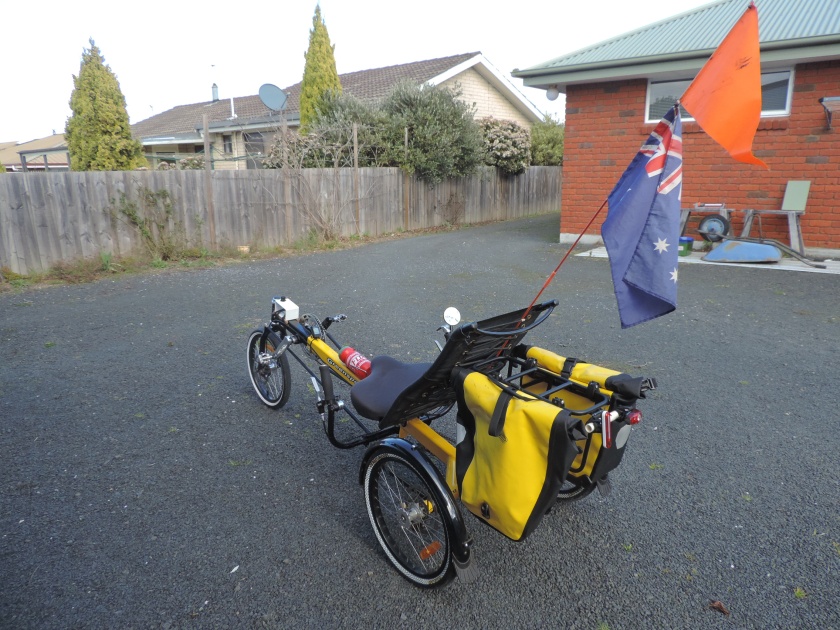 I pulled out the rack Ian Simms of Greenspeed reckoned would fit the Anura and spent an hour working out the best way to mount it.  It fitted and the panniers were finally mounted after a search for the “clips within clips” that allow installation of the bags on different thickness bars.  There seems to be plenty of room for pannier expansion (should hold gear OK) and for the top bag to be installed too.

Looks like a shake-down trip to Liffey Falls will be in order once it is slightly warmer.

Before we set off to the mainland I briefly met Colin from Longford who has been building a Warrior trike using plans from the US. We met up on Saturday for a ride.  Colin’s trike was recently finished and has a few bits of sorting out to do.  That said it already runs pretty well.  We rode out to Woolmer’s to check the progress of the new bridge (not finished yet) and then on and out to the Midland Highway before turning back.

Here is a short video of our ride : Click Here

Trike.  During that ride and a previous short spin around town, the knees were complaining a little.  I remembered I had planned to push the boom out a bit and so spent some time doing just that.  “Pushing the boom out” basically gives more room between seat and pedals so allowing more leg stretch.  Everyone on the ‘Net says it is important to get this right to protect the knees, so I used the “ruler” on the under side of the boom to track what was happening.  It is now extended by two units and things feel better.  Will I go one more?  Don’t know yet.

As well I read that, for recumbents, the cleats on the shoes should be further towards the arch of the foot than for diamond frame bikes, so I thought I would give that a go too.  By Wednesday I was ready for a ride with extended boom and re-positioned cleats.

All info was gathered from the Internet – what would we do without the ‘net?  Oh yes, I wouldn’t have a trike at all!!

Brompton.  There is an on-going problem of cold air affecting the operation of the trip display unit – it does not recognise WiFi signals coming from the wheel unit.  Because of the Brompton construction the closest I can site them “normally” is pretty much the 800 mms which is the limit written into the ‘destructions’.  I wondered how to get the two units closer together and after a while pondering over special brackets and that sort of thing, I saw the light.  The handle of the bag is a solid affair and perhaps I could clip the display to it.  I checked and I could.

A trial run on a 2° morning showed it worked!!  The only problem was running foul with the cables hitting the bottom of the display.  That action pressed a button and changed the display.  No data lost, it just wanted to know which language to display in.

Riding in these 11 days.

All riding in this period was around local lanes.  It was good to be back on them after the mainland. 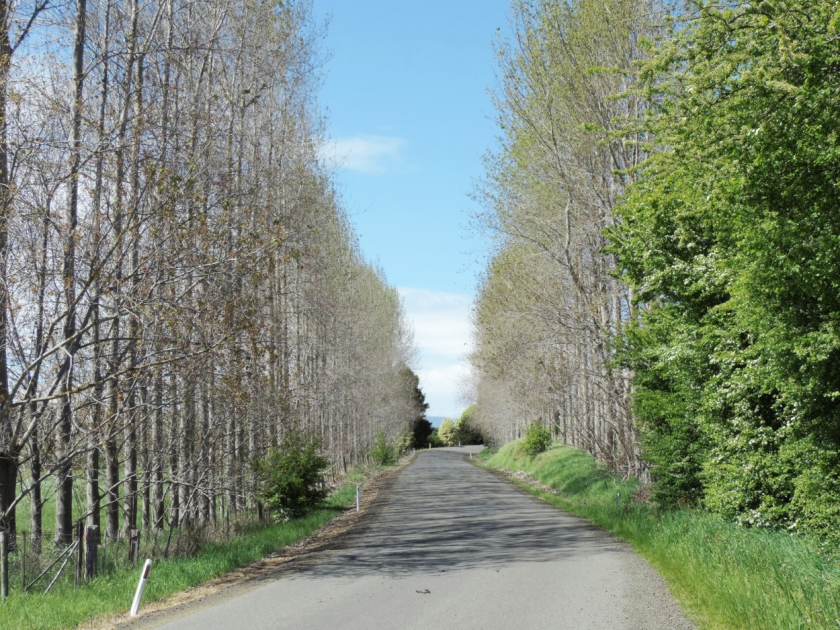 Trike.  Saturday – the trip to Woolmer’s and beyond.  Wednesday – out to Bishopsbourne and back via Wilmore’s Lane.  Nice, sunny day without a lot of wind and a good steady ride.  Saturday – Bishopsbourne again with Colin.  The riding position is working well and I think I will leave it as is for a while.

Brompton.  First Friday the River Road loop at Deloraine meeting with the group and testing the mountain drive on the hills.  Result – an easy ride but very slow on the hills.  That’s OK by me.  On the way I found a small Australian flag by the side of the road.  It is now installed on the trike.  The group did not ride this Friday as the weather was rather wet.

Next week we will be taking part in the Launceston Tweed Ride.  Looking forward to the Pimm’s and cucumber sandwiches afterwards!!