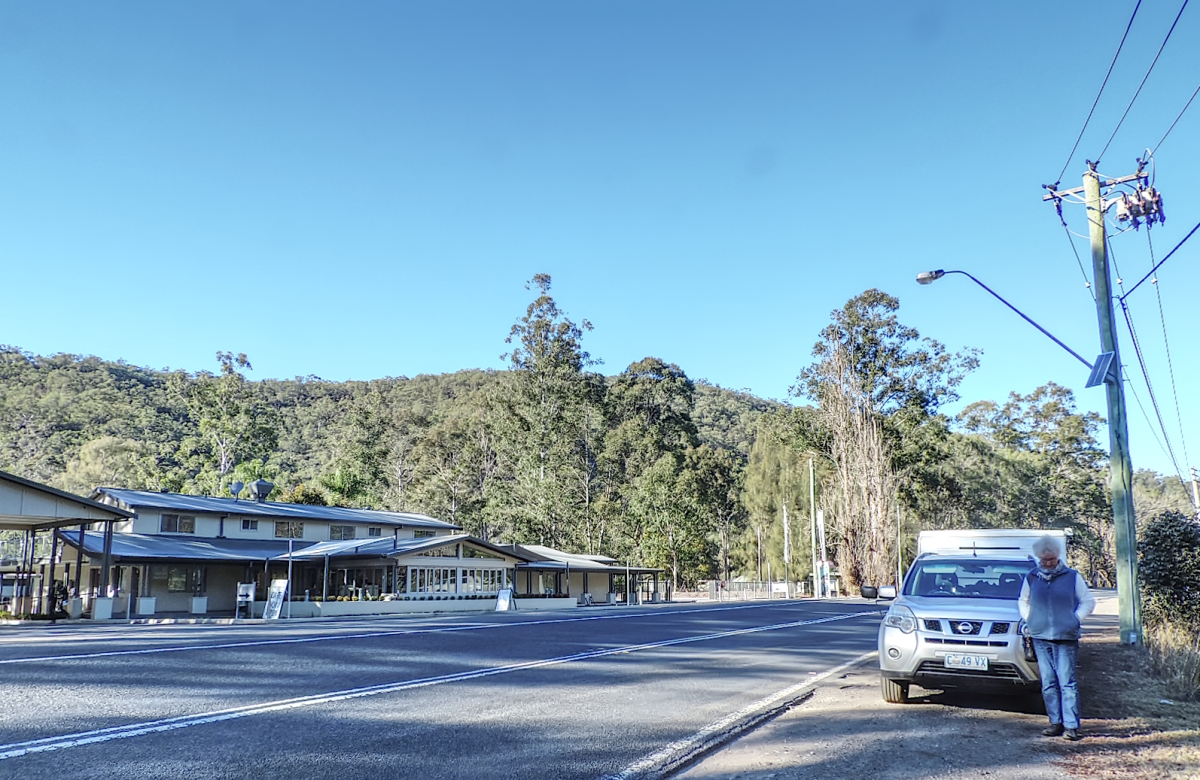 Not much was open for coffee in the morning so we took off on a surprisingly hilly leg through Blaney to Bathurst.  I was tempted to take a run around the Mount Panorama road race circuit but with the caravan on the back ..  No.  Hanging out for a coffee and maybe some raisin toast, we were displeased to find we bypassed the town centre!!  Oh well, on to Lithgow.

At Lithgow we stopped and were unsure as to what would be available in this coal mining town.  What we found was a surprise.  On entering a cafe with the windows steamed up we were welcomed by two blokes who certainly had a great Caribbean soft drawl.  They made good coffee and even better raisin toast which was taken while listening to reggae music at a “just right” sound level.  That improved our morning mood no end.

From Lithgow we traversed the Blue Mountains via a ridge at around 1,000 meters along which runs the Bell’s Line of Road.  For most of the way the sun was out, the sandstone cliffs with green grey gums were stunning and the road lightly vehicled.  I like it. 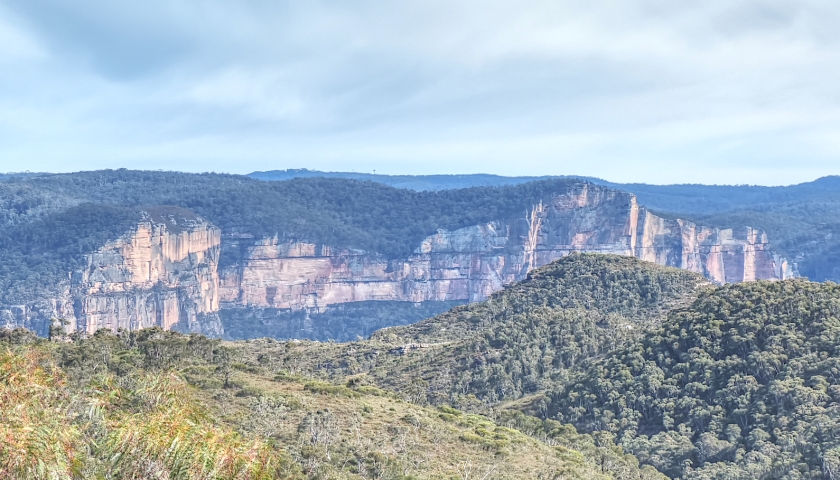 The sandstone cliffs of the Blue Mts National Park

Looks nice but it was really cool up here 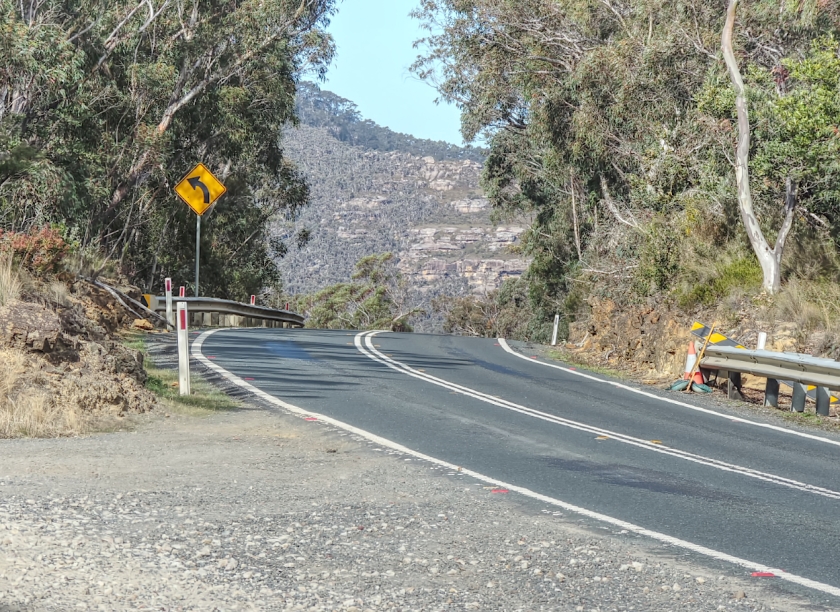 This was a nostalgic trip for us as when we lived in Sydney we did plenty of bush walking in these surroundings.  Passed the turn off for Mt Wilson but decided against adding the canyon to the trip (see previous post).

One comment re cycling : Bell’s Line of Road – dodgy.  No hard shoulders, many bends, fast cars enjoying the challenge,

Ending the day in a caravan park for a one night stay at Vineyard and we reckon we have had a good few days.

Vineyard caravan park is one to which we will not return – enough said.

Tuesday was a day of skirting round Sydney as there was no way we wanted to get mixed up in the traffic.  So we took off up the Putty Road swinging inland a bit up to Maitland.  We used to travel up this road to the Colo River to go canoeing.  We remembered the time a friend was with us perched on the middle of 3 seats in the canadian type canoe when Ted informed us he had been diagnosed that week with Legionnaires Disease and if his temperature rose above a certain point we had to get him to Hospital, quick.  All was well luckily,

The GPS took some delight in resetting itself after a little way.  From 240ks to go to Port Stephens it suddenly decided the distance was 410k instead.  That was a bit worrying!  Anyway we pressed on driving the ups and downs and bends of the Putty Road  – initially another ridge at around the 1,000 meter level.  More great views Sue informed me as I watched the road, the bends and rally drivers.  It was 165k to Singleton and we were way behind schedule if we still had 280k to go.  The GPS then told us to turn right and I said “No”.  As it reset it then decided we only had 120k to go after all. 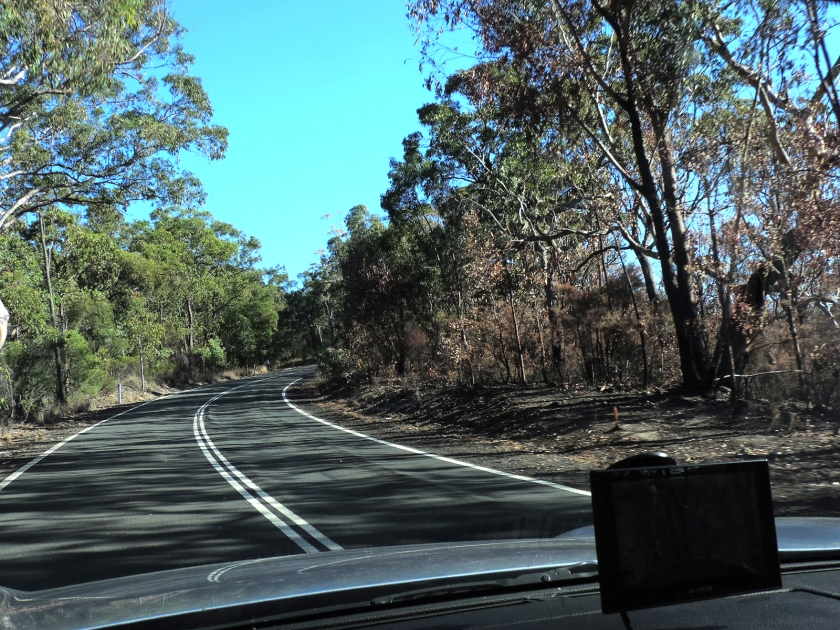 At some point along the Putty Road we spotted the Colo Bra tree festooned with – you guessed it – bras.  No time for a picture as a rally ace was on our tail.

We were heading to Shoal Bay on Port Stephens.  This was the scene of our first Australian camping weekend back in 1974.  Shoal Bay was a quiet, low density fishing village and holiday place.  Today it and nearby Nelson Bay have joined the tourist world and are filled with holiday apartments, restaurants and tourist tat.  BUT the beaches have not been stuffed up and quiet places can still be found.  We have 6 nights here so plenty of time to enjoy the crowds – it is NSW school holiday time and the place is packed.