We had a couple of good days around Wangaratta and then started the longish haul north.

First though some notes about our joint activities.

We spent a day touring (by car) the King Valley.  The day was misty in Wang but as we drove into the Valley the fog/mist dissipated, the blue sky came out and it almost reached 10°C at times.  A stop at the Witty Cafe for morning coffee and then a slow drive out to Lake William Hovell ended with us talking to the only other person out there.  He had driven up in the dark, scraped the ice off his kayak and then paddled out after trout.  He was busy cleaning up before heading back with 2 nice trout he caught, I was pleased to see, on a Tasmanian made Tassie Devil lure.

It was warm enough to sit out and have lunch overlooking this delightful lake.

Back to Milawa and the gourmet food trail.  We were aiming at the Wood Park Winery as we had a very tasty Shiraz from them the previous evening – in the pizzeria.  Right next to Wood Park was a cheese factory.  Guess who came away with lumps of cheese and a few bottles of the red stuff?   After this I unpacked the bike and rode back to the camp site via a series of cycle paths.  As I passed a breathalyser unit going about it’s business I wondered if they would call me over.  No today.  This area is full of cycle paths as cycle tourism (other than in the winter) is a big thing.  Because the going is flat!!

The next day we went over to Corowa to meet an internet cycling friend, Emily.  We had met once before last year and now Sue was able to meet her too.  We gathered at the Civic Centre, Corowa where I am sure it was still frosty outside – it was certainly foggy.  After a look through an Aboriginal Art Exhibition (and getting some warmth), Emily and I set off on the bikes.  She was showing me local river trails and the rail trail over to Rutherglen where we would meet Sue at the Wicked Virgin for lunch.  We rode along with Emily telling me all sorts of interesting things about the area while no doubt hoping I could keep up. 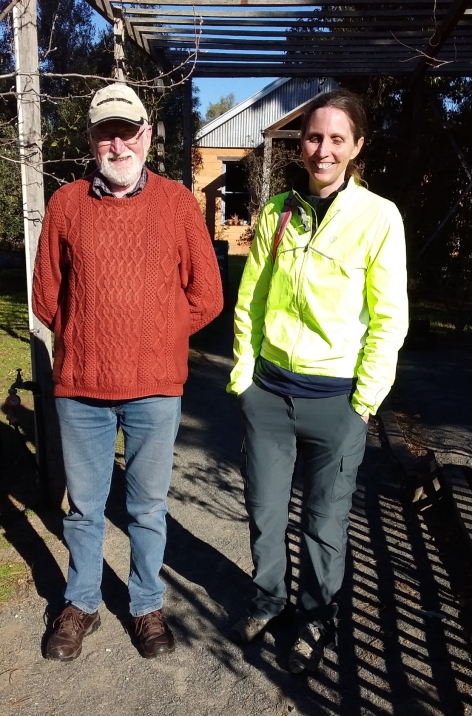 Cycling friends at the Wicked Virgin

We arrived at the Wicked Virgin (olive grower, olive oil producer and Cafe) and a sulphur-crested white cockatoo said “Hello”.  The sign by Charlie said he arrived there in 1941 after being taken out of a zoo due to his use of inappropriate language.  Could that be true – is he really 5 years older than me, 77+?  Do they live that long?  I looked it up and – yes they can.  Charlie certainly looks fit and healthy and is in good voice – good to go until 120!  Unfortunately Sue and I, joined by another couple could not coax it into vulgarity.

Sue had had an olive oil tasting before we arrived and was surprised at the varying tastes available.  Mine Host explained the ways the tastes differ – from the type of olive to the time it is picked and weather conditions.

We enjoyed a quiet lunch with good food and good conversation and Emily passed on two cycling books for us to read during the trip.  They were bound for the Op Shop so when we finish them that’s where they will go.

On Sunday we set off for Cowra some 400+ kilometers away.  The car plus caravan travelled well and we completed the distance in good time.  About half the journey was on the Hume Highway – an easy drive as it is 2 lane dual carriageway for 800 kilometers all the way between Melbourne and Sydney these days.  We lunched at Holbrook and read a series of signs about the development of the Hume there – the last by-pass to be built being the final link in the 800k.

As we pulled into Cowra we were warned to fill a jug with water for the morning – everything will be iced up by then.  Was it?  Read next week’s instalment to find out.

One thought on “Final days around Wang.”