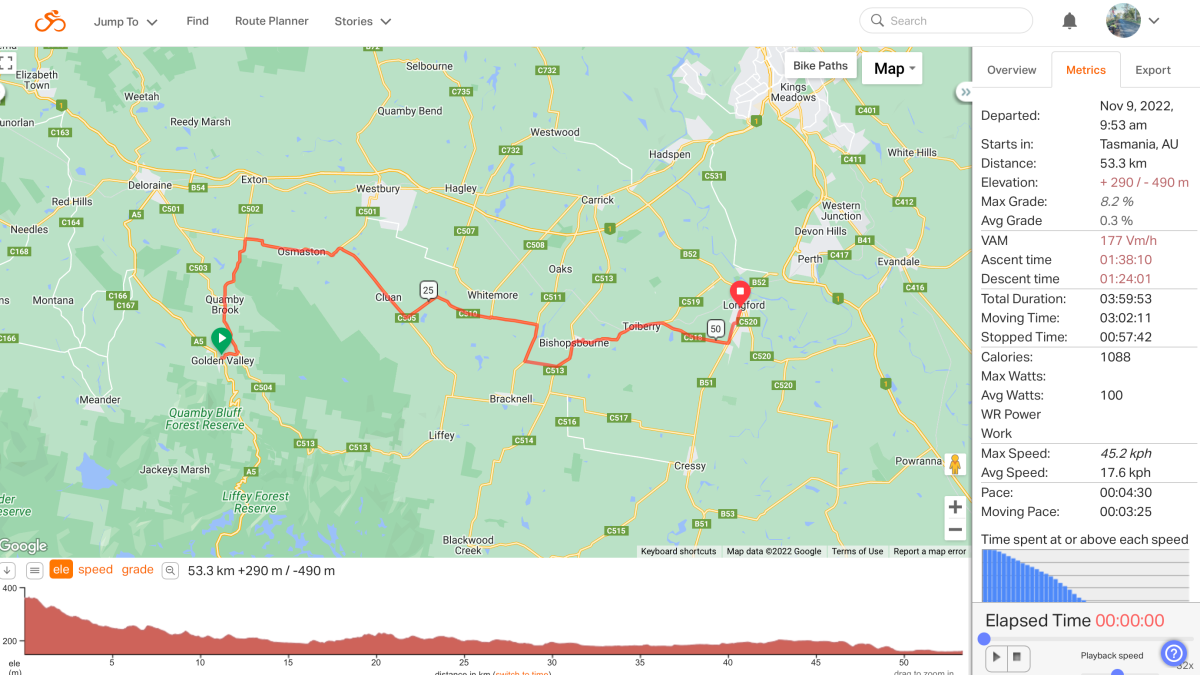 I woke at 6am after not a bad night’s sleep. The tent with it’s 3 person interior has enough room!

I can also report that living out of Corflute boxes is good. Very good. I know where everything is ‘cos I can see stuff and once used it’s easy to put the thing back in the correct box.

I stored the panniers and all three batteries in the trailer overnight. If, by remotest chance there was a battery fire, it would happen outside and not in the vestibule hampering my scampering – away.

So much space!! Plus I found I could sit in the Helinox chair in the vestibule. Creature comforts abound with this oversized but lightweight tent.

The campsite I had selected was isolated and mostly quiet. The road from Deloraine up to Great Lake runs past a little way off. That had a surprising amount of heavy truck traffic overnight – all using engine braking to slow down for the sharp corner nearby.

In the morning I saw most of the trucks were log trucks pulling stuff cut from somewhere on the way to the Lakes and carting it through to somewhere else. Maybe George Town as we could see a great wood chip heap from the other side of the Tamar at Beauty Point, last week.

I could also see the tent was soaked !! The outside soaked by a very heavy dew. The inside too, presumably because the air could hold no more water so condensation formed. The grass in the vestibule was soaking – but the boxes hadn’t leaked. The trailer was coated in water as was the trike.

I checked the Bureau’s website after and found the relative humidity had reached 89% overnight. I guess the air was laden with moisture driven by a hot day evaporating water left by the recent rains. As temperatures cooled overnight the air just couldn’t hold the load.

The sun was starting to rise so I positioned trike and trailer so they could sit in the sun then I made a cup of tea. There was no hurry so I took in the delightful scene listening to and watching the birds calling to each other. Gradually the trike dried but the trailer top did not. Most of the trike is black – was that a factor? The black plastic mudguards dried as fast as the seat and metal frame. The Corflute top to the trailer just didn’t dry! I assume the white plastic doesn’t absorb heat like other plastics?..

The tent was positioned with a large hedge between it and the sun. I gradually breakfasted and coffee’d and packed up the trailer and panniers getting ready for the off. 9.30am and the sun had been on the tent for about an hour. It was sort of dry and the park has a 10.00 get-out time so down the tent came and was rolled up as was. The footprint was absolutely soaked but it packs into a bag of it’s own so that’s where it ended up.

And off we went.

The first leg was a speedy descent down Bogan’s Road. Rather, it should have been speedy but it was immediately apparent that I was sharing the road with log trucks!! The first indication was a rumbling farty noise from behind from engine brakes and round the bend I saw in the mirror a giant chrome bull bar glinting in the sun – with large truck attached. I headed for the gravel and got out of its way pretty smartish. It gave another loud fart as it got ready to roll past – why? Just for fun I think.

Empty log trucks were going the other way. They were really shifting so I moved over for them too. This wasn’t supposed to happen!!

On the way down Bogan’s Road Ernie appeared. He had stowed away somewhere in the kit. Now he wanted to take a closer look at signage for some reason best known to a small plastic TV personality. Here he is sitting on the Distillery sign. Using a car door for signs reminded me of the “Car Door Tour” at Lightning Ridge. That was a day!!

Ernie also elected to hang off the Reserve sign to check out all the things he is not allowed to do in there. This reserve has preserved some very nice bush. Most of the trees are of the same age so maybe it was created after a logging event – or a fire event.

Close to the bottom we passed the road to Liffey Falls. These are the post boxes for the residents living up that dusty track.

Having survived the log trucks, I turned right heading towards the junction with the Cluan Road some 6 ks away. I hadn’t used much power as yet so left the smaller battery connected and headed for the junction. There was a slight wind behind and a lot of the way was also slightly downhill – always a good mix. We cranked away in the low 20s for quite a distance.

Turning onto Cluan Road I pulled in, well off the roadway, to change the battery over. As I was tugging at the battery to disconnect it a vehicle came past with horn blaring and driver yelling. Looking up I saw there was also a fist being waved out of the window. It was a white ute with steel plate work boxes on the back and a “P” plate visible. “P” for Provisional Driver and not Prick. Someone who has passed their Learners and is on probation as a driver for 2 years!! Will this dick head make it or will he have to do his Learners again?

Turning right I noticed he was tailing a black ute and they both took off at a extraordinary pace, revving it out in each gear. Dick heads.

After that interlude I set off heading towards the 4-5 nasty hills with no visibility at the Crest. The first thing I encountered was a garbage truck. It came up behind and there was a stand off with someone driving the other way. Eventually they sorted things out and I returned to the road from the gravel. “Bugger” I thought. Log trucks, dick heads and now garbage trucks – as another garbage truck came into view going the other way plus a gravel truck came up behind. Oh dear.

A thought appeared “Aha – it’s rubbish day in Westbury and the trucks come to the tip along Cluan Road to empty out”. They should disappear once past the tip as will, hopefully, the gravel trucks. I met a few more trucks and each time we were polite to each other and they was no hassle – apart from them actually being on the road that is ! They were thinking the same about me I am sure. The numbers did diminish after passing the tip.

On the third nasty, visibility poor hill I was slowly climbing it when I heard a racing engine behind. The mirror showed a white Ute speeding towards us. It also showed the driver wasn’t moving over the prescribed 1.5 metres or more. I hit the gravel again and it roared past on full blast inches from the trike. Yes, a “P” plate on the back showed it was the same bloke. I advised him that I had upgraded my opinion of him from Dick Head to Fecking Nutjob.

I continued to climb the rest of the nasty hills wondering if I should pull the camera out and have it running, just in case he returned. Then I would have something to report him with.

Still fuming, it was but a short ride after the last of the nasties to my proposed turnoff at Glenore Road. Rolling through the countryside with good visibility all round, this rural road had a calming effect helped by the polite drivers met along the way. The country salute was given and received and a couple of friendly toots were accepted with a smile.

Conditions were good, the battery holding up well and all the way back to Bishopsbourne was a normal rural ride. I had a call from Ken earlier. He went for a ride and on returning home was worried how hot his Bafang motor was. How was mine going he had asked. So on the way to the Bishopsbourne sports ground I upped the power level to 5 or 6, hung in top gear and made the motor really work.

At Bishopsbourne I pulled in and felt the motor casing. It had been working in the sun for some 3 hours and had climbed some significant hills. Yes, it was warm but not hot. I was able to place my hands on it and it felt like the outside of a hot cup of tea. Ken reckoned his was much hotter so may have an overheating issue.

There’s a new set of signs at Bishopsbourne covering the Traditional Owners, white history (good and bad) and information about the surrounding area.

After having a read of the signs I swapped batteries for the last time. There was plenty of power in this one so I didn’t spare the horses on the short ride back to Longford.

Thoughts after the ride:

I can still handle camping physically but it is a bit more difficult compared to last year. Mostly to do with me being less pliable so things are more awkward. We shall see how the season develops.

Trailer and boxes. Worked really well; so nice to know where everything is and easy to get at. All Corflute survived this first trip.

Towing trailer. This only becomes an issue when climbing. General riding was OK as the trailer is not really noticeable; it even handled the speedy diversions onto the gravel OK. Climbing is another thing! Once climbing a decent gradient all that weight can be felt. Still, the same is true if the weight is on the trike in panniers and bags. I can’t work out at what grade everything becomes a drag because Ride with GPS doesn’t deal with gradients very well. I don’t trust it!!

Rohloff. Worked perfectly of course!! I am thinking that I had better downsize the Bafang chainring though as I was unable to move the trike from a standing start on a test hill in bottom gear without using power. The old legs just don’t cut it with current gearing.