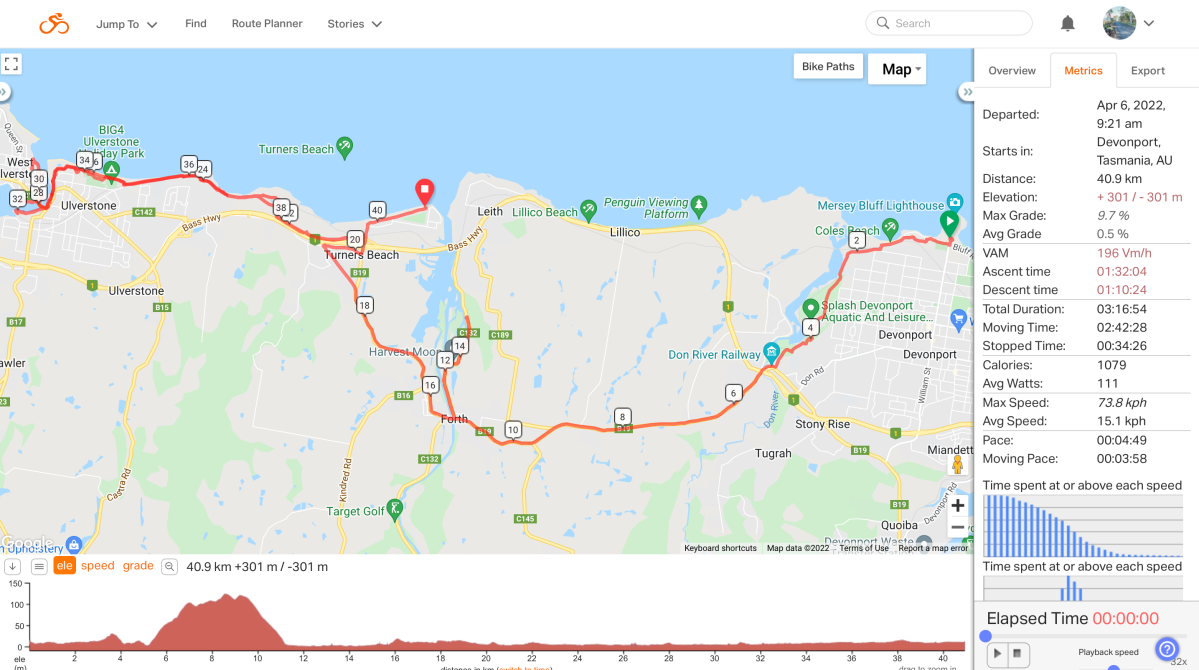 A trip to Ulverstone

Rain stopped sometime overnight. Outside the tent was remarkably dry. Plus the somewhat sandy ground had absorbed all the surface water. Did it rain last night?  Yes, it did. The water in the corner that got in via the power cord slot proved it.

The morning was grey and overcast, breezy and cool, not really encouraging one to go riding. What to do?  It is supposed to become sunny later – let’s go to Don and then see what’s happening.  Just in case I was going the whole distance I had charged two batteries so I could go a bit faster using the higher power levels with carefree abandon!

I got out my cool weather riding gear including a winter top and leggings. Had a think about that. If the weather improves then I will be a bit warm but that’s better than freezing if it doesn’t.

On the way out of the caravan park there were signs of yesterdays rains. Gravel had been washed into the driveway and across the road at the bottom. The top layer of leaves, pine needles etc were all heaped up on top of the grass, forming ridges of material.

The track through to Don showed more signs of rain- material washed onto the surface – plus not a few puddles. The mudguards worked well keeping trike and Tony dry. I came across another set of track sitters, using (coats?) to allow sitting on on damp tarmac.  All the yellow tape had gone and tracks were now open with the burn off sites assuredly extinguished last night. At Don the skies were still grey but not ominously so. It was certainly not raining so .. OK .. let’s head to Forth. I found the correct road and checked I was right with two walkers. “Yes, that’s it” said one , “Good Luck!” said the other.   Oh dear, I know it’s a climb out but is it that steep?

It was steep but I had the two batteries with me and I wasn’t mucking about. The road wasn’t the best for cycling. Narrow lanes, bends, crests and an edge of road curbed to about axle high. No dodging to the gutter here.  So I upped the power and climbed fast.

Up, up and around, down a little then up some more. The B-Double truck / trailer combos were the worst – they always give the impression they are on piece work as they rush about.  The trike was going well though and I made sure we were in the danger zones for a minimum amount of time.

Finally it was time to descend into Forth. A good downhill run with nothing behind for quite a stretch. As I rode into Forth we went past the 50 kph speed limit sign at 52 kph. On the last bit a B-Double had caught up but by the time he was close behind we were both travelling at the speed limit and the driver seemed quite happy to stay back a bit. Thank you sir.

I took the Leith turn and enjoyed a few quiet kilometres. Along the way I stopped by the river (Forth) for some pictures – there wasn’t much water in it.

At this point the river seems to be a bit dry with only a narrow channel flowing. Back at Forth the river looked normal. Perhaps I was not standing by the main river?

OK. Turned around and went back to Forth cycling past a huge irrigation farming business. Ah, Houston Farms – large scale salad and veggie growers. A question to be investigated – is this farm taking all the water out of the river? Or, does the actual river flow elsewhere?

After this I noticed Houston Farm signs everywhere. What a big business.  I suspect the truck traffic on these narrow roads is all to do with the Farms too.

The correct road to Turners Beach was a bit better than the one from Don to Forth. Still not that enjoyable but the good thing was it was a short distance to Turners Beach. From Turners Beach I took the shared path into Ulverstone and rode around for a bit.

For Turners Beach to Ulverstone I was back on a section of the Latrobe – Wynyard shared path. It is a well used pathway too with cyclists and walkers using it. Take note Councils – build a shared path and people will come. I rode along Beach Road through the park area, down to the wharf then across the Leven River bridge and onto the trails on the west side.

Coming back past a sports ground (Ulverstone Soccer Club?) I noticed a congregation of hot rods and small caravans plus a few teardrop vans. I guessed it was the epicentre for all the hot rods about the place. Plenty of interstate number plates were on view so it must be an interstate rally / tour.

By now the day was really beginning to cheer up and I was getting warm. A little while back I had shed a couple of layers and there was nothing else to remove without risking sunburn. Anyway, it was getting towards lunchtime and I decided to go and check out La Mar at Turners Beach. A cafe I really enjoy but, last time I tried to get in, it was full. Not a sensible place to visit now Tassie has the highest number of active covid cases per head of population for any State in Australia. This time though it was light on customers and outside seating was available. I chose the veggie koftas and salad which were very tasty.

While I was eating, a Hot Rod turned up and the driver went to check out the trike. We had a chat. Yes, they were based at the sports ground in Ulverstone and it is an Interstate tour of the Australian Hot Rod Club. The driver and builder of the Rod has also built 3 recumbent trikes so we had a good chat.

After lunch I swapped over the batteries so I could zip back with power aplenty. Which I did.

In the evening, as the sun went down, I took a look at the Pioneer Headstones sitting in a fenced off area of the park.

While walking there I noticed a Kookaburra keenly eyeing up the grass for something to eat.

The Next Day – Time to return Home

It took me from 7am until 9.50am to pack up and store all the gear in the trailer and the car. Sue turned up about 8.45 and gave a hand.

We then visited the sewing machine shop in Devonport and Sue bought herself a new machine. Then we pressed on and returned to Longford.

There we unloaded and I put the tent up again to dry out the dew and air the underside of the attached groundsheet. When fully dry it was repacked. By then I was aching all over! I am thinking that car camping with all the nice gear is a thing for younger people or 76 year olds much fitter than I.

Colin texted me to say he has tested positive to Covid. He is feeling OK, like a normal cold so far. I RATS’d myself and am OK. Testing will continue for the next few days as they say 5-6 days to incubate but I am hopeful that Colin left Devonport before becoming infectious. Fingers crossed.