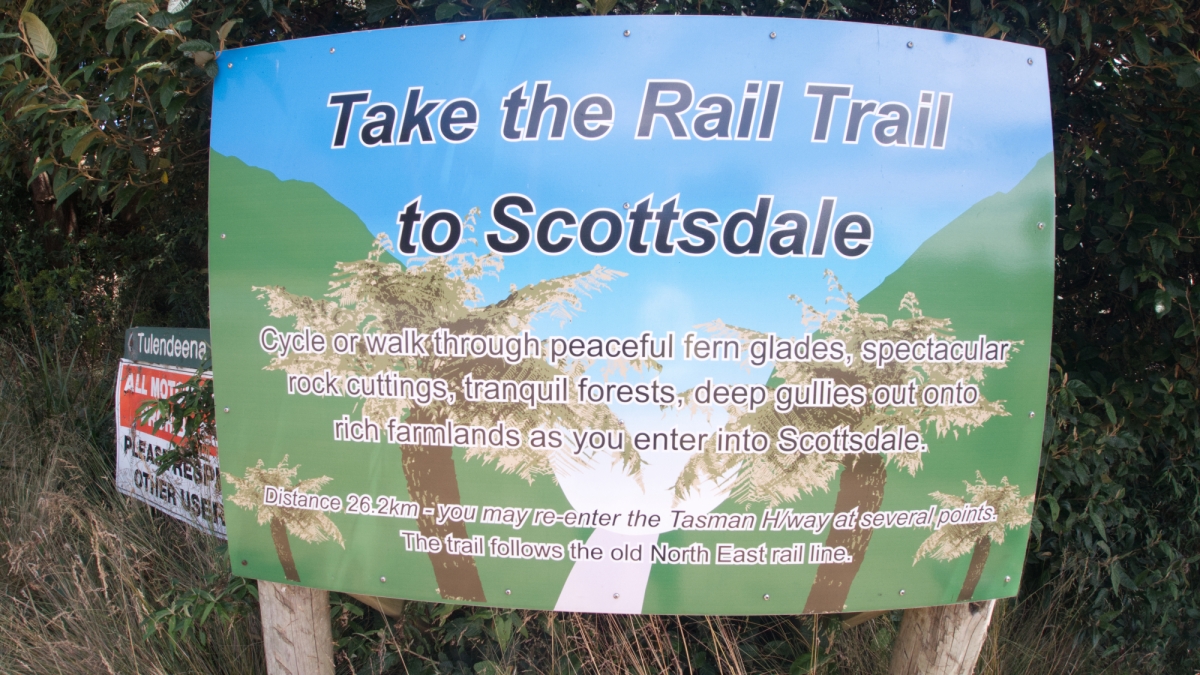 At the end of November 2015 I went to the opening of the Scottsdale to Tonganah section of the North East Tasmania Rail Trail. As part of this work the trail surface for the existing section from Tonganah to Billycock Hill had also upgraded. Sadly, since that time, further plans to extend the trail towards Launceston have been held up by Court challenges and Government enquiries while no further improvement to the track surface has happened.

In 2015 I rode my touring Vivente along the trail after the opening ceremony. I had ridden the Tonganah to Billy Cock section in 2014 and found the surface caused considerable jolting to my underpinnings which were still repairing themselves after prostate removal! In 2015 the surface had been improved to mountain bike standard. To start with the gravel bed the sleepers sat on was crushed using a big smasher brought over from the mainland (2014). Then a layer of smaller gravel had been put over the top (2015).

Since then I have ridden the trail a couple more times; once on my Dahon and once on the Brompton. The surface now varies depending on what time and weather has done to it.

In between times I always forget just how “lumpy” the trail surface is! Prior to yesterday’s ride I was remembering the Brompton trip – 16″ wheels but with rear suspension plus a sprung Brooks saddle = quite comfortable.

Colin and I met in Scottsdale and, after a coffee, drove out to the car park at Tonganah 10 kilometers out of town. By starting here we would miss out the 10ks of trail that runs behind industrial buildings and alongside the road. It would also mean that we would first climb the 16 kilometers at a consistent grade of 2-3% to the top of Billy Cock Hill before having a downhill ride back to the car park. A bit like paddling up river and drifting back. At least, that was the theory. In practise that light gradient and gravel surface ridden for 16 kilometers can be quite tiring on recumbent trikes without suspension !

Colin has a newly built rack on the back of his car to hold the trike. After it’s first outing it was apparent it needed some slight mods and these were done last weekend. This was it’s test trip ‘post mod’ and all worked well.

We had mascot Ernie Muppet with us to encourage us up the hill and urge us to use much more speed when descending.

The climb went up through cuttings that were sometimes earthen banks and sometimes through granite rocks. A lot of the time the rock from creating the cutting was then used to infill and create raised embankments to take the rail to the next cutting. It’s not hard to imagine blasting, pick and shovel work and an impatient Engineer wanting the section finished quickly.

A few birds could be heard but fewer seen. I did see a Spotted Quoll though. It was in one of the granite cuttings and all it could do was run ahead of me alongside the rock edge for some distance before it could take off into the bush.

A good sighting and, for me, rare. I haven’t seen one since we lived at Franklin in Southern Tassie. There they were well known for getting into chook houses and creating havoc.

Recent weather (wet and windy) has caused quite a few trees to fall across the track and some of the earth banking to collapse. All tidied up by the volunteers who look after the trail – much appreciated good people.

The gradient and the track surface kept our speed down and the various kilometre boards showed us just how slowly we were progressing. We were both cruising at our preferred speeds enjoying the views and trying to ignore the impacts from the gravel and bits of wood across the track. I will say again that you see a lot more when riding a recumbent compared to a 2 wheeler. For example, I hadn’t noticed all the “fill in” embankment work before as we rode the embankments between cuttings looking at the long drops off to either side of the track.

The gravel took its toll. At the end of the track (Billy Cock Hill) we had a discussion. Colin was feeling the climb more than me (of course the pedal assist on my trike helps!) and the day was warming up. Even with the assist, my legs knew they had climbed a good distance. The planned on-road extension to Ledgerwood was put on ice and we turned around to find a quiet spot away from the road and in shade for lunch. About there, a couple coming up the hill stopped for a chat. He was going well but she was struggling a bit. She told me she hadn’t ridden a bike for 10 years. Perhaps he should have taken her on an easier ride to try and persuade her bike riding is fun?

Refreshed we began the trip down.

On the way I tried the old trick of riding faster to smooth out the bumps. The surface is not a regular corrugation though so after much jolting, sliding and attacks from bits of wood thrown up off the track, I decided to slow down! 20kph felt like 40 on a good road. The jolting wasn’t doing my shoulder arthritis any good either, so 10kph it was.

Colin was much more sensible and took it at a reasonable pace. Even so he lost a bolt holding on the rear mudguard and a pair of glasses. Both vibrated off the bike an some point. Luckily he had a spare nut, bolt and spanner for the mudguard but just couldn’t make himself turn back to look for the glasses.

Near the end we passed by the clay pits and found out this is a popular swimming spot for locals. Watch out for Tiger Snakes?

A bit tired and sore, we loaded the bikes up and took off back to Longford. On the drive back I thought about the two sides of the ride. A really enjoyable time going up the hill but not so much coming back down. I think it will be a while before we try the Rail Trail again – maybe with a pedal-assist mountain bike? No – not a direction I want to go !! A trike with suspension – now that’s a different story but needs a lottery win to fund !!

And now – the Video

And just a note to Simon – this is the bit you missed !!

Plus the video from my recent ride to Ross. At the end I trap my finger in the closing Selfie Stick – Rude Words said !