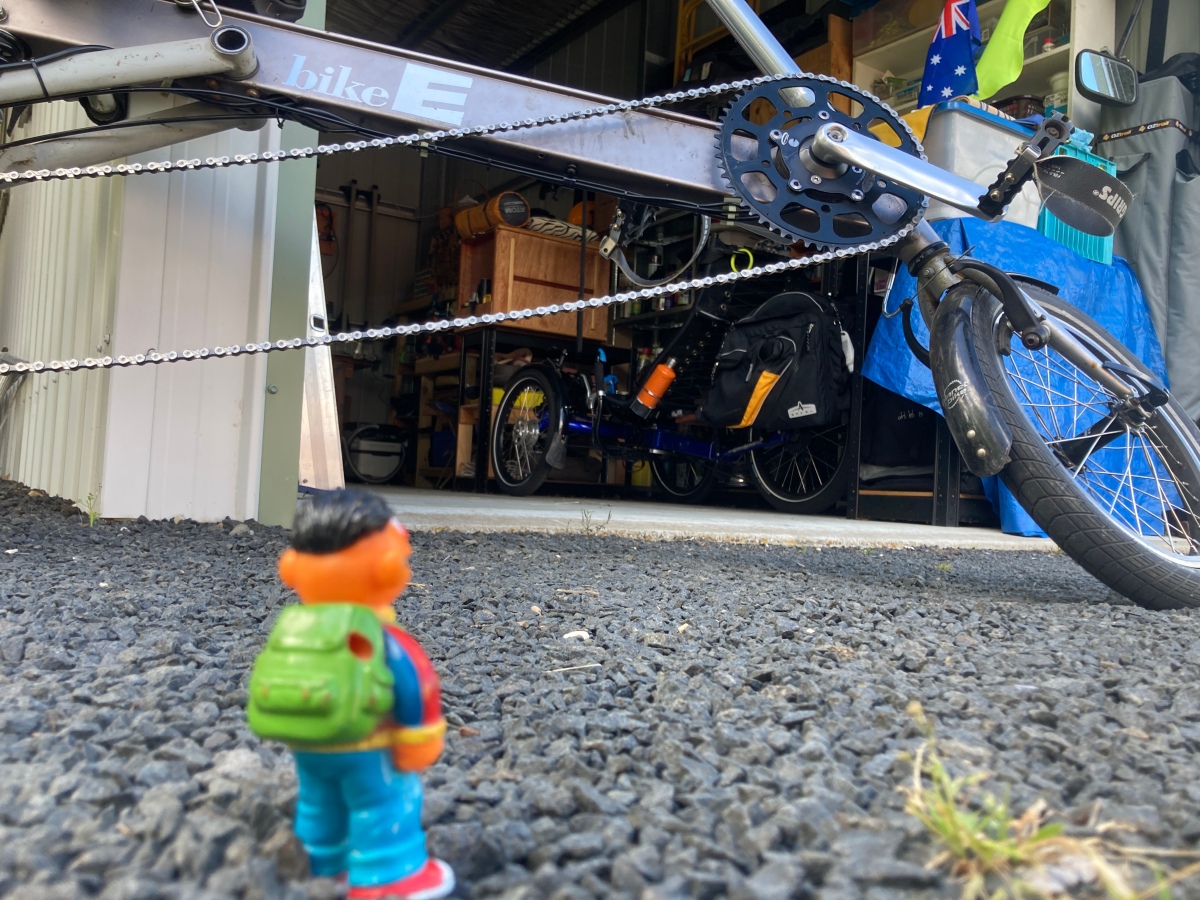 And now for something completely different ………..

A small visitor arrived from across Bass Strait yesterday. Ernie from Sesame Street had wrapped himself up in a parcel and arranged postage to Longford – with a little help from Emily.

I think he’s OK. A bit hard to vaccinate I guess but he has a pass on that. He quarantined back in Albury at Emily’s place before climbing in the envelope so, even though he snuck in before we have opened our borders to double vaccinated Victorians let alone characters from the USA, I think all is OK.

Ernie’s job is that of “Mascot”. He was lured here when he heard I had called Bike E, “Ernie”.

Sorry Ernie, today is a day for a ride. Reason – the sun is out and the wind has dropped.

We set off. I decided to introduce Ernie to local riding by taking the road down past Panshanger and along Powranna Road. One of the problems with living in an area without too many people and with lots of farmland is that sometimes a loop ride has to include a Highway. This ride would.

I showed Ernie the Macquarie River first. I was a bit nervous of how he would take things so made a basic photographical mistake!

We turned left along Powranna Road. After a while the sound of hot, revving engines permeated the atmosphere.

It smelt. Burnt rubber. That could only mean – the Powranna Dragway was in session.

Once through the smoke and back into clean air, we continued up to the junction with the Midland Highway

Emily is always careful to take her “guys” along dirt roads wherever possible to avoid scaring them with busy traffic. Sorry Ernie, we have to do this. Ernie hid out in the pannier while we negotiated 8 kilometers of highway up to the Longford turnoff. It wasn’t a bad run. Traffic was light and nearly everyone moved over as much as they could. Only one guy hooted and then gave the finger. A strange thing as we were well over to the left of the hard shoulder and in no way interfered with his progress. Must just hate cyclists or Sesame Street characters or both.

After the Longford turnoff it was the usual rural road potter back to Longford with a surprise 48 kph run down the hill to the Woolmer’s bridge.

The Ride with GPS stats show an average speed of 24.5 kph. I don’t believe that. The app did seem to drop out at one point so I reckon it got confused when catching up with where I was.

It looks like Ernie is happy to become Bike E’s mascot (thanks for the idea Emily).

7 thoughts on “An Overseas Visitor”