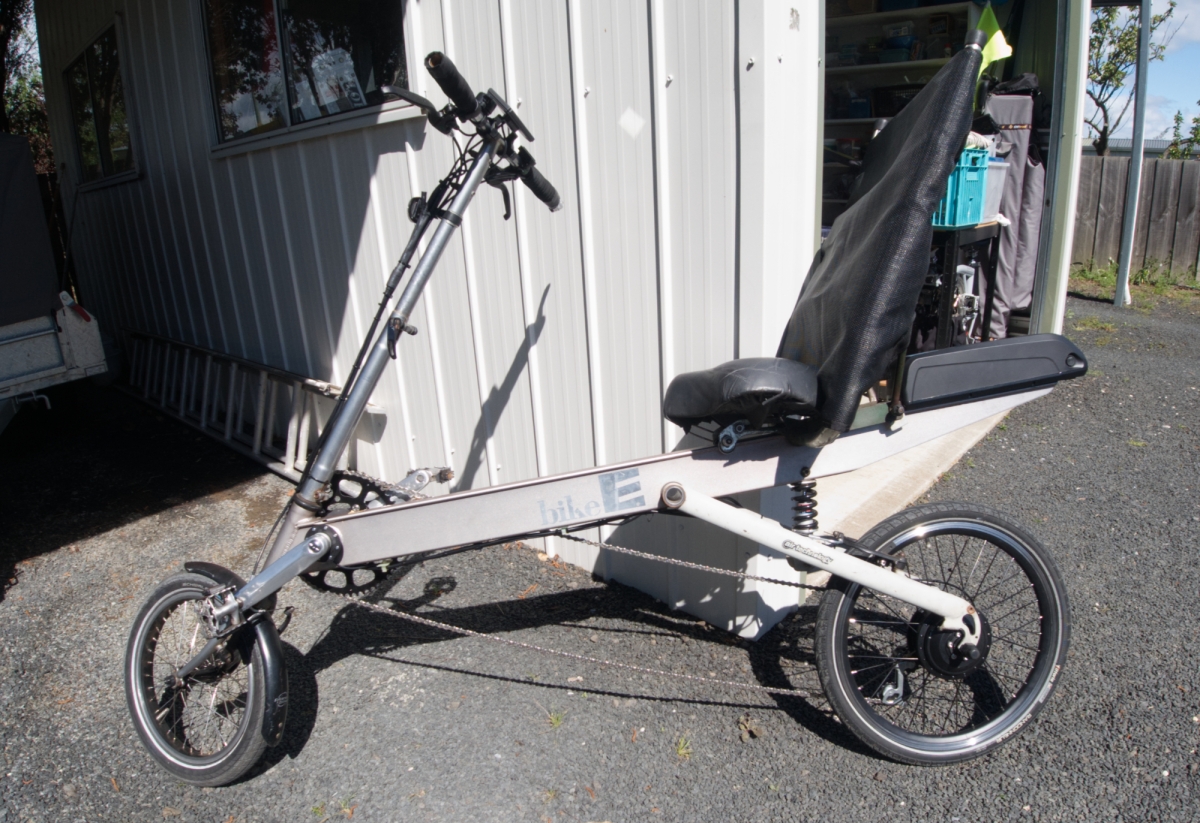 I agreed with Phil that I would pick up Bike E. He is not well but the main work of fitting the Mountain Drive and electric wiring were done; it just needs gears, brakes and so on sorting out – which I can do.

Phil was busy until 2pm so I took a slow drive down the Midlands Highway stopping in Campbell Town along the way. Why slow – as in have some stops along the way – I have a side strain which has enjoyed catching me out with spasms over the past week, so I was taking it easy.

There is a pleasant walk by the Elizabeth River and I took the bridge across to the “Free Camp” area just out of town. Here caravaners and motorhomers are allowed to stay but tent campers are NOT. The theme is “Leave no Trace” and it would seem tent campers do leave traces. We cannot trike camp here.

There are also several old trees which were left in place and made into an art gallery. They looked good in the morning sun.

Then it was onward to an early lunch in the Bakery at Oatlands. I added a drive around Lake Dulverton – a lake Colin and I cycled around a couple of summers ago. After all the recent rains the water levels are high in the lake and we would not be able to cycle out to the “islands” at the moment.

It was a lovely day as I headed down Mud Walls Road towards Colebrook. I was listening to the radio and all was sounding normal as I got to Sorell and fuelled up – surprised at recent petrol price increases! Then Phil called.

The word was out – the State Premier would be holding a Press Conference at 2.30pm shutting the south of the State down at 6pm tonight due to covid entering the State. A pesky guy positive with covid had somehow travelled from Sydney, thru Melbourne to Hobart. There, thought to be isolating at home, he was checked and found to be “Not At Home”. He was located and placed into Hotel quarantine. The mates he had gone to visit were also placed into isolation. All good.

Except the bastard then absconded from his quarantine hotel and went shopping, visiting and (it is rumoured) to enjoy a Bong. A pissed-off Premier reported “he is not cooperating”.

I once saw an ancient Chinese painting that was of a King doling out punishments – one of which was a sort of mini-stocks; a board locked around the neck, wide enough to prevent the hands reaching the face. Once a quarantine abscondee is caught they should be placed in the hotel room and one of these fitted – sized so they can’t get through the door. Cheaper than electronic tags!

Anyway, 178 close contacts had been located and isolated but a 3 day lockdown was about to the called for southern Tasmania. The news was already out hence the crowds in Sorell. They were busy emptying the supermarkets of toilet paper; again. What is it with toilet paper?

Hurrying now, Phil made it back, we did some essential work to Bike E (like get the power through to the motor!), then we loaded it in the trailer and I set off north. I had to get north of Tunbridge before 6pm to ensure I was out of the Southern Midlands municipality, the most northerly municipality that would lock down. I got there with an hour to spare, travelling up with a stream of fellow rats leaving the sinking ship SS Covid.

Surprisingly my side strain was much reduced the next day. I was surprised, especially as it was a non-stop drive back. Good, that meant Saturday was spent sorting out the brakes. They have always been difficult to set up but, this day, one pad on both the front and back just wanted to nestle up against the wheel rim. Eventually they worked. I could yank on the brake lever and both pads came in and then, most importantly, they both retracted. The gears changed nicely. I am using a bar end lever as they work with arthritic hands. Our Friday troubles with power to motor were to do with the pedalec sensor recognising the cranks turning. A judicious whack with a hammer remodelled it then – and it is still working!

By the end of Saturday the bike was going OK.

A ride to Panshanger

On Sunday, E Bike E and I headed off for a test ride. A trip down to Panshanger would be a quiet country ride – just right for running things in.

After recent rains the river levels are up again.

The white dot is the top of the post to which boats can be tied in normal conditions.

I can’t use the old backpack attached to the back of the seat as it would be bashing on the battery.

There is a bit to be worked out as yet!

There is a climb up from the river and it would be interesting too see how the hub motor gets on. I geared down and hit level 2. Up we went. No strain at all. I tried level 3 (of 5) and we sped up nicely.

So, how’s it all going? Well, I can’t get top gear. It appears the derailleur is working to its full extent and probably needs a spacer to get that small amount of movement to allow top gear. Riding in 8th was OK – comfortably cruising in power level 1 / 2 at an indicated 25kph. For riding such as this only the top range of the Mountain Drive is needed. A good thing as, when used in the lower range, the extra torque is spinning the drive a little in the bottom bracket – the large BB holding nut needs to be even tighter that Phil and I spannered it. A job for next week.

To get the motor in we had to cut the bike stand mounting point off the frame. This means no stand for now. I am investigating using a telescopic wading rod as a “click stand”. I have one kindly given to me by Cher. It works well as a wading rod and I hope it can dual purpose as a bike stand too.

I enjoyed watching a few of the planes performing acrobatics over the paddocks.

Then is was time to head home. The hub motor is a fair bit noisier than the mid-drive on the trike and it uses it’s power differently. This will take a bit of getting used to. It doesn’t appear to be noticeably “thirstier”, with 38 volts still showing after 30 kilometers after not being too economical with power.

On the way back I passed the cyclists in the race. I turned the power off while they passed to avoid calls of “cheat”.

On Monday I took a ride out to Bishopsbourne to test performance up the 4 hills of Wilmore’s Lane. All good – we went up those hills faster than the trike does!

On return we had covered 60 kilometers on the single battery charge. The volts are getting low now but I reckon the bike will still go another ….. hmmmm .. 20 kilometers if ridden carefully. Next weekend is the annual Gunns Plains ride which is quite hilly. I reckon a single battery should suffice.

OK. That’s it for now except to express my thanks to Ken for giving me Bike E and Phil for his work to electrify it. Thanks Both.