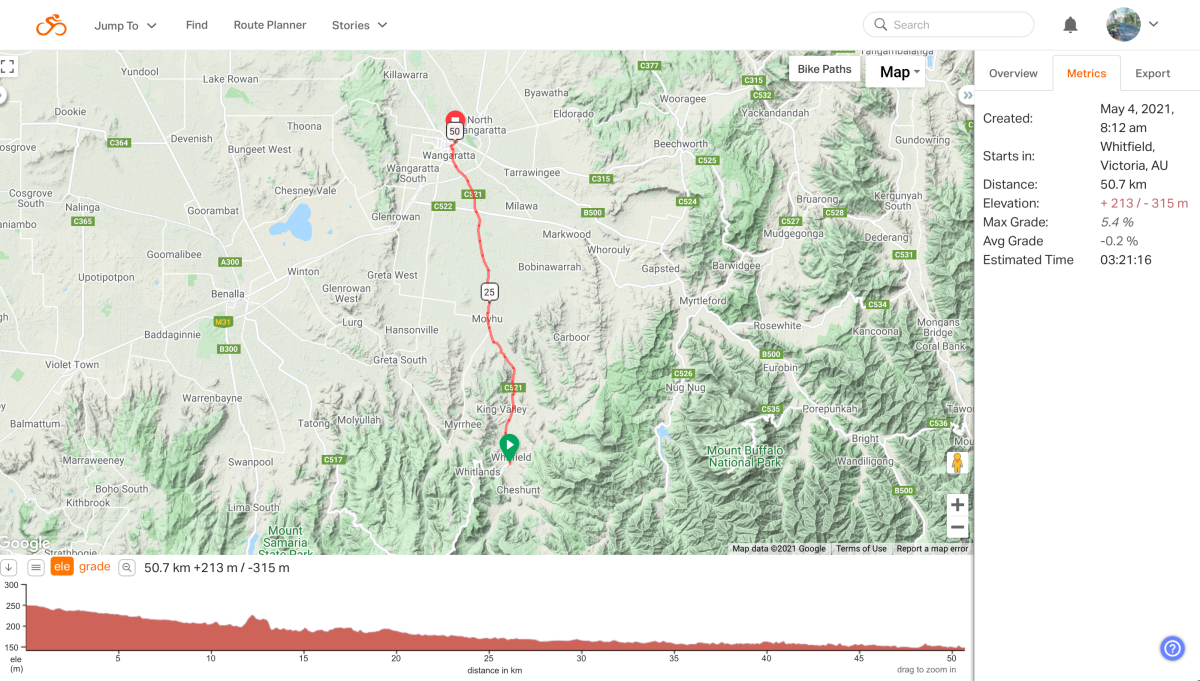 Look at that elevation graph – some days you are just meant to be out on a bicycle.

The morning was cloud free and quite windy. I packed up and was off by 9am – not that early! Before a coffee at The Whitty Cafe I asked a fellow camper which way to Wangaratta and he pointed down the road I thought I should take. There were no directional signs in town! I thought it probably was down there so I hoped we were right. (perhaps a map would be a good idea?).

I sat outside the cafe to enjoy the coffee in the sunshine. Returning my latte glass to the counter, I was soundly told off – leave it on the table. Can’t you read!

On getting going, the wind was pretty much a tailwind, the incline was flat and the first 10 ks rolled by very quickly. Then I saw a sign – I was going the right way! The second 10k, and then third rolled by and, basically, the first 40 kilometers zipped along effortlessly. How terrific after the 5kph plod up the hill yesterday.

I stopped at Muddy Creek for a coffee (which was OK) and was tempted by the largest sausage roll I have seen in a long time. Even after that intake of grease the road shifted quickly under the wheels as the wind blew the bike and me along.

Traffic was very light for the first 20k and then gradually got busier. The road surface was that wonderfully smooth Victorian chip seal and this extended to the hard shoulder – when it existed.

The area the road passes through is the King River Valley and the availability of water obviously supports a variety of farming. One popular commodity is the grape with a number of wineries gracing the roadside.

At Oxley, about 12ks from Wangaratta, I noticed a cycle/walking track to the left of the road. No other signs or fuss.

Thought I would try it and initially it was surfaced in slippery round gravel which improved a little after a few meters. Then it improved again and started to look like a track covered in pebbledash; tough, smoothish and really rather good. With the wind remaining behind me the next 10 ks were knocked off easily. I will have to look into this as the track would seem to be a rail trail.

The last two ks were more difficult as the trail petered out into suburbia through lack of signs or, more probably, I missed one.

Anyway I was dumped in the middle of Wangaratta stuffing about seeking signs to the city centre.

Initially I didn’t recognise Wangaratta but finally worked out where I was. All was OK and I am camped in the caravan park on the Ovens River flood plain just over the river from the cafe precinct. It is accessible by footbridge!

Lotsa of coffee there!