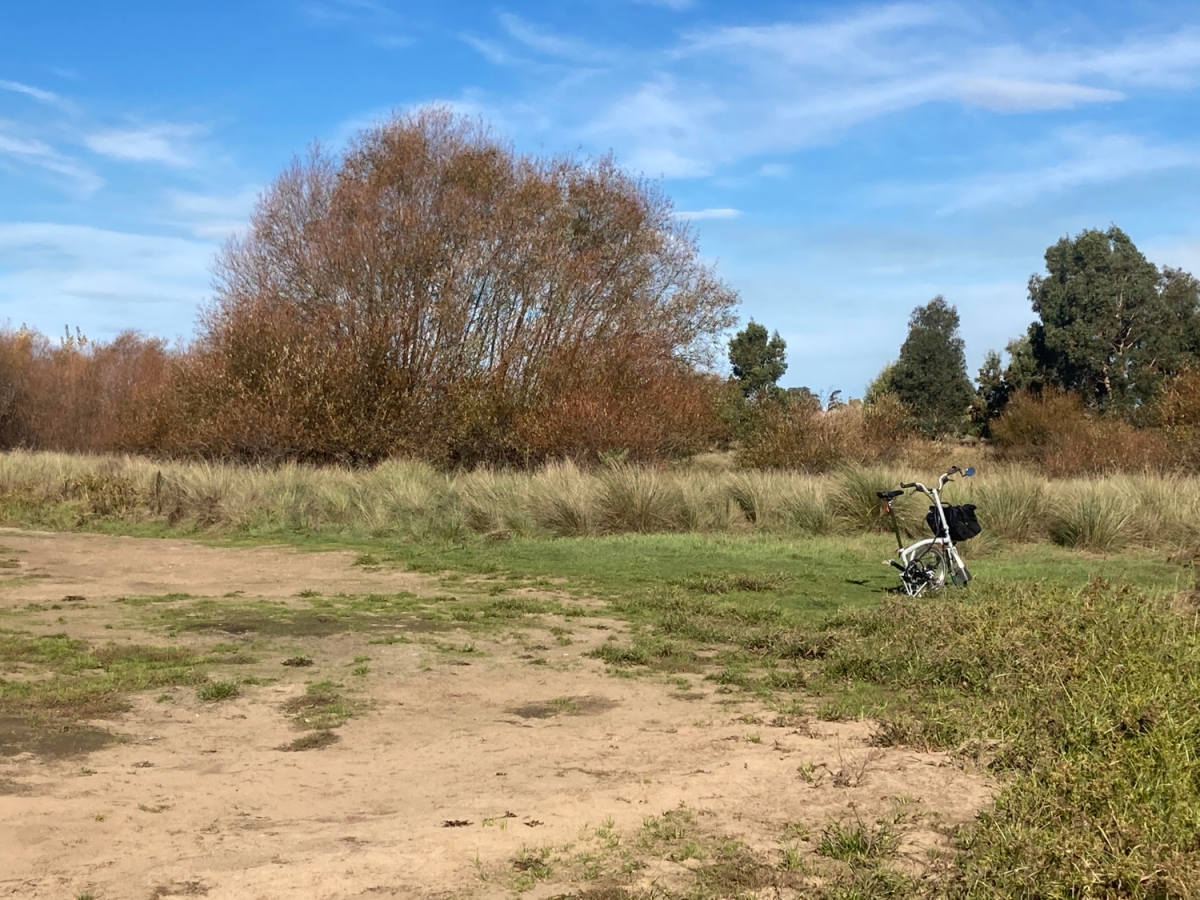 What a silly idea! Riding every day for a month. Why did I sign up for it? Well, I suppose because I enjoy the challenges of cycling!

April is a month of change. First we had a brilliant week and riding every day was a good thing to do. Then, for week 2, we had a windy, cloudy, cooling shit of a week which made things harder. For week 3 we begin with nights cooling to 3°C and max. daytime temps somewhere just above 15° but with a strong chill factor from the continuing wind.

On with the cycling :

Eventually I got astride Bike E and took a short ride around Longford. For something to do I rode past a number of building sites to see how the house building is coming on. Longford, along with nearby Perth, is having a bit of a housing boom and the Main Street is filling up with a growing parade of vehicles; new cars, tradie Utes, concrete trucks, log trucks, building supply trucks and all the other stuff passing through.

The interesting thing about keeping an eye on development is how often a new house is built to one of the contract stages where payment is made and then there are no workers to be seen for a while. We haven’t enough builders to keep pace it seems, so everyone gets a turn at getting a stage completed.

It was 3°C overnight and we woke to a totally blue sky, sun and no wind. The weather report shows a heap of rain heading our way during the next week. I didn’t ride in the morning though as I had promised myself one of those synthetic down jackets said to be really warm in the dry or in the wet. Sounds ideal for Tassie and great for under the yellow “shell” I ride in. I found one in Launceston.

So riding was relegated to the afternoon. Just a quick ride to the Longford bottle shop via the boat ramp. No platypus seen today.

One other cycling thing I did today was to bite the bullet and finally order a set of Arkel RT-60 panniers plus rain covers. I have been dithering over this for a while after the Vaude panniers self destructed on the Beauty Point trip but the “buy-now” switch in the brain fired today. Postal services in the Oz have been scrambled by Covid so it may be some time until the panniers arrive from Queensland but they should start out on Monday.

Then it was home for an OzPig evening sausage sizzle:

The link to cycling is – the found wood. Over summer people go and cut firewood and then take it home in trailers and Utes. Sometimes a log will drop out onto the road where I find it and bring it home in a pannier.

At last it was 0° overnight for the first time since late Spring. It left a tracery of ice on the birdbath this morning. Soon melted when the sun rose and we began another blue sky, sunny, calm Autumn day.

Such days are to be enjoyed so we took off in the car for a drive up to Beauty Point. On the way we had a walk by the kanamaluka/Tamar River, a coffee in Gravelley Beach which was followed by a walk up the Supply River. Then it was time for lunch in the River Cafe. By then the clouds had begun to roll in.

It was a very short 1 kilometre ride on our return – to the shop for 4 litres of milk so we can have coffee tomorrow morning.

About time for a slightly longer ride. I am well up with my annual challenge having already ridden 100+k this week but a little more never hurts.

I decided to ride by the river then head up to Tannery Road. Going along there I can then cross the Illawarra Road and get onto Bishopsbourne Road keeping myself away from the speeding traffic.

Colin and I did this ride a couple of years ago when I was riding Red Magnum and Colin was on the Atomic Zombie Warrior trike he had built. We had a bit of difficulty!

Today I was on the Brompton so the level of difficulty was lessened.

The rain caused high river levels recently but not high enough to trouble the town. The rubbish flowing downstream with the minor flood levels can also be seen hanging off the fence line – that’s not a hedge!

The gravel surface down to the Mill Dam was OK, nothing to trouble an experienced Brompton rider. The bit after the Dam up to Tannery Road was a bit more tricky. This section floods and quite a lot of lightweight sandy gravel had washed into and across the road causing Brompton wheels to drift about a bit.

Then we crossed this cattle grid. It is very deep and the rails feel just wide enough to support the toes and heels; it’s not comfortable to even walk over.

Down Tannery Road and I found out why no vehicles had passed by – the boom gate halfway along the road (that we had to go under in the video) is closed. Today it was easy to lift Brompton over.

Crossing Illawarra Road was not to hard. A fair amount of high speed traffic dashed past but it’s just a matter of waiting. Patience gives safe access to Bishopsbourne Road and scenes like this.

Along Bishopsbourne Road the winds made themselves known. They always do. Today they were coming in from the west – at about 3 o’clock. With a lot of hedge protection and the wind tending from 3 to 4 o’clock it was a good ride up this continual but low % gradient.

Turning onto Wilmore’s Lane the wind then became a full-on tailwind. Smashing!!

We have watched the progress of house demolition, land flattening and rubbish removal to turn it into this.

Now the pivot irrigator which can just be seen by following the arrow can irrigate a much larger paddock. I think it will be to grow grass as this property seems to focus on raising sheep.

From here it was a tailwind assist back to Longford with the only excitement being a Tiger Snake in the middle of the road on the final descent. Catching a few rays before things get too cold? The final kilometre was heading straight into the wind. A typical Longford loop ride.

A bog standard Bishopsbourne and back. Today everyone seemed to be in a hurry so cars and Utes blasted past in either direction without lifting the foot at all. Lots of room given though so no problems. One low Mazda sportscar (MX5?) coming the other way (dark colour, cloudy, poor light) with no lights on was cutting the corners so, when I was spotted in the corner, evasive action from the driver was needed. Targa Tasmania began today and the Mazda, followed a bit later by a beautifully renovated FJ Holden, made me think I was riding today’s course. I wasn’t it turned out.

Weather : 15°C, very blustery ahead of a front due this evening, cloudy.

What a nasty day. Rain and more rain showing on the Radar. Colin and I cancelled our proposed Armstrong Lane ride so Sue and I visited Launceston in the morning and during the afternoon I waited for a suitable gap in the wetness.

It came about 2.30pm, so I headed off on a short ride to the Library to pick up the 3rd book in Peter May’s China series. They are an interesting read as Peter includes explanations of the way Chinese social customs work and the speed at which change is occurring. He also writes a mean mystery novel.

The day began with deeply frozen birdbaths! -2°C overnight. Quite different to those warm nights at the beginning of April.

Time to look out some cool weather riding gear :

I needed a haircut and, later in the day, to go for my annual flu shot. So I rode Bluey to both, started Ride with GPS as I left home for the haircut and turned it off when I got back from the flu shot. In between I went home for lunch.

The April weeks at a view :

I have been watching the YouTube channel of a woman in Serbia riding also 30 days in a month. Her month was March and she added a feature. On Day 1 she rode 1 kilometre, Day 2, 2 kilometres and so on. I am glad I am not doing that else this coming week I would be starting at 22 kilometers building to 28 for the last day – that would be 175 kilometres for the week!