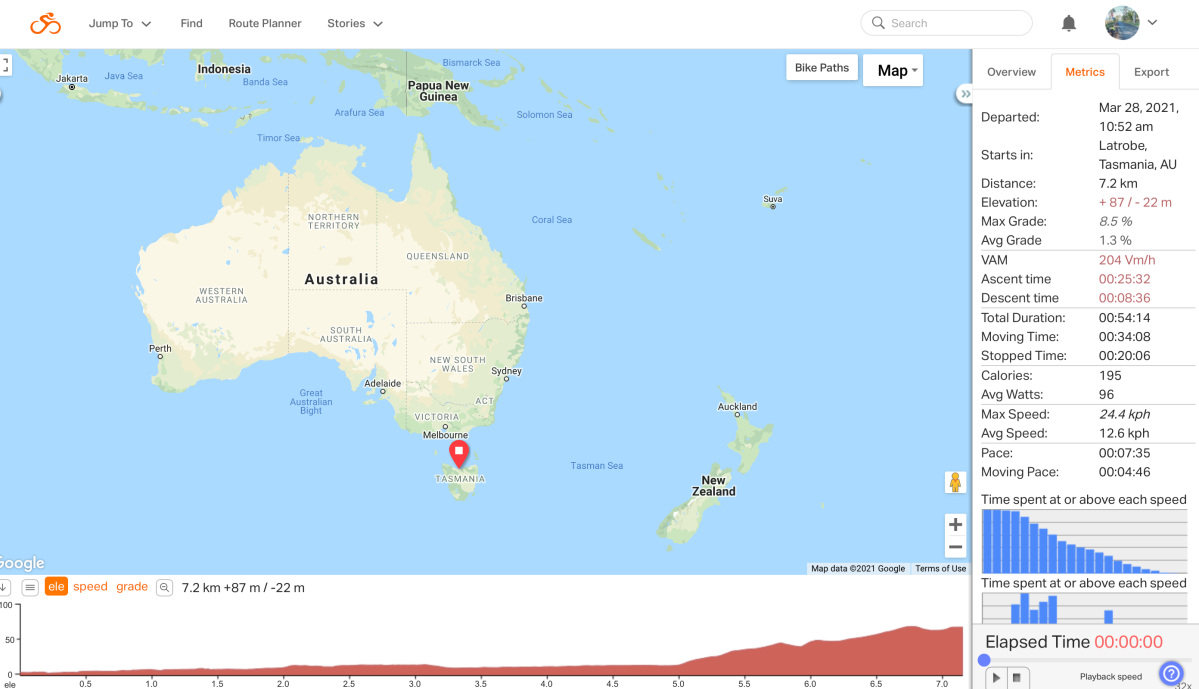 Before the details I thought I will just show you where this week’s ride fits in to the geography of the world.

As the title suggests, there has been only a little riding this week. Not helped by spending time hunting for a new (used) car or by the weather being wet whenever I had time spare.

A great band of wet weather ran right across Australia this week bringing serious flood conditions to the main island, both the inland and the east coast areas. The band of cloud (called a trough?) ran from the Top End through to just below Tassie and presented the east coast of Tassie with copious quantities of the wet stuff.

Here at Longford we had a couple of wet days and one very wet day but no flooding to speak of. Weren’t we lucky?

The morning before the rain began, Colin and I rode a short 15k loop out of Longford heading for the coffee shop. It was a nice morning but we knew conditions would deteriorate before too long. They did.

Sue and I made use of the wet days car hunting. We were after a small hatch capable of towing the trailer – a replacement for our ageing X-Trail. It was a bit sad really because that vehicle towed our caravan on a “half-loop” of Australia a few years back. Melbourne, Adelaide, Alice Springs, Katherine, Darwin, Cairns and back via Bourke. Cleaning the X-Trail for trade-in, I was still finding red dust from that adventure.

6 months ago we started thinking about a car change and decided we would go for a Subaru Impreza. Since then there has been a COVID effect. They tell me it has got hard to get new cars into the country so secondhand cars have become much in demand. We all know what that means – rising prices. We can no longer afford the Impreza unless it is 6-7 years old with 150,000+ ks on the clock.

So now we have begun bonding with a 3 year old Kia. Crikey but the seats are low! Will we be able to get out of it in 5 years time?

Anyway, job done. I can now focus on riding!

The second ride for the week was held at Latrobe. No tow bar on the Kia as yet so I had to take Brompton. It – and the bag plus riding gear – only just fitted in the boot.

Why Latrobe? Well, the NW Bicycle Network group is holding a ride here today; a ride which will include a section of the Tasmanian Trail. The TT runs from Squeaking Point in the north down to Cockle Creek in the south. It’s is a horse riding, walking and MTB cycling trail.

The first person I met at the Latrobe meeting point, The Axeman’s Hall of Fame on Bell’s Parade, was Patrick – who recently finished riding the entire Tasmanian Trail. 11 days his ride took. Approx 50k a day but the terrain was not flat. Not flat at all.

It was expected that 5-6 people would meet for this Sunday ride but the numbers kept increasing as it neared the start time of 11.00am. I reckon the electric bikes probably outnumbered the non-electric at the end. They are getting really popular.

by 11.00am Sue was up in Latrobe. She had come along with me, heading for the shoe shops. We would meet later and have lunch somewhere as I was not going to do the whole ride today. The plan was to ride 10ks out, turn around and ride 10ks back. I did not intend to ride the predicted rough gravel section on Brompton.

Eventually us riders set off up Teddy Sheean’s walk. How it happened I don’t know but, as we hit the walk, I was in the lead! The walk is a path leading into Latrobe proper and it crosses a number of roads. At each junction the walk has a set of bars across it to stop motorised traffic entering. I got off and pushed the bike through and then watched in admiration as the next two guys rode around the obstructions. Such bike control! Gradually I worked my way to the back of the group.

I rode out of Latrobe on the first tarmac section with Neville. We had a good chat and he was going well on his home built electric bike – that he had already ridden in to Latrobe from Moriaty. Neville is a great example of how one can be fit and enthusiastic at 90.

We eventually split up as the traffic pushed past on the narrow road. I tucked in behind some riders, soon realising I was behind Neville’s Granddaughter and her boy friend. That’s great, a cycling family.

I kept up with them over the first few gravel hills on the Old Deloraine Road but eventually I was dropped. Kicking into Mountain Drive, I then cranked up the next few hills at a more comfortable (for Brompton and me) climbing speed – 7 kph!

At the top of one hill I could see the group waiting around having got through a boom gate. This was where our route went onto the Tasmanian Trail. I took a look. The last few metres down to the gate were a bit hard on Brompton with great ruts and washed out areas covered in exciting gravel. I would turn back here.

The run back into Latrobe was good but why does the wind seem to be in the face on the way out and then again on the way back?

Latrobe had got busier while we were away cycling. It is a small town but has several second-hand sales businesses, unusual shops and a market open on a Sunday – all of which are enjoyed by Sunday shoppers. I was able to ride down the footpath towards Bell’s Parade as I was riding away from the shopping area and, even though the road was busy, pedestrian traffic was light.

I arrived back at the car and called Sue. She had had a good shoe shop plus enjoyed a coffee and was walking back to the car. While she was on her way back I decided to check out the new River Road shared pathway heading to Devonport. Yes, it’s now been completed and, at this end, joins up with the paths at Bell’s Parade.

Yes, there is a sudden drop! Best not to cycle over that red line.

The engineers building this track have take this end and built it further away from the roadway when compared to the Devonport end. It flows around corners through native bush. It also goes up and down like a roller coaster so .. it’s interesting to ride. Quite a few others thought that too and were out there with their kids all having a ball, mixing it with dog walkers and a few people striding out. Very good to see it being used so well – look pollies – give us shared paths and we will use them. I know there are arguments about the Wynyard end but there are now several sections of the proposed Wynyard to Latrobe shared path in place. Come on Councils – it’s now time to start joining them up – deal with the harder bits.

Having had a taste of the trail I returned to the car. I had enjoyed the day while Sue had found a good pair of winter shoes. A satisfactory day all round.

2 thoughts on “A Light Week”