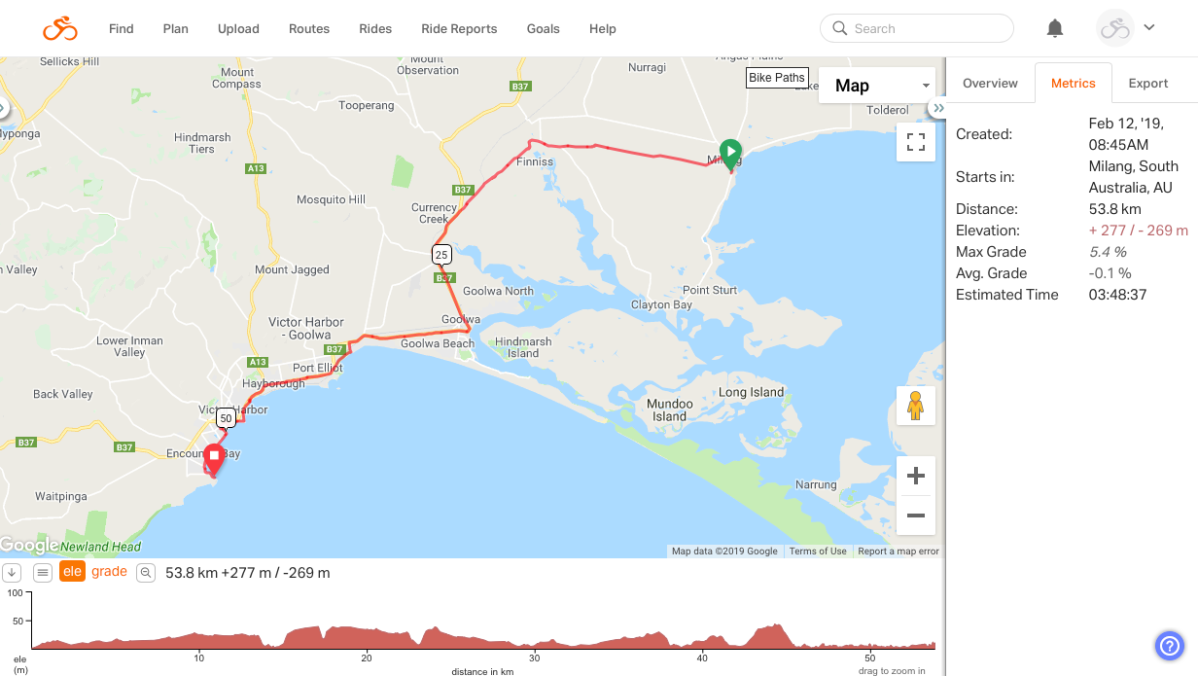 This has now turned into a 2 day ride. My legs felt hollow today whenever a climb was reached – so I stopped at Goolwa.

It was cold this morning and packing was hastily completed with numb fingers. The bags don’t sit right on the back of the trike as inside them things are just poked in. 7.30 start; the best on trip. I am waiting to find out what didn’t get packed in the rush!

One thing I hope I have left behind is the nuisance couple in their 40s acting like 16 year olds while using their caravan’s outdoor speakers to listen to a radio station playing “classic” hits of yesteryear. All afternoon and all evening. Not too loud but really, really boring. I’ve heard most of them all too many times before. When they finally went indoors and turned on the TV, we found their outside lights were on a motion sensor – and it sensed motion all bloody night! That and my shoulder playing up meant little sleep.

So, an early morning ride to Clayton’s Bay. I arrived half an hour before the coffee shop opened. Carry on or wait? WAIT…

Coffee drunk I started towards Currency Creek and more vineyard country. Initially flat, things got a bit hilly when taking a “short cut”. That’s when the legs said ” Hey. Cut this out”.

Along the short cut a bit, the road went down to a creek crossing. There the vegetation was green and the old trees showed where Aborigines have removed part of the bark for canoe making. This was some time ago as the scar is well integrated with the tree.

I decided to head for Goolwa, stay there two nights and ride to Victor Harbour tomorrow with no gear on the back. Actually getting two nights accommodation in Goolwa turned out to be hard. Tomorrow is the start of school holidays and the place is booked out. In the end I have a cabin tonight and a tent site for tomorrow. Then I ride back to Milang to stay with cousin Steven and his family.

After checking in, a visit to the Information office was needed. I thought there was a rail trail between Goolwa and V Harbour. Turns out it is not a rail trail but a shared path made up of quiet coastal roads linked by off road stages. Great. That’s my route for tomorrow.

The whole way through this area I have been seeing Pelicans and art works depicting Pelicans.

The movie Storm Boy was shot around here and in Goolwa there are lists stating at which place various scenes were photographed. It didn’t mean much to me though as I have never seen the movie.

So, I will rest up now and hope a light ride tomorrow will get me to the place where the trip starts to head north to Adelaide. Without stuffing up the legs even more.

Sue is at Skipton also feeling tired after not much sleep on the Ferry – even though she had a cabin!

2 thoughts on “Milang to Victor Habour”