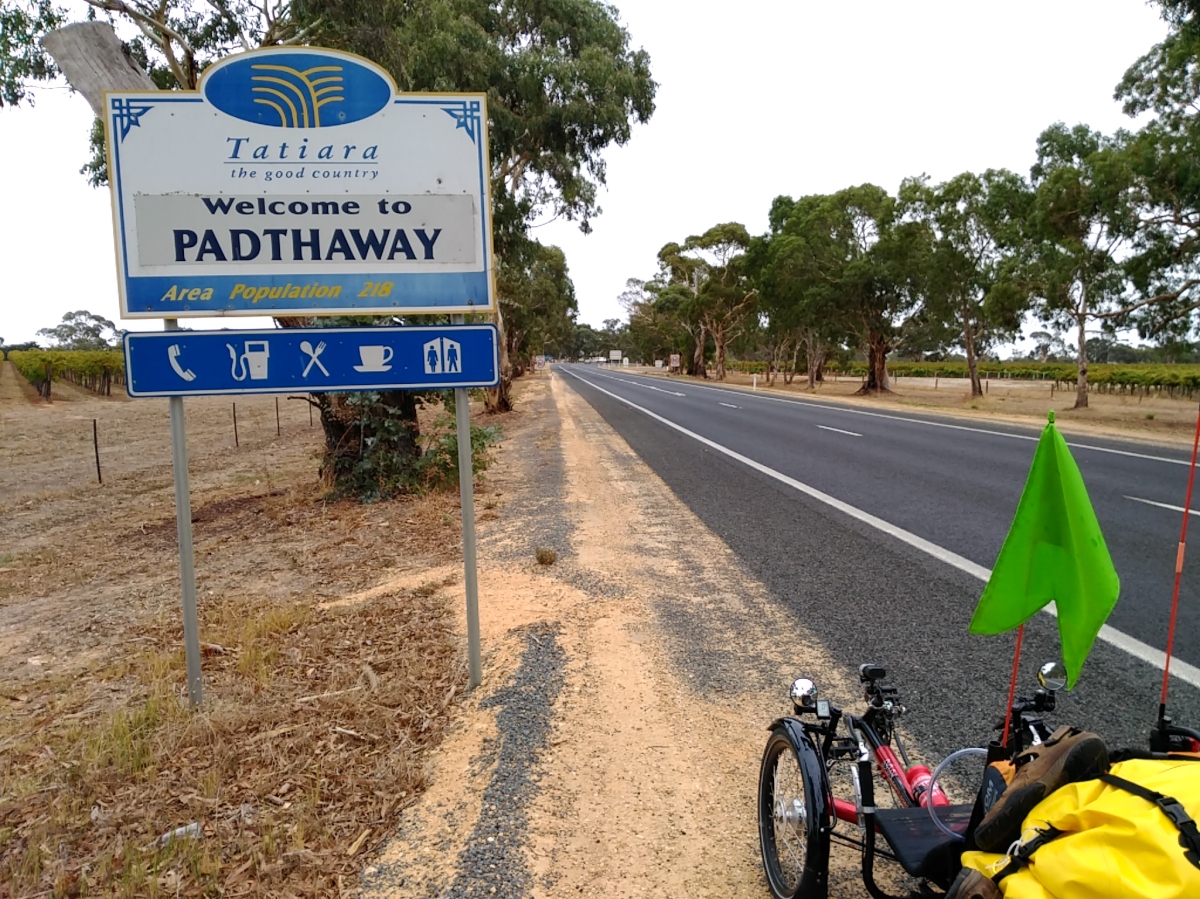 Another day of gentle inclines and declines. Ride with GPS reckons I climbed 400 or so meters. That’s highly unlikely.

Today dawned cloudy and so it was quite warm at 12C as things were packed onto Maggie.

The footpath to town that I used last night had some tight corners, so this morning we went by road. To the Bakery for an eggs and bacon breakfast. Somehow that was the right thing to do.

I checked the way to route 66 and immediately turned the wrong way. Eventually realised, backtracked and got going.

Yesterday, on the way into town, I checked the tyre pressures for the first time since Geelong. They were down 10psi all round. Now they are at the optimum pressure for speed and comfort. Will it make a noticeable difference?

Check out the guide posts. They have been flattened before and after where I parked. Reminds me of a truck driver in the Huon who’s favourite thing was to twitch the wheel to send the trailer left to collect guide posts. He could take out Maggie easily.

Entering the Padthaway district the vineyards began again. Brown Brothers, Penfolds, Orlando, Seppelt and Lindeman spotted. Also several unknown to me – including Treasury wines. Now, does the Government run it’s own vineyard for work dos at the Treasury?

A point. Although I haven’t seen a lot of these wine businesses most were established in the late 1800s so I guess we just don’t see them in Tassie.

By now I had had time to evaluate the updated tyre pressures. I can’t say there is a great difference. As yesterday, the biggest speed boost is to travel on the actual carriageway.

Passing one paddock full of grapes ready for picking, there were at least 3 shot firing devices firing at irregular intervals. It was a bit like being in a military training exercise.

Just as I took the above picture a 1960’s EH Holden passed – with SI (special interest) plates that looked like they were Tasmanian.

On entering Padthaway I visited the General Store and the EH was parked outside. They were TAS plates and we had a chat. They are from Launceston headed to Perth, WA for an EH owners get together. They are glad they are doing their trip and not mine!

In the Store I asked about the vines being pulled out some 5ks back. Turns out they are Chardonnay and, as demand has fallen, a different type will be planted. Growing grapes sound like growing fruit in the Huon Valley. One market falls – pull stuff out and plant something else with fingers crossed.

I also asked about the windmills that are dotted around amid the grapes. I thought they were for irrigation but they are not windmills as we know them. They are fans- they stir up the air to stop frost. Like helicopters are used in New Zealand and, Sue tells me, in the Huon. I was told that another 70 fans are being installed locally and the fan man came in as confirmation.

Tonight I am staying at the Padthaway caravan park – in a cabin ‘cos it is wet again.