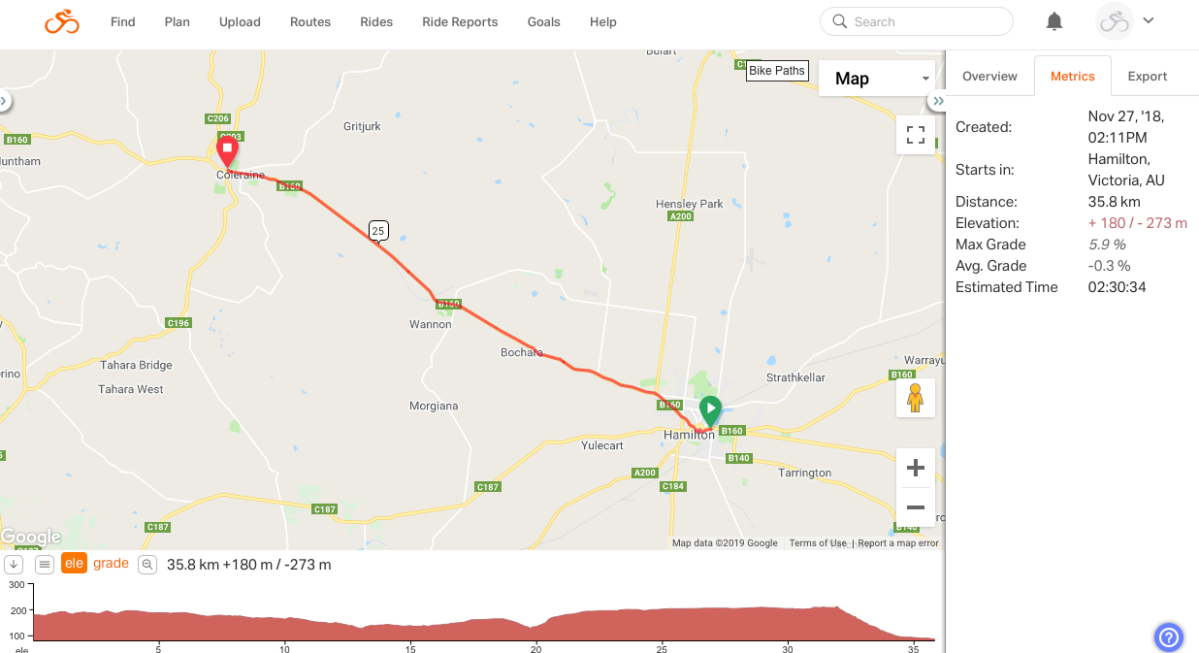 This was to be another short day but Coleraine’s caravan park left a lot to be desired so it ended up a 70k day.

Up early looking for a 8am start. It was cold so cycle clothing grew as I loaded up. Ended up with normal gear plus leggings plus fleece top plus waterproof (windproof) jacket and shorts plus gloves. And this lot stayed on all day!

Not far out of town I sat out a shower using a large pine tree as an umbrella.

The rain brought out the colours in the trees and when the sun actually came out the light / colours were interesting. But after an hour or two it became very important to watch the mirror. Not much of a hard shoulder and enough traffic to need a sudden trip into gravel or other crap by the roadside every now and again.

Half way to Coleraine this sign appeared. Now there was something else to look for. The system is, check ahead, something coming then check mirror. Anything behind then hit the dirt. Nothing in either direction then look up. Any Koalas? No, loopback to check ahead and repeat.

Coleraine’s arrived quite quickly and I checked out the caravan park. Oh dear, a couple of run down permanent vans with canvas annexes that had seen a better day 10 years age. Bass music blaring from one of the annexes. The instruction was to pay at the Post Office. It was 12.15 and the PO shut at 12.00. Thank goodness, I couldn’t stay.

I then checked the Coleraine Historical Society building. Shut. Looks like is hasn’t opened for yonks. I believe it has some info re the Chinese miners as they passed through here walking to Ballarat. If it’s in there, I can’t get it.

What to do? Bugger it, let’s carry on to Casterton and hope it’s a bit better.

Just after leaving Coleraine Mrs GPS told me to take a side road. When setting up the route I must have found a non-highway path. I turned as instructed.

The small road went through rolling hills and the farming changed to cattle. It must be calving time as I passed several small paddocks with mums and new born calves in them.

Then the hills got bigger. This first one was a bottom gear job but not too long.

The second, a bit further on, was longer and steeper. A slower bottom gear job.

The third was a terrible thing. Bottom gear for ages, up and around corners and still it climbed. At one point the odometer read 1.9kph for a fair stretch.

Eventually a crest was topped and a decent downhill began. What a relief. Down almost the entire way to Casterton.

Did you know that Casterton was where that wonderful dog the Kelpie came from ?

It was still showering and a cool wind blowing so I cruised the main street looking for a Motel. None. To the caravan park then where I had to put up the tent. The kind park manager has offered to bring me a spare blanket if I get cold.

2 thoughts on “Hamilton to Casterton.”