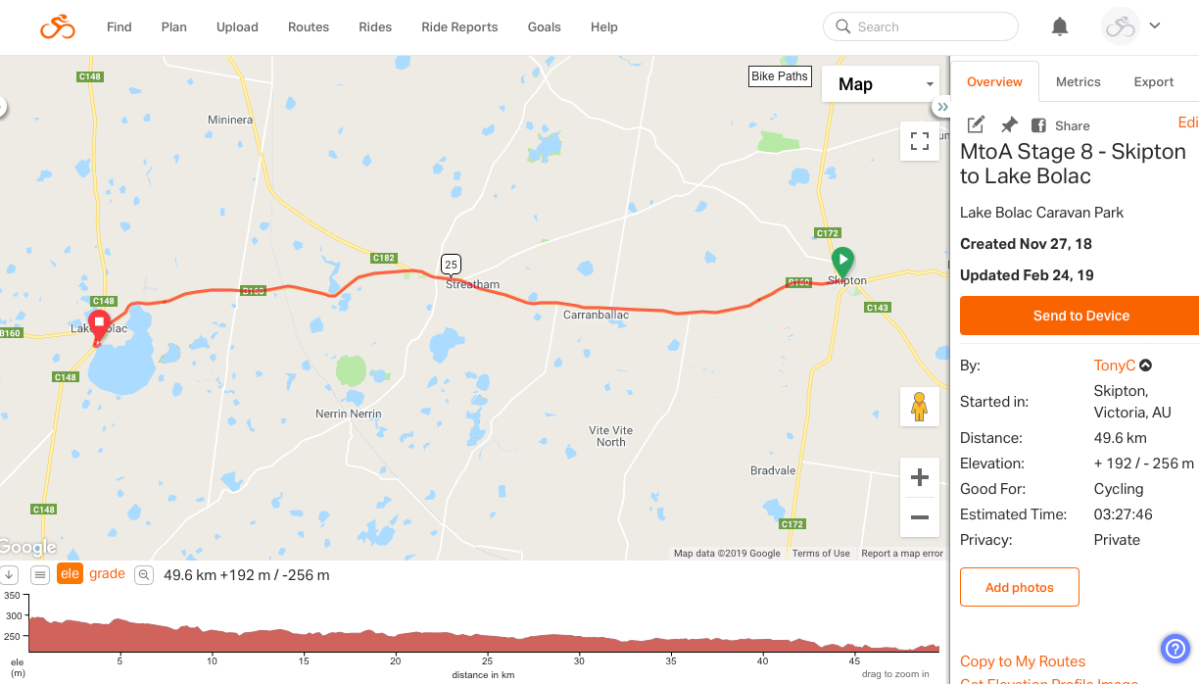 Sorry about the tone yesterday. It was pretty tiring to ride uphill against the wind – but that is all in the past!

Some time ago I did a T-BUG ride sponsored by St Luke’s Health fund. We received a sponsor bag each with bits and pieces in it. Today I used the sun screen and band aids. Sun screen because it didn’t hang around as a white blob. Band aid to protect the blistered ball on the left foot. All worked well. Thank you St Luke’s.

But first, a word about Skipton. The town was named after Skipton in Yorkshire, UK. It means “Sheep Town” in Anglo-Saxon. I read that the fine wool trade is an important part of the economy here. Oddly though I saw no sheep in the area.

Second. Skipton has dubbed itself as “The home of the Platypus”. Latrobe in Tasmania has done the same. Just how many ” Homes” have the platypus got?

Today dawned nicely. Small fluffy white clouds in a blue sky and no wind. I started off downhill for a little and then up a gentle incline climbable using the middle chainring. Up the next hill and at the top, a downhill section. Ah … riding as it should be unlike yesterday when over the crest meant being faced with the next part of the climb.

The band aid over the ball of foot blister fixed that problem. Overnight an issue with the tailbone area which appeared in the latter part of yesterday’s ride had fixed itself and the right knee damaged at Geelong was no worse, engine firing on all 4. The kilometers started to go past much quicker than yesterday.

This morning we passed through land that is used for wheat farming. All paddocks cropped and huge walls of straw bales can be seen. I wondered what they are used for as they are no good as fodder.

Halfway today is the “town” of Streatham. Nothing like the south London town I knew. It has a General Store though and I was rather hoping for a halfway hamburger. The store appeared and the fence around it was filled with advertising. It looked the business even if most of the advertising was quite faded. The proprietor does not cook food fresh for customers. Only warmed stuff is on sale and not much choice there either. I selected a pie and some spring rolls that looked like they may have been fresh this morning and hoped for the best. My dreams of a freshly made hamburger with the lot were dashed.

For the second part of the ride the wind became a force again. I was travelling west and it was blowing from the north west. Often it seemed to come directly from the north so it was very much a side wind. End result was only the occasional ‘drag you down 3 gears’ effect.

“What was Lake Bolac like” I wondered. The plan was for a rest day here but would it be OK. As we rolled into town I rode past two coffee shops and a supermarket. That looked good. Along by the lakeside the caravan park looked fine and, on a whim, I asked if there was cabin available. There was and I booked it for 2 nights.

This evening the wind rose again and the TV news informed us that tomorrow will be very windy as the back end of a northern cyclone passes through. Good thing I won’t be on the road.