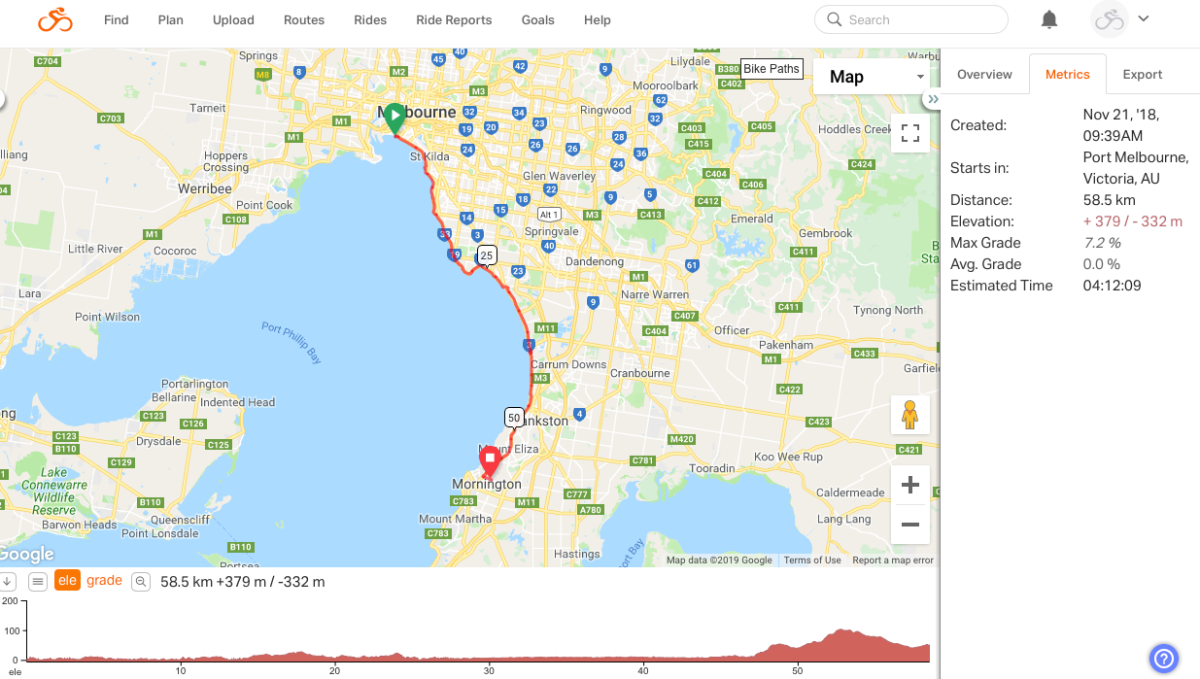 So, after 12 months of thinking, 3 months of planning and wondering – here we go! Magnum and I are heading off away from the Spirit of Tasmania down the Port Phillip Bay trails heading today for a caravan park at Mornington. But the

The ship docked just after 7am and us “walk ons” were let go at 7.30. The walkway was a bit narrow so I was let out into the road through the terminal. People in yellow vests directed me along the way obviously in touch via walkie talkies – “the crazy old fella is yours” I imagined them saying as they passed me on.

A simple right turn onto the Bay Trail and we were away.

Passing Luna Park I was reminded of testing the Anura outside the gates before buying it. Today though the air was filled with the scream of F1 engines at peak revs as they did final laps around Albert Park before the big race this afternoon. The sound brought back a memory of Sydney. A hill climb, a go-cart and a 6 cylinder 250 cc Honda racing engine and how it screamed through it’s 6 megaphone exhaust.

The dedicated cycle path continued for a while. Walkers, Joggers and Dogs had their own path. MAMIL groups prefer to take on the traffic on the road. This being Sunday there were many such groups annoying drivers riding 2 abreast plus a third. I had a very comfortable time cruising between 15 and 20 kph with few obstacles.

I spotted a Cafe and pulled in for a coffee. There was a 4 bay cycle rack with 2 bikes locked to it. Neither were going anywhere as the rust had set in and the chains were solid. I asked a couple of cyclists if this was a standard Melbourne thing – sort of anti-cyclist. They hadn’t noticed!

I tracked well with Ride with GPS until Frankston. Here my attempts to use “bike paths” got me into trouble but also found a really nice track running alongside a creek. A woman hailed me to talk about the trike. Eventually she asked the question bothering her “Are you all there … I mean have you all your limbs? … Oh, sorry”. I assured her I was complete in the limb department and rode the trike due to age, arthritis and the fact that I just like it.

I had designed the route to go out to an Anaconda shop in Frankston so I could get some gas for the stove and generate an entry in the latest cycle365 challenge. Unfortunately my route was turned into a shambles because it was not a small road but rather a major dual carriageway with no way to turn right! Well, without a rather large add on to distance anyway. Initially annoyed. I cheered up when I spotted a Katmandu store not far along. They had gas and they laughed when I asked. Apparently as I pulled up someone said a Jetboil would be the go on the trike. I then walked in and asked if they had Jetboil gas!

Working my way back into Frankston I ended up at a very nice city beach where a food event was happening. That took care of lunch!

Ride with GPS reckoned the maximum gradient to climb today would be 16%. ” What rot” I thought. “This is a by-the-beach ride”. Well, the App was right. As the road left Frankston there was only one road to take and that was the Nepean Highway. It was very steep for a bit and while climbing it I was overtaken by a walker!

Over that hill there were more up hills as we climbed past Mt Eliza. Then a downhill section was enjoyed before arriving at the turn-off for the caravan park and a $41 tent site. It was a nice site and did have power. All devices, lights etc now fully charged. Perhaps simple unpowered tent sites are a thing of the past here.