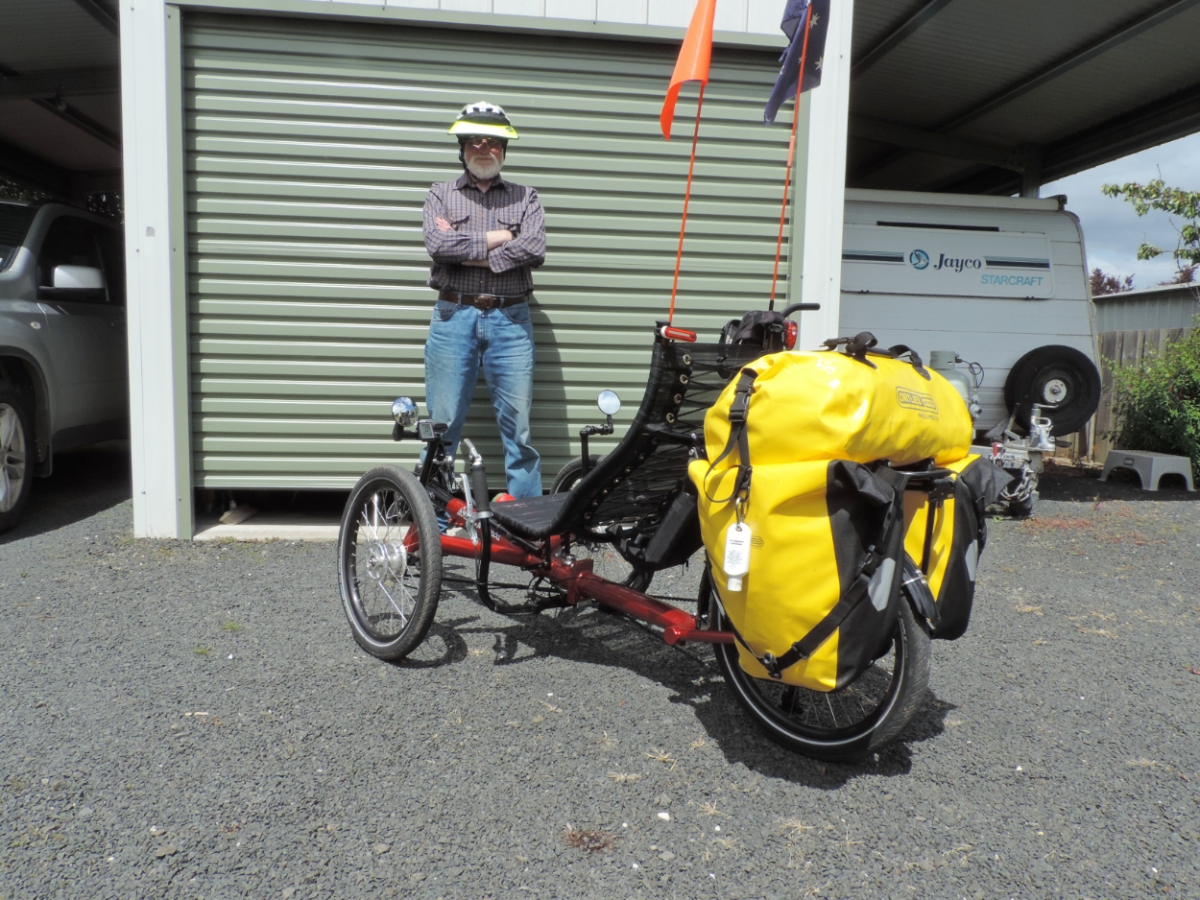 Monday was a day of wind and no riding.  Gales with gusts up to 90kph were reported and it seemed like they would blow away structures in the garden let alone a brave cyclist.  We got away with the garden intact which was good – no cycling time will be lost to extra garden tasks.

Tuesday wasn’t that much better but fine weather was forecast for Wednesday and Thursday – so how about fitting in the first S24O ride of the season?  It has been planned but no suitable times occurred until now.  Tuesday arvo was for kitting the bike up, finishing off on Wednesday morn.  Wednesday morning was also for wondering what adding another year has done to my abilities in the cycle camping arena.  We shall see.

1pm Wednesday and the trike and I rolled out, starting the journey by climbing Rip, Rack, Roar and Rumble then proceeding along Bishopsbourne Road.  The extra weight made itself known up the hills and I was left wondering how the climb beyond Bracknell will go.  Especially the gravel coated hills I had to walk the Brompton up last year.

My musings were interrupted by road works.  Before Bishopsbourne, “they” have pushed great heaps of earth from the edge of the road all over the chipseal for several hundred metres.  A “Stop / Go lollipop man” held up a couple of vehicles followed by me for a while as things were done on the road ahead.  What is going on?  Eventually we were given the go ahead and those in front took off with me trailing in their dust.  I rode along seeking solid ground for the rear (driving) wheel, trying not to take too long to get through.  Arriving at the next “Stop / Go” man there was no traffic banked up so I was able to settle down and travel at a more sensible pace.

Just before Bracknell it was possible to see the gap in the Tiers where our road goes.  During this brief stop for photographs I also checked all luggage – it had remained in position and was holding on well.

I had a nature stop at Bracknell and found that camping of some sort has been reinstated.  With rules though.

A pleasant stop over, it was back onboard and into a plug up the incline on the road running through Bracknell.  Into a headwind of course.

A little further on there was a brief respite from the wind and uplift gradients  but after that it was up hill all the way.

A feature of this ride is that, once the uphill starts, so do optical delusions.  The road sometimes looks like it is running downhill – but it isn’t.  If you coast – you coast to a halt !!  The small ring on the front is needed and is, by now, engaged.  It is a concern that I passed 2 squashed Tiger Snakes on the above  stretch of road.  Very colourful they were – probably means they are up for mating?  I had better watch out for sticks and avoid running over them.  Sitting on a recumbent trike you would be a bit close to the action if a stick turned out to be a snake sunning itself.

It is now quiet as the wind is blocked by the bush.  Cycling slowly means there is no self-generated wind noise either and birdsong can be heard all around.  Magpies, Ravens, Rain Birds (local name for the Pallid Cuckoo), Pardelotes and the occasional Kookaburra among many.

Just a little further along and the chipseal changes to gravel.  It was here my first attempt on the Brompton failed due to excessive rear wheel spin.  My second attempt (about this time last year) succeeded but I had to walk Brompton up 3 of the steepest hills.  Checking Ride with GPS I see we are talking gradients in the 11%’s on dirt.  With the trike in bottom gear I spun slowly up all the hills with minimal slippage to spoil the party.  This is promising but a long way from Maria Leijerstam’s abilities.  I have just read how, in 2013, she cycled her recumbent ICE trike up the Leverett Glacier in Antarctica on the way to the South Pole.  Her glacier gradient was 25% plus some and it took many hours.  And it was a bit cold.  And she had to be careful not to sweat.  BTW:  She succeeded and became the first person to cycle to the Pole.

Next, on my much tamer trip, was the steep downhill which last year was a bit of a worry on Brompton.  Today the brakes on Magnum, gently used, kept the descent under control while the three wheels made the descent fun.

Luckily at the above sign I turn left and run along into the camp grounds!  There I found the same spot as I had last year.  There are quite a few camper vans and mobile homes already on sites and more came in after I had set up.  A busy place considering the tourist season didn’t start until after Christmas a few years ago.  A sign of the growing popularity of this island and of the increased visitor loads to come later in the season.

I soon set up the One-Person tent and had a one-person one-pot meal brewing.  No phone signal so Mrs C could not be contacted.  Then it was time to check out / test the quilt I purchased last week from Deloraine-based Tier Gear – for use instead of the large sleeping bag.  I have been gradually reducing the size of gear in response to a demand from my legs to carry less.

When I began this cycle camping lark I used a 2 person tent, 2 closed cell foam mats for sleeping (hips said no to just one mat), then one closed cell and one self inflating mat, a heavy sleeping bag, mid-sized Trangia and other heavy kit.  Gradually I found out about lightweight insulated sleeping air pads, new gas cooking items (better than the old Camping Gaz), single person tents and now light-weight sleeping quilts.  How will it all hang together?  Hang on – let’s not worry about that right now – what’s this ..  a mosquito.  Out with the Darwin strength, very smelly, bugger off cream and on with the cooking.  It’s my plan not to get bitten after reading fellow cyclist Emily’s story of what the mosquito borne Nile River virus does to a human.  And I thought Ross River fever was bad.

So, how did it go overnight?  In a word – WELL.  Firstly arthritic, ancient bones, muscle and tendons can still perform all actions needed for cycling AND camping.  That’s good news.  The Exped sleeping pad still holds air, is still insulating well and still rolls up to the size of a large tin of vegetables.  I used a sleeping bag inner to keep the anti-mosquito oils from the quilt and the ‘inner and quilt‘ system worked very well.  Initially the quilt seemed too light and ephemeral to be of much use – but it stayed in place even after much turning from side to side and, most importantly, kept me warm.  Well, it wasn’t down into negative temps over night but it wasn’t warm out there either and I was comfortable.

In the morning there was a lot of dew.  Things were wet – not just damp.  Everything was quickly bagged up and loaded for sorting out back home.  When this was done I donned the winter gloves to warm numb fingers – that dew was cold.

From here there is a lot of downhill.  Quite fast for a dirt road and I ended up with a max speed for the trip of 48Kph achieved here.  Da Brim caused a problem though at 48kph when it came off the velcro fitting, lifted and then came down right across the eyes!!  That was exciting.

Da Brim fixed, the downhill cruise continued for quite some way until arriving at the hills just before Bracknell.  After that it was back through Bishopsbourne and just after I had another holdup with the roadworks.  Waiting at the head of the queue, the “Stop / Go” man told me he had recently returned home to Tas after working for years on road work projects in Queensland.  He informed me that each State has it’s own set of rules governing the management of road improvements.  Just like each State has it’s own set of Road Rules.  It seems unnecessary but I suppose it keeps more law makers employed.

Back home by 10.30am – this was indeed a successful Sub 24 hour Overnight camp ride and the sun was out to dry the dew soaked tent ready for next time.

Friday’s River Road.  The forecasters had promised us our first day over 30°C this season.  And it was.  No humidity to speak of so it was very enjoyable riding conditions with pleasant afterride-coffee under umbrellas sitting outside The Empire in Deloraine.  On the road I was passed by a rider from Sydney over here for a week of cycling without traffic.  He was very interested in Brompton.  After asking lots of questions it sounded like he would be heading straight to the Brompton Dealer in New Town, Sydney on his return.

The last ride of the week was to be with Colin in Launceston.  We were to check out some of the Launceston shared trails.  It rained on the way in though and Colin’s trike in the back of his Ute got very wet.  A soaking foam seat was not for riding on.  I decided to take in a short ride and took the opportunity to trial setting my seat on the lowest level (it has 4 settings), raking the angle back more than normal and do a test ride along the levees.  Quite a change from the highest seat position to the lowest and so far, with the extra rake, the base of my spine hasn’t played up.  I damaged it in a fall when I was 14 and certain seating positions are no good.   A Honda 250 trail bike had to be sold because my coccyx and the seat were a match made in Hell.  But, so far, the lowest and more layback Magnum seat position is OK.

Where to next week?  Perhaps a S24O (or more likely  S36O) overnight camp to Deloraine.  Let’s see what the weather does.