The weather shut things down early this week.  Grey and wet or grey and threatening wet is not conducive to riding.  Later it got better.

Front picture “has the red light on the camera gone off yet?”.

I said last week the Anura was for sale on Gumtree.  Well, I had three people interested in it but Brian from Swan Hill got in first.  So Wednesday and Thursday were spent obtaining a suitable bike box, taking the trike apart to fit it in said box and taking it to the freight depot out by Launceston Airport.  Luckily they were the wettest days of the week.

It is estimated to arrive in Swan Hill (north-western Victoria) by Wednesday and then Brian will be putting it back together.  I hope to get a picture of it with Brian riding to complete the Anura story on these pages.

Before deconstructing Anura I took it for a short ride around Longford.  I am still amazed at how well it goes and with a really sweet gear change now the damaged freewheel has been replaced.  I hope Brian enjoys his first ride as much as I enjoyed my last.

By Friday I had logged minimal kilometers for the week.  I had loaded all camping gear needed for an overnighter onto the Magnum to see if I could and then I decided to take it to Bishopsbourne to see how the extra load affects it.  I had to be back by 12.00 though as Don, a friend from Hobart, was coming to lunch.  It was grey and cloudy and humid and damp. 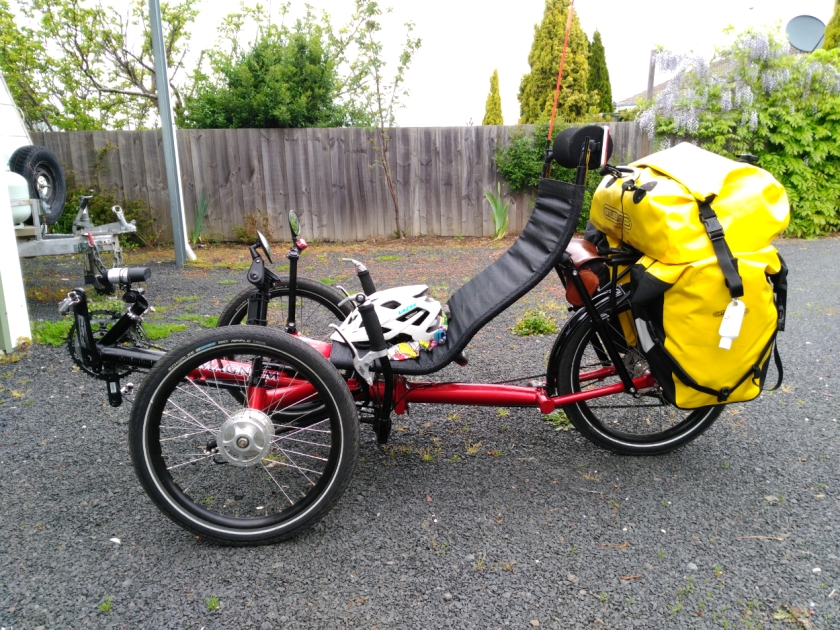 With the panniers on it is interesting to see just how much space is unused using DF compatible gear.  Recumbent panniers extend into the space under the seat – food for thought.  I have two Vaude panniers but I can’t see how to fit them alongside the Ortleibs with the current setup.

Up Rip, Rack, Roar and Rumble we went.  Thank goodness for the new tiny 24t chainring.  Using 3rd (from bottom) I was able to spin up the hills OK but the load was certainly noticeable.  Along the flat and down slight gradients the load was not so obvious except it dampens the overall action of the trike and so the road does not seem so lumpy.   Thinking about all that extra weight on the rear wheel, I decided not to.  The bike has 5 stars for touring so the wheel must be strong.  This is what it was built for.  Mind you, I would like to stop some of those creaky, growley sort of noises coming from the back.

We turned at Tioberry as the day was not very nice and the clouds were darkening. 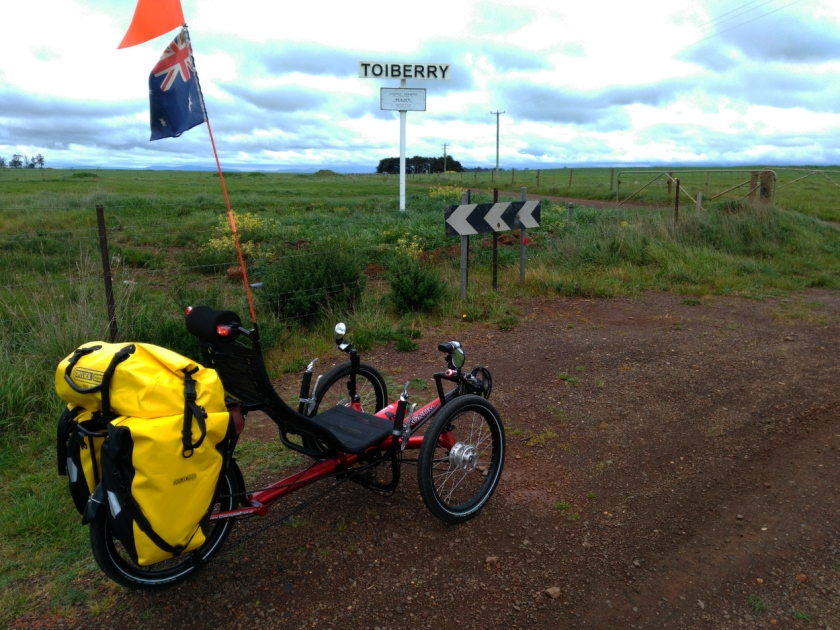 I decided to run down to the Illawarra Road rather than use Wilmore’s Lane so that I could check how a trike travels along the Illawarra Road heading towards Longford.  In particular – how will the trike fit on the hard shoulder?  By the time we hit the descent to Illawarra Road it was raining.  Once the glasses are wet visibility doesn’t deteriorate any further it seems.  The front wheels with no mudguards throw up water off the road c/w grime, mud and even cow shit and the wind blows it onto me.  An interesting thing to find out.  The water doesn’t just spray out the back then?

Illawarra Rd starts OK but then there is quite a lengthy stretch with hardly any shoulder at all.  I checked before entering it, nothing behind.  Before I had finished, a truck roared past at the full 100 kph forcing oncoming traffic onto their hard shoulder so he (the truck) could pass me without slowing.  An example of an impatient driver.  He would say I was an example of something that shouldn’t be on the road.  Not sure I totally disagree with him, on that road.  I wonder if the authorities would consider putting in a cycle lane?

It was still raining as I pulled in at home.  After putting things away I checked self and found I had quite a lot of road garbage in the beard and over face!

Saturday and I went to Bishopsbourne again but this time without luggage and to add some ks to the weekly total.  But, hang about, what’s this coming towards me?  It’s another recumbent!!  We stopped and had a chat.  A homebuild – but this time made from carbon fibre.  2 wheeled, front wheel drive and very, very light.  We agreed that in 8-10 years of cycling the area Colin and ourselves were the only recumbent riders we had met on the road. 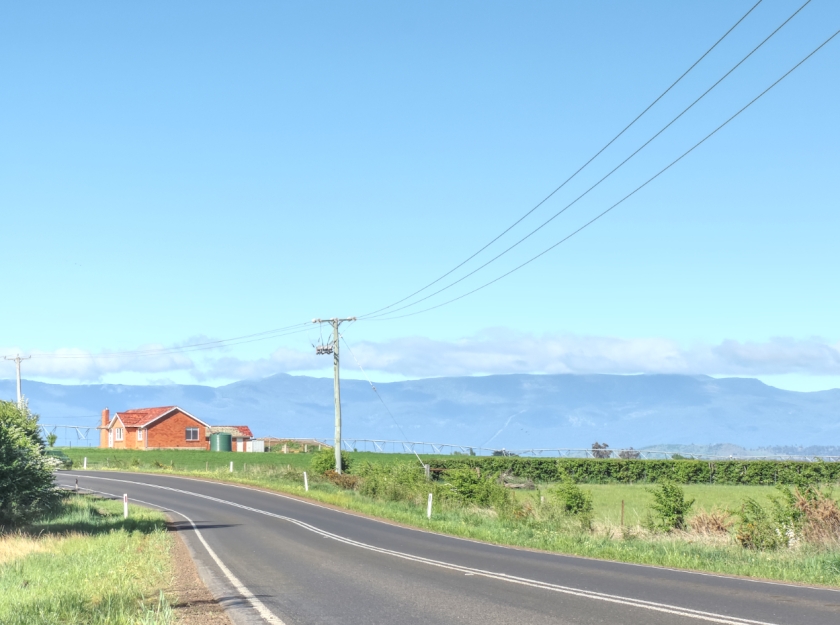 As I cruised along Cressy Road laid back in the seat and minimal traffic passing, I watched a Wedge Tailed Eagle circling and the clouds over the Tiers.  What a magic morning.  Cressy Road with no trucks, few Utes and time to look around. 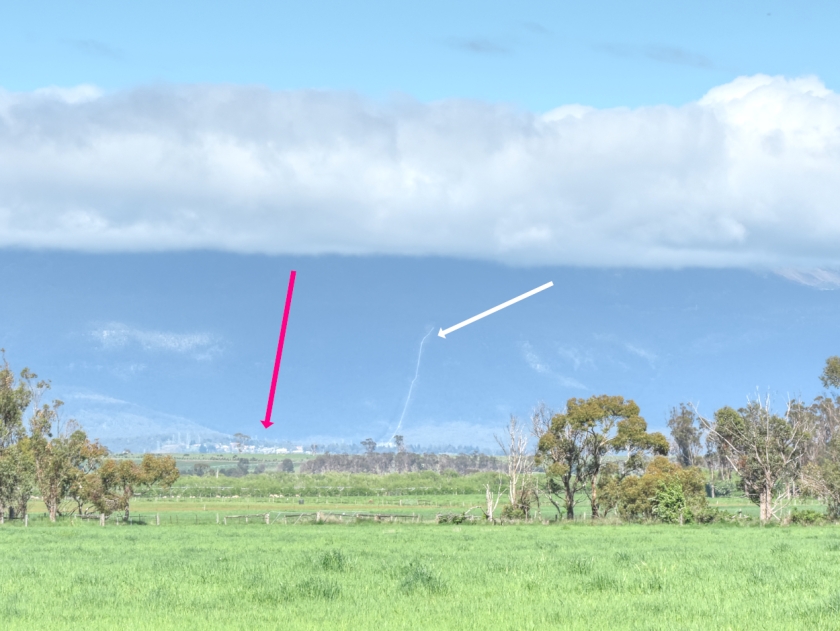 I was heading to Poatina (red arrow) which is an ex Hydro village.  The village was for the workers building and running the Poatina Hydro Power Station – water via the pipe (white arrow).  When the village was no longer required it was sold, bought by a group from the mainland who use it to get troubled youth back on the straight and narrow.  Other community minded people can live there too and the place, for me, has a nice quiet friendly vibe.  Other people I know can’t stand it. 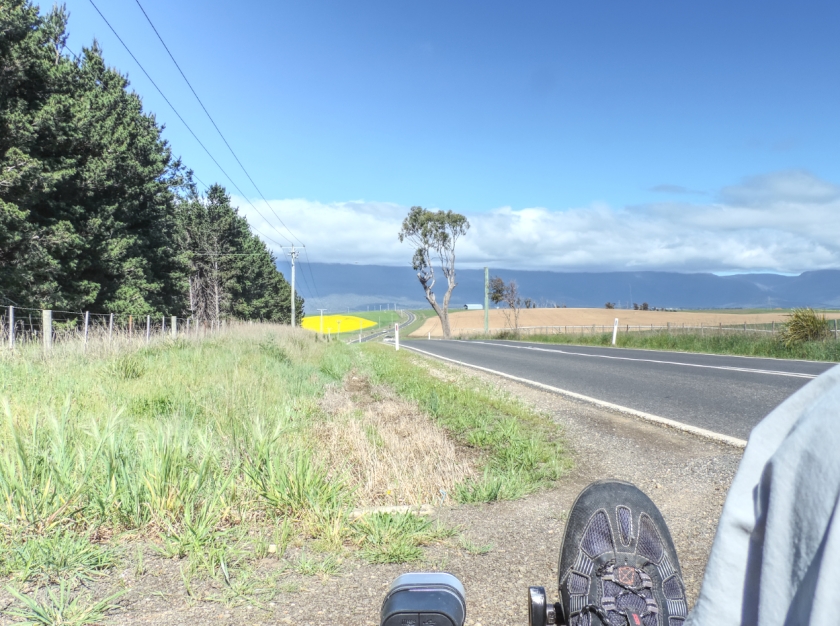 The road winds its way through agricultural land, these days heavily irrigated.  There were a few bikers out for a shot at the bends up the road to the top of the Tiers and several 4WDs towing fishing boats heading to and from the lakes.  Nobody seemed irritated by the trike and many returned waves received from drivers going the other way.  The lovely morning seemed to set the tone.

Sue drove past and pulled up.  She was a bit early not quite knowing how far it was from home.  We had arranged to meet at 12.30pm but Sue was an hour early.  No worries, she will have time for a good look around.

The road to the top corkscrews its way up this gap in the cliffs.  The top is a long way past Poatina so you won’t see any pictures of the 25kph hairpin bends today. 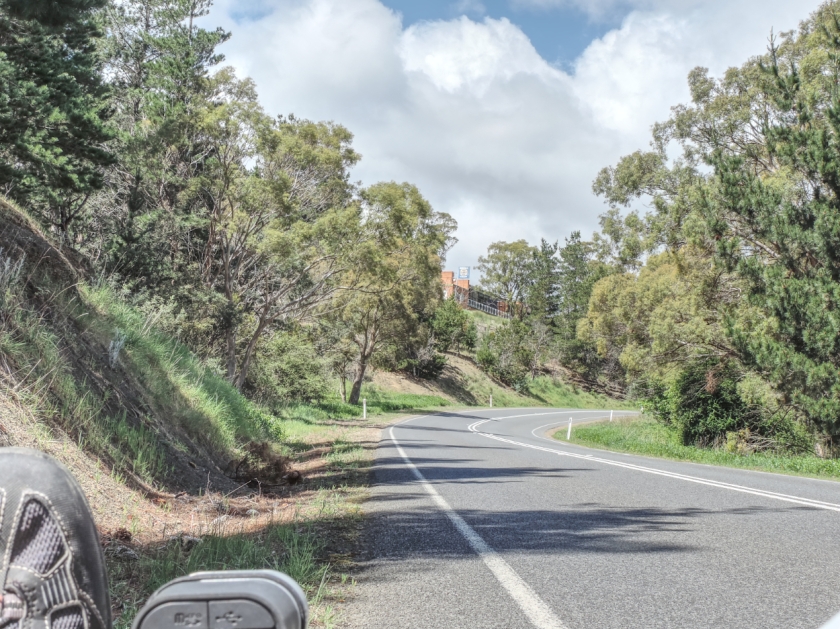 Onwards and upwards and the Hotel at Poatina comes into view.  Just a few more 100 metres to go.

This is the turn off.  Had to miss!  The power transmission lines come from the power station to our right, go through the village and down, heading towards Launceston.

And I had a Latte at the Tiers Tea Lounge.  Well, actually I had two.  Nothing broken today but my first coffee was taken while enjoying a Lamb and Mint sausage roll with salad.  Bloody beautiful it was too.  So much so we forgot to take a picture!  So, a second coffee after we remembered and this picture was taken.  No trike?  No, I had already stored it in the car for the trip home – you can tell by the chain oil on my front. 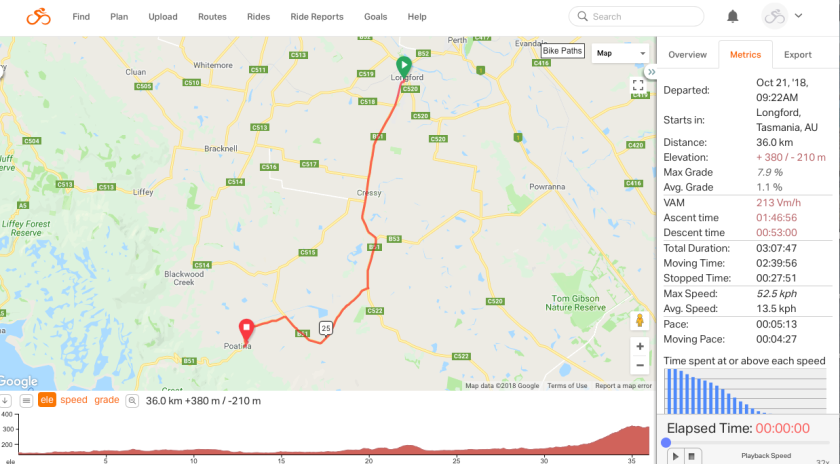