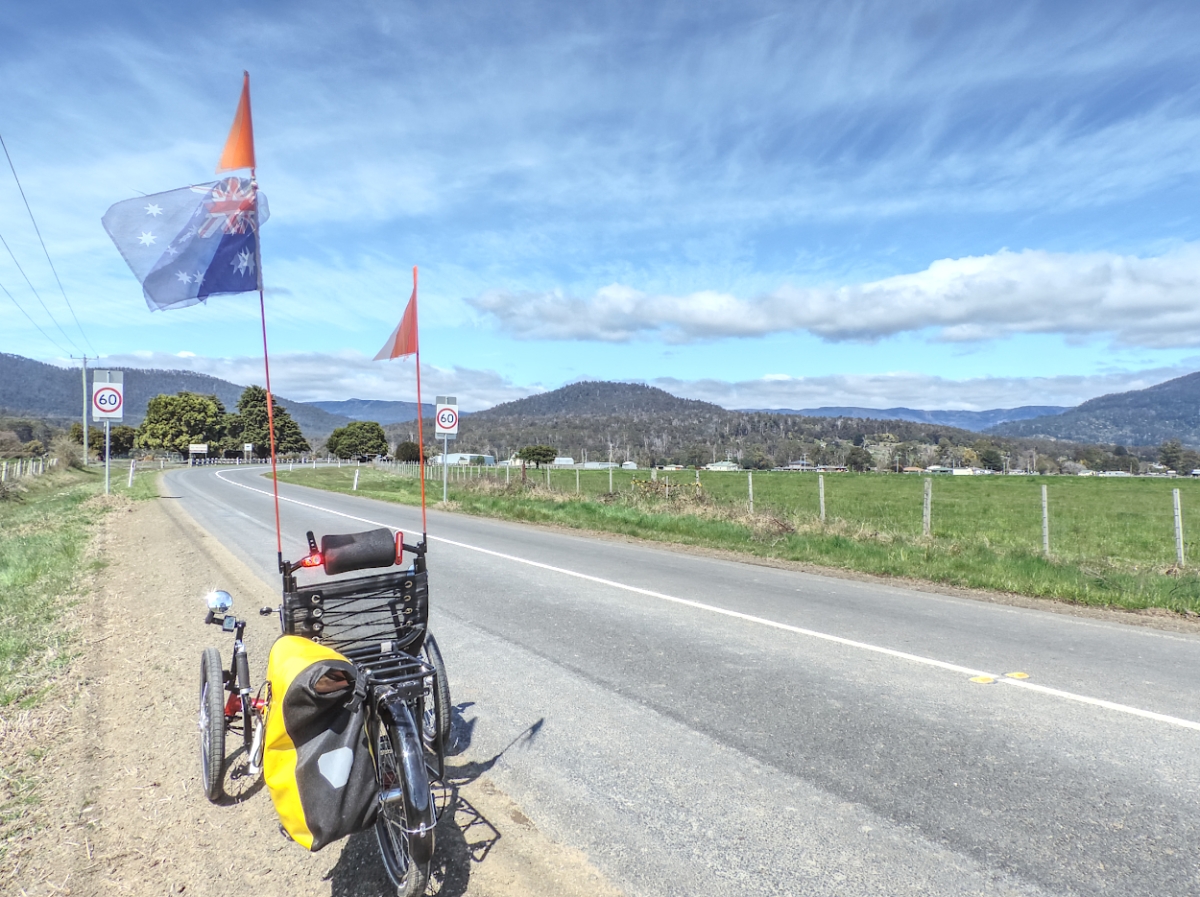 This was a ride of two distinct parts.  Part 1 – a slow push into headwind and then uphill.  Part 2 – a rush downhill and then racing back to Deloraine. 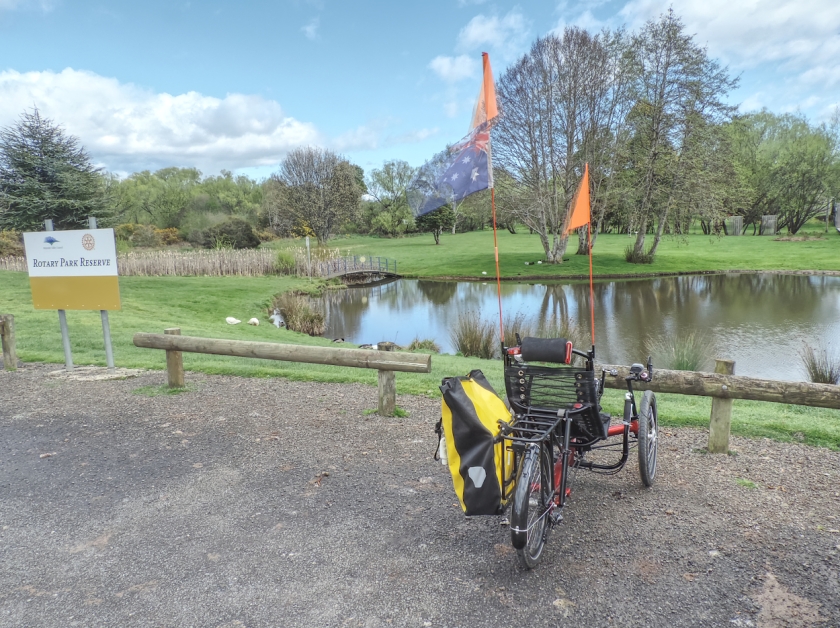 The ride began by the duck pond at Deloraine.  For the annual Deloraine Craft Fair this pond is stocked with trout and the kids are given the opportunity to catch one.  Today it is simply duck heaven.

I had a bit of a problem with the catch for the seat after unfolding the Magnum.  It seemed OK at this point so we set off along the Highland Lakes Road heading towards the Western Tiers.  The wind was blowing and I took things easily as a muscle above the knee in each leg were complaining.  I thought back to the previous day when I rode from Cressy to home via Bishopsbourne.  We had driven to Cressy for lunch and then I pulled the trike out, unfolded it and set off.  After a kilometre or two these muscles above the knees were really hurting and I thought I might have to call for the car to return!  After 5 k it was bad.  I stopped to rest them and while walking about noticed that the seat was set higher than normal (there are 4 height positions).  Not linking seat position and knees together, I just dropped the seat and raked the seat back and set off again without thinking much about it.  Hang about …. magic … no knee pain!  The more upright seating position had felt a bit squashed around the guts but fancy it causing knee problems.  Another lesson learnt. 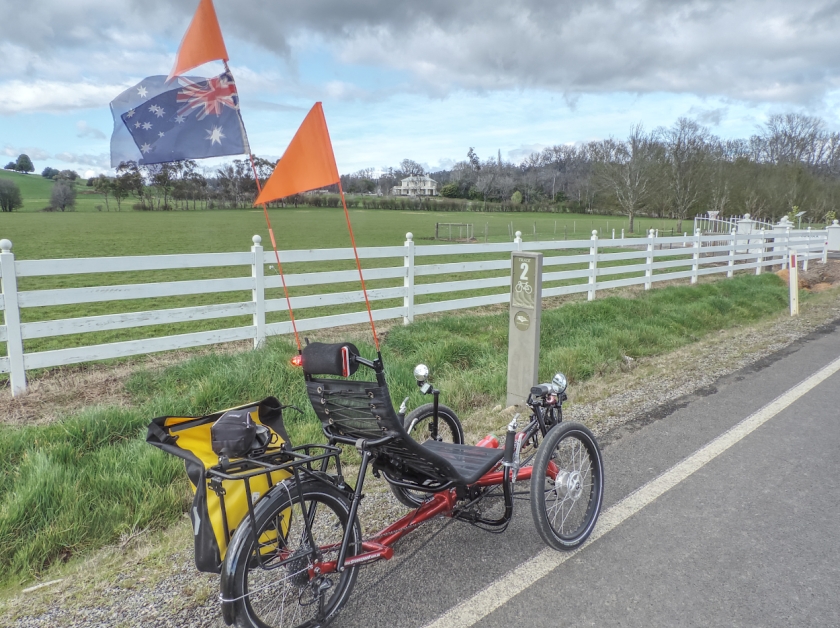 I stopped by Calstock (white house in the background) where there is a post with the number 2 on it.  This is one of a series of posts installed by the Meander Valley Council to tell cyclists when to listen to “podcasts” (well, .mp3 files) that can be downloaded from the Council website.  If you play track 2 here you will find out all about Calstock.  There are 4 documented Western Tiers rides in all and each ride has its own set of podcasts and posts.  The details can be found HERE.  This post is part of the Great World Heritage Ride. A couple of years ago I cycled all four routes and found only a couple of posts missing.  The people of Bracknell it seems did not like theirs and had disappeared them.  Should I do the rides again?

We have just past the point where the Meander Road turns off the Highland Lakes Road and you can see from the flags that the Roaring Forties have strengthened.  Meander Road now climbs over a small range of hills and then drops down into the Meander River valley and heads towards the township of Meander.  Once in the valley my cycling day turned into a real slog.  Flat paddocks, headwind, small chainring, speed between 6kph and 9 kph depending on wind gusts.  I checked for flat tyres (not believing I had one but if I did have a flat I would feel a fool for not checking).  I checked the brakes were off (they were).  I plugged on.  The Magnum wanted to go backwards and did so when I stopped for the picture below. 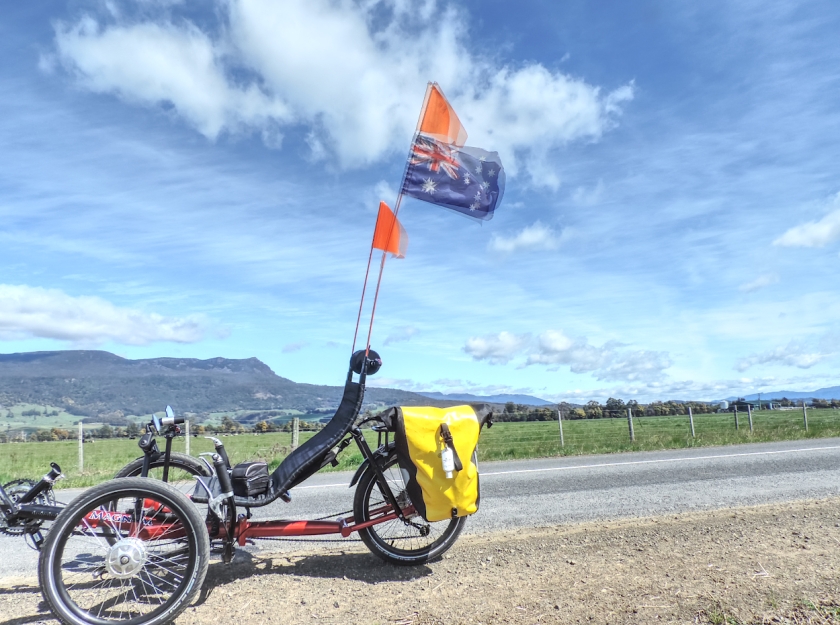 The sky was wonderful.  Picture stored on the camera card, I plugged on! 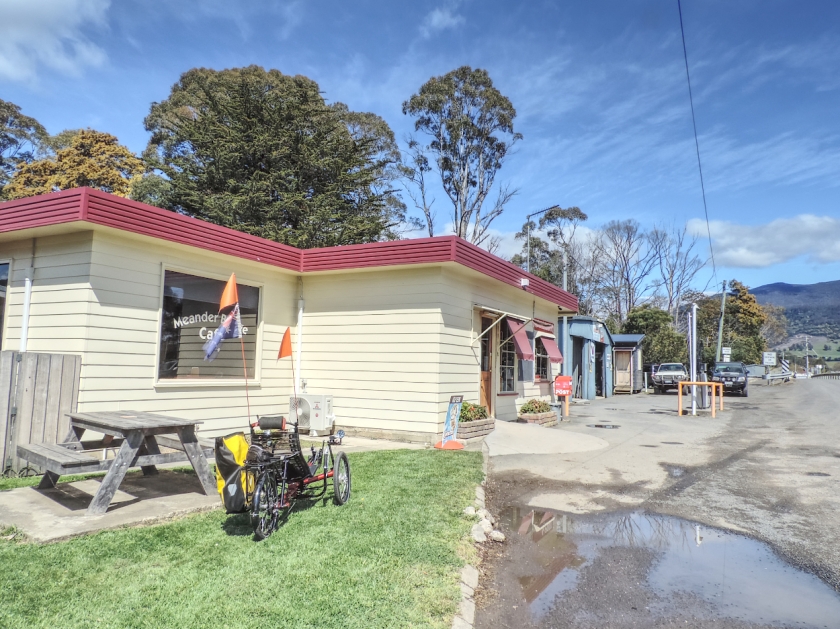 Slowly the township came into view and the Meander Bridge Cafe was a welcome stopping place.  Would I go further?  Would I turn around?  Bugger it, let’s have a coffee and sort that out after.

The coffee was good and the rest out of the wind was better.  My knee muscles still twinged a bit from yesterday as I walked into the Cafe but seemed OK when I walked out.  Let’s just cycle down to the Meander River bridge and look around.  That went OK but there was nowhere to stop so let’s have a look a bit further on.  The road was now protected from the wind so let’s climb this little hill – and so it went on.  Soon I was aiming at Huntsman Lake or rather the big climb up to the lake, just to see if there was any chance of me getting up it.

The views started to look more like hill country – it was well worth the effort.  A few more ks and I had climbed the first of the steep hills and was chugging away in bottom gear climbing the really steep one.  For the first part I managed to spin efficiently by pulling and pushing the pedals but I could only do that for so long.  Then came a period of pushing forward only, going forward jerkily, breathing deeply and much muttering “I think I can, I know I can … “.  And then we were at the top.

The views of the Tiers were now remarkable.  In the above picture we can see the high paddocks at the bottom, the line of wattles still flowering yellow, the darker green band of eucalypts and then the scrub and the rock of the peaks.

At this point the chipseal stops and gravel roads go forward to the boat ramp or to the left to the Dam.  I chose to head left to the Dam.  The road was topped with big, round gravel.  In part wonderfully smooth, in part loose, in part deep and in part corrugated.  I arrived at the Dam shaken but not stirred with all teeth intact and my glasses askew.

The Magnum ground to a halt in a gravel drift and after taking the above shot it was time to eat a snack and drink some water while relaxing in the seat admiring the view.  A benefit of recumbent travel.  The smile lasted quite a while but up this high the wind had returned and was it was pretty cold.

Not surprising as the hills on the far side still had traces of winter snow tucked into crevices.

Time to go back.  Well, that was fun!  Once off the gravel road the wind was behind and the road went down.  So did the trike – fast.  After touching nearly 60 kph, with bends approaching I found braking and steering a little twitchy.  I need more practice at high speed trike handling before just letting it rip again.  All safe and good fun in a go-kart kind of way but would like to feel just that bit more in control!  Why did it go so fast?  Well, that steep hill actually has a gradient of 17.8% at it’s steepest and quite a bit of it was well over 10%.  End result, a rapid descent back to the Cafe for lunch.  As I walked in I was welcomed back and asked “Did you climb The Grunter?“.  “Yes” I was able to reply!!

After lunch I got back on the trike and the steering wouldn’t turn!  There had been an interesting clunk as I arrived onto the grass outside the Cafe but need for food overrode investigation of cause.  The seat had come out of it’s sockets and jammed the steering action.  Soon fixed and the ride back to Deloraine was a delight.  The wind just shoved us along at pedalled speeds of over 30kph for stretches of road at a time.  Hills came and went and were easily climbed.

I like riding a trike with a good, strong tailwind!

Here is a short video of the ride.

What else happened this week?  Well, there were several rides in the Bishopsbourne area and Friday’s River Road ride.  All undertaken with the trike as I strive to condition the “Magnum recumbent muscles”.  Although I have been riding the Anura for a while, the Magnum muscle requirement is slightly different again.

Greenspeed have despatched a package containing a derailleur for the Anura and a 24 tooth ring for the Magnum to replace the current 30 tooth.  That should arrive next week.  If I can climb 17% with 30 teeth what can I climb with 24?  Mount Wellington?  The only question will be are there enough hours in the day to fit such a climb in, ‘cos I and the trike ain’t quick.  An average speed of 12.5 kph for the ride out and back to Huntsman Dam give an indication!

The Vivente was sold this week.  Sad to see it go as it’s the end of an era.  I bought it as a motivator to exercise after prostate cancer surgery but now my 2 wheeled touring days are at an end as arthritis makes it just too uncomfortable.  Luckily I can still comfortably ride the Brompton, so 2 wheel cycling will continue.

Happily the Magnum is comfortable, easy on the hands and should be able to carry all the gear so, as I planned, it should become my touring vehicle for the next few years.

NB.  I worked out how I didn’t properly latch the seat catch into position causing the seat to come loose and unhooked itself.  When I got to Deloraine on Friday I thought I had applied the lesson learnt but the catch came undone again.  Further checking and I reckon I really know what I am doing wrong.  The next ride will prove one way or the other.

Sunday Ride – the seat did not come loose!!  I will finish this week’s post with a couple of comments from the Sunday Ride.

Pivot irrigators are firing up.  I got wet twice this week being unable to avoid the end spray. 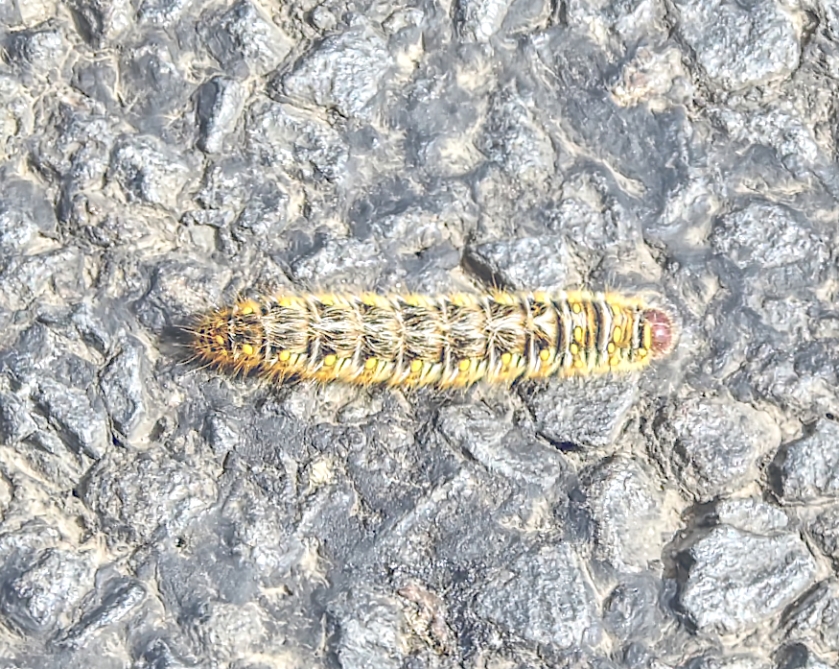 There were thousands of these crossing the roads from one paddock to another on Sunday.  I expect the farmers want us to ride over as many as possible.

Now to settle back and watch Bathurst – the annual motor race around Mt Panorama at Bathurst.