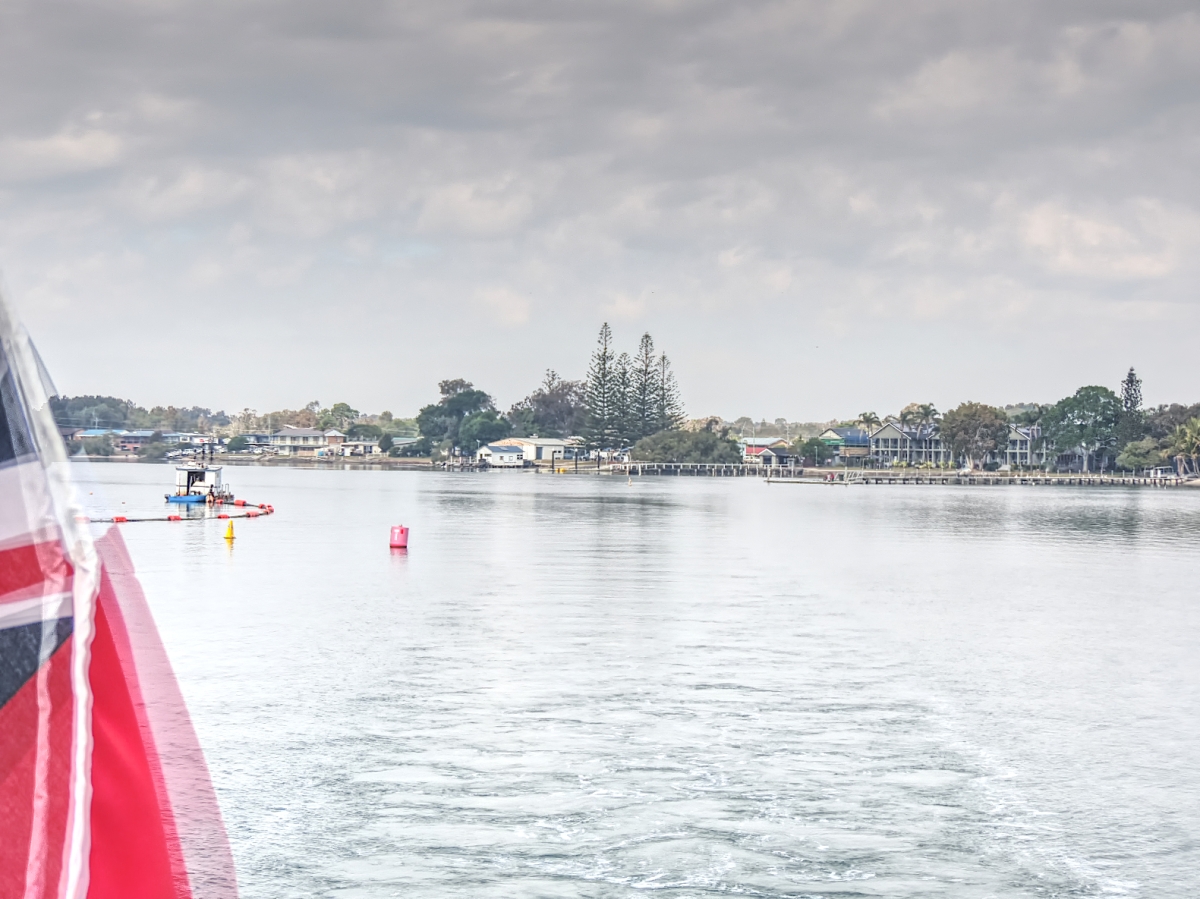 12 kilometers cycled!  A record low for 2018.  Really things were just not conducive to taking a ride this week.

On Monday we headed further north to Coffs Harbour and Carol and Jon’s residence on the hill.  It was once a banana farm and as bananas need to “walk” uphill year after year this must have been exactly the right environment.

We stayed for 3 nights in this delightful sub-tropical place.  The garden has been planted with all sorts of fruit trees by previous owners (Carol and Jon have lived there some 18 months).  There are citrus, mangoes, avocados, bananas, star fruit, passion fruit and I forget what else.  The view out over the ocean gave us whale watching time – using binoculars and Jon’s telescope.  Previously at Port Macquarie we had seen the Hump-Back whale spouts as they blow but now we could see the actual creatures splashing about and diving when they thrust the tail out of the water.  It was like watching a firework display with the ‘Ooooohs’ and ‘Ahhhs’ when a tail raised and smashed down.

Unfortunately Jon was unwell and Sue’s vertigo was still playing up so the visit was a little subdued.  The only cycling at Coffs was when I tried to cycle up the driveway to the house.  Very steep.  Engaging low gear I couldn’t get started.  Dropping back and making run-up room I got going but when I hit the hill the front wheel lifted as the pedal was depressed.  I couldn’t get far enough forward to counter this so had to give up. 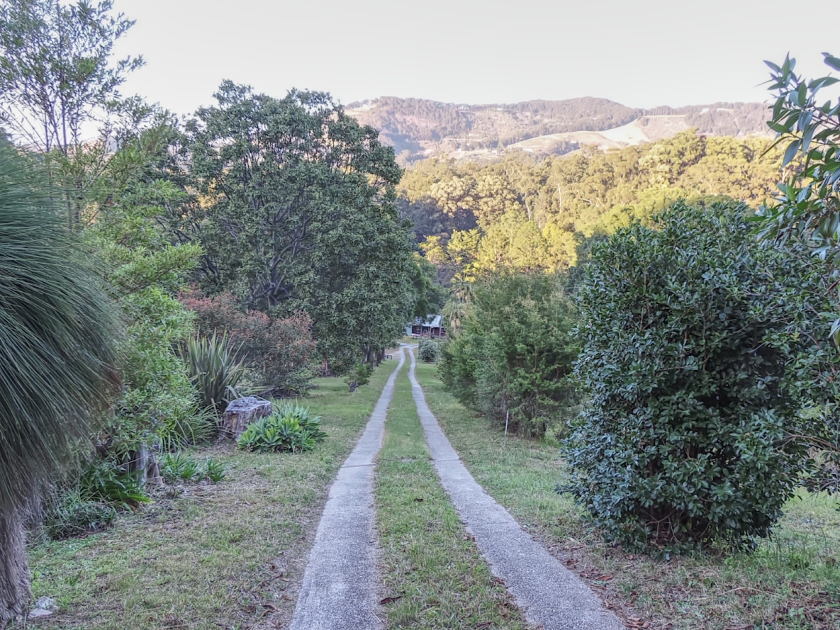 Looking down the driveway 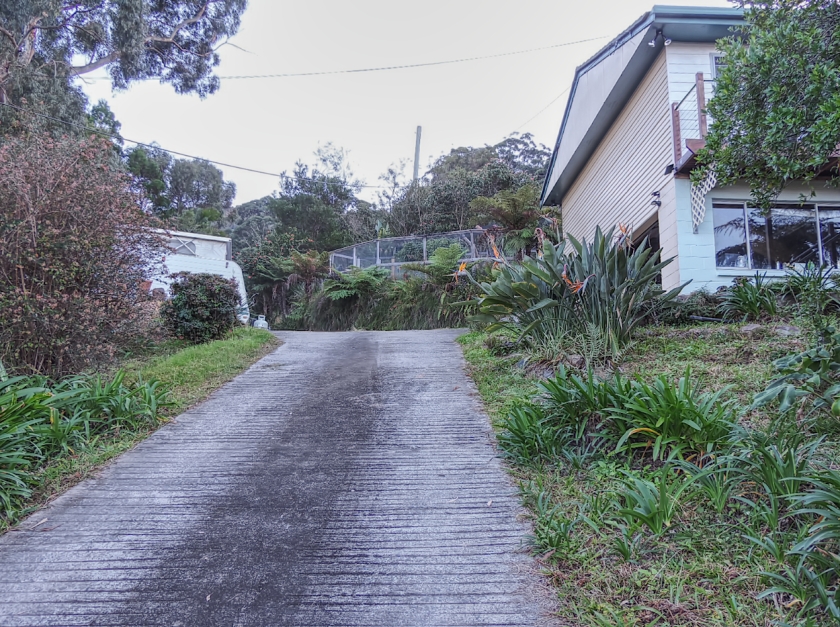 This top section gives some idea of the steepness

From Coffs we headed north to Yamba at the mouth of the Clarence River.  We broke the journey at Ulmarra where we had lunch in a pub beer garden backing onto the river.  If it wasn’t for the smoke it would have been a perfect spot.  Smoke?  Yes, we are in sugar cane country and it is the season for the stubble to be burnt off.

Onwards and into traffic jams.  The Pacific Highway up here is undergoing transformation from a 2 lane country road to a 4 lane intercity freeway.  This means a lot of road works.  The biggest blockage and the best is at the site of the new road bridge across the Clarence 10ks out of Yamba.  It is truly a huge bridge. 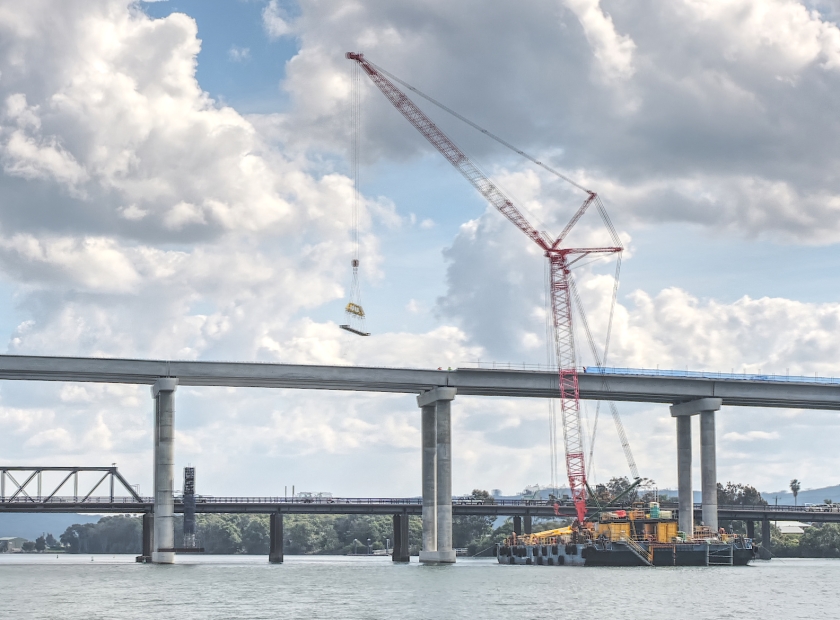 The new bridge dwarfs the old

Sue was feeling quite bad by now and we had discussed the situation several times.  She decided to head home.  So we hopped onto the internet to book flights only to get a tad pissed off!  We could find flights with an overnight in Melbourne and not much else.  Then one appeared without the overnight and we signed up for it only to go through a complete registration process to be told that the flight is no longer available!  The next morning we went to Yamba shopping centre part II (3 ks away) where we believed there was a travel agent.  There was and she was able to get Sue flights for the next day (Saturday) with only one change in Sydney.

So Saturday we set off early to drive back to Coffs and the airport.  All went OK.  We got there on time, the plane left on time, the 25 minutes to disembark flight 1 and embark on flight 2 was time enough and in 4.5 hours Sue was at Launceston airport being picked up by our lovely neighbour.  4.5 hours?  It has taken us 5 weeks to drive to Yamba!!

Saturday afternoon I had a cycle around some of the paths around Yamba.  This took me past some great beaches which are being heavily used right now.  It was 23°C so I was in cycling shorts for the first time this trip.  This also brought out others in bikinis and board shorts so I still looked overdressed. 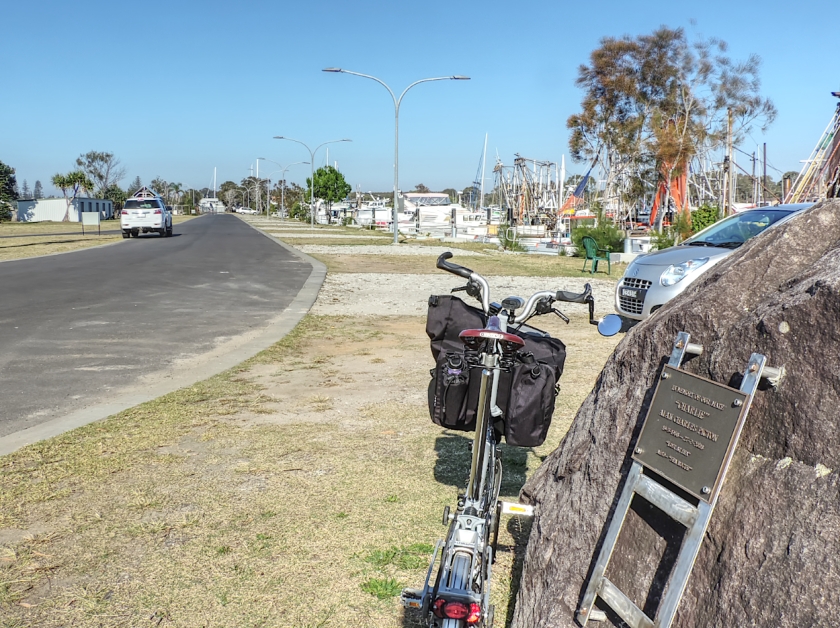 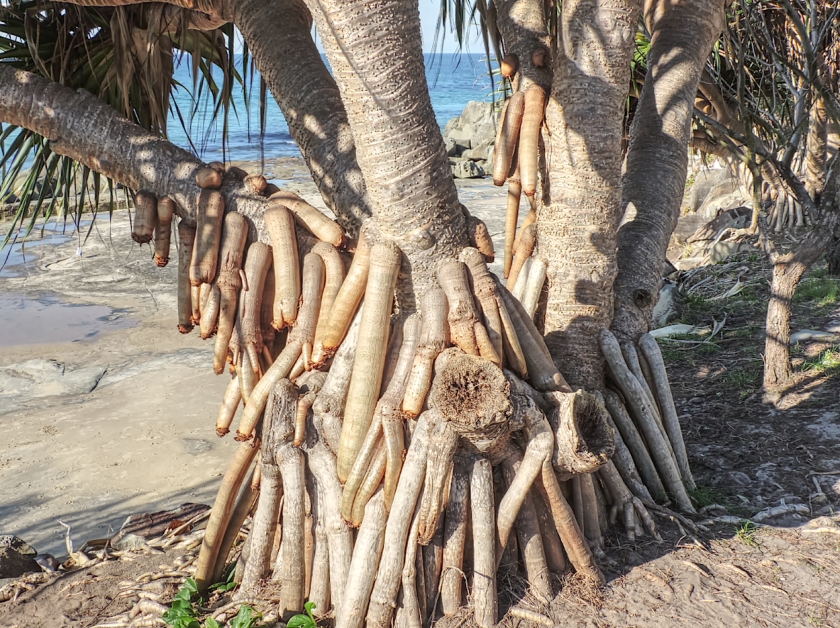 The sub-tropical vegetation is interesting 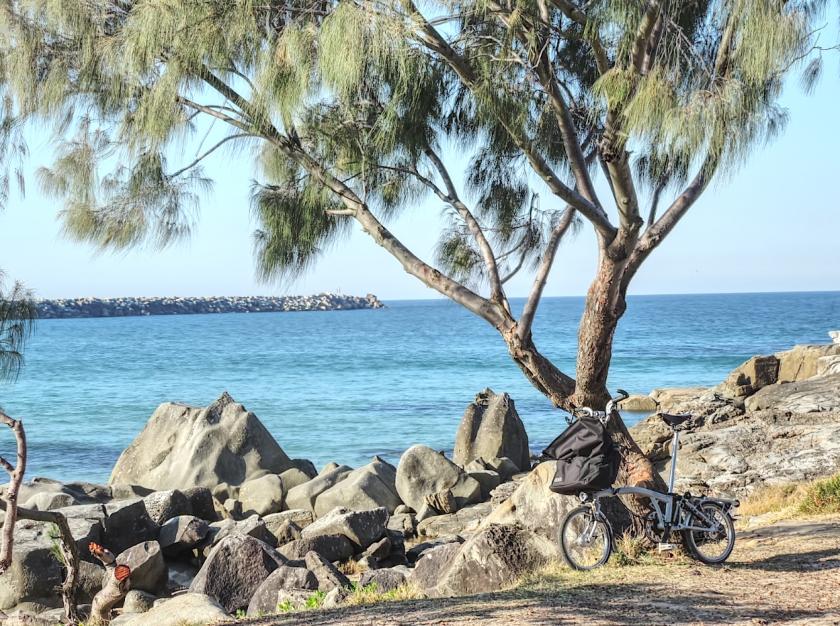 BUT Saturday night and the smoke from the burn offs wafted in and I had a wheezy time of it thanks to asthma.  The smoke and my lungs were still bad in the morning so I decided to cut my losses and head for Glen Innes on top of the Great Dividing Range and start my solo journey home.  This means a whole new set of procedures to pack up the van and get it ready for travel.  With nobody to double check you, YOU have to do it!  I carefully prepared the van and backed on to hitch up.  The latter involved backing a bit, stopping, getting out, checking the relationship of tow ball to tow socket and doing it all over again until the two items match up.  Not hard but best taken carefully.  As I did all this there was a bit of a crash from further down the park.  After I had fixed ‘van to car I checked and saw someone had started to pull their enormous van out with their enormous SUV and the caravan had separated from tow vehicle and nose dived onto the road – hence the crashing noise.  There were heaps of people lending a hand so I pulled out leaving the road clear for their rescue mission.

The drive from Grafton to Glen Innes is a climb up into the Great Dividing Range.  It was full of smoke to start with but eventually that cleared and the views were expansive.  23°C at the start of the main climb and 14° at the top of the Gibraltar Range.  If only I could have cycled down the climb!!!

Hopefully my next report will be a bit more about cycling.