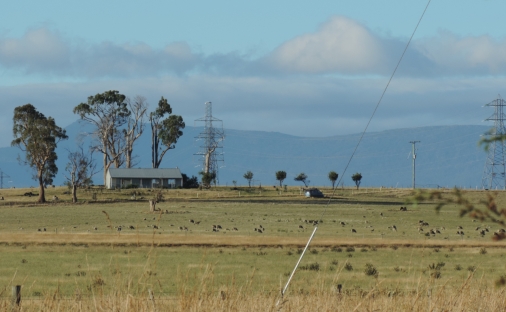 Most riding this week was around a loop running out of Longford, along Illawarra Road to Bishopsbourne Road, up Bishopsbourne R until the left turn along Wilmore’s Lane, to the end of Wilmore’s L then left and back into Longford.  Approx 15 ks.  Mostly the views are similar to the above picture and the roads are country lanes.  The stretch on the Illawarra Road is different.  It the link between the Midland Highway and Bass Highway and carries a lot of truck traffic.  Not many log trucks but plenty of double trailers carrying 3 containers or multiple bales of hay or large (wide) farming equipment etc.  Luckily the loop only involves under a kilometre to travel on this road.  This week I have been riding early in the mornings to avoid the warm temperature building during the day – the days have been maxing out at between 28 to 35°C ‘cos it’s summer.  It’s been much hotter on mainland Australia but 35° is enough for Tasmanians.

Recent changes to the Tasmanian road rules state that cyclists must be given space by passing vehicles – 1 metre on roads with speed limits up to 60kph and 1.5 metres on roads with higher limits.  Most drivers conform and give us space.  On the Illawarra everybody is travelling in haste and don’t give a stuff so I take to the hard shoulder bumping and bouncing my way to the junction.

Friday was a run up the River Road in Deloraine with the PoWs (People on Wheels) – a small group of 6-7 riders (depending who is available) some slow and some fast and some on electric bikes.  River Road runs alongside the Meander River to start with and then winds up through woodland and paddocks to it’s junction with Porters Bridge Road.  This Friday we stopped there and turned back to head for the cafe.  Our lead rider came across a reasonably sized Tiger Snake on the road – the rest of us didn’t see it as it took to the bush after seeing Glen..

There is a reason for the Brompton distance cycled being so small.  On Monday I realised the gears were clicking too much.  After some investigation I could see the chain was trying to go too far over and climb onto the plastic disk protecting the wheel when changing the 2 speed deraillier to the low cog.  The fault?  Well, after several hours of adjusting the “chain pusher” limits and the cable tensioner and the Dog Leg and maybe other Brompton specific adjusters, I did manage to get it to the stage where the clicking stopped.  It took several days though spending an hour or so at a time.  Looking on the ‘net it would seem the new in 2017 gear shifter redesigned bikes are suffering from this problem.  As yet I haven’t come across the reason why – people just spend hours adjusting things until the noise stops.  Like I did.