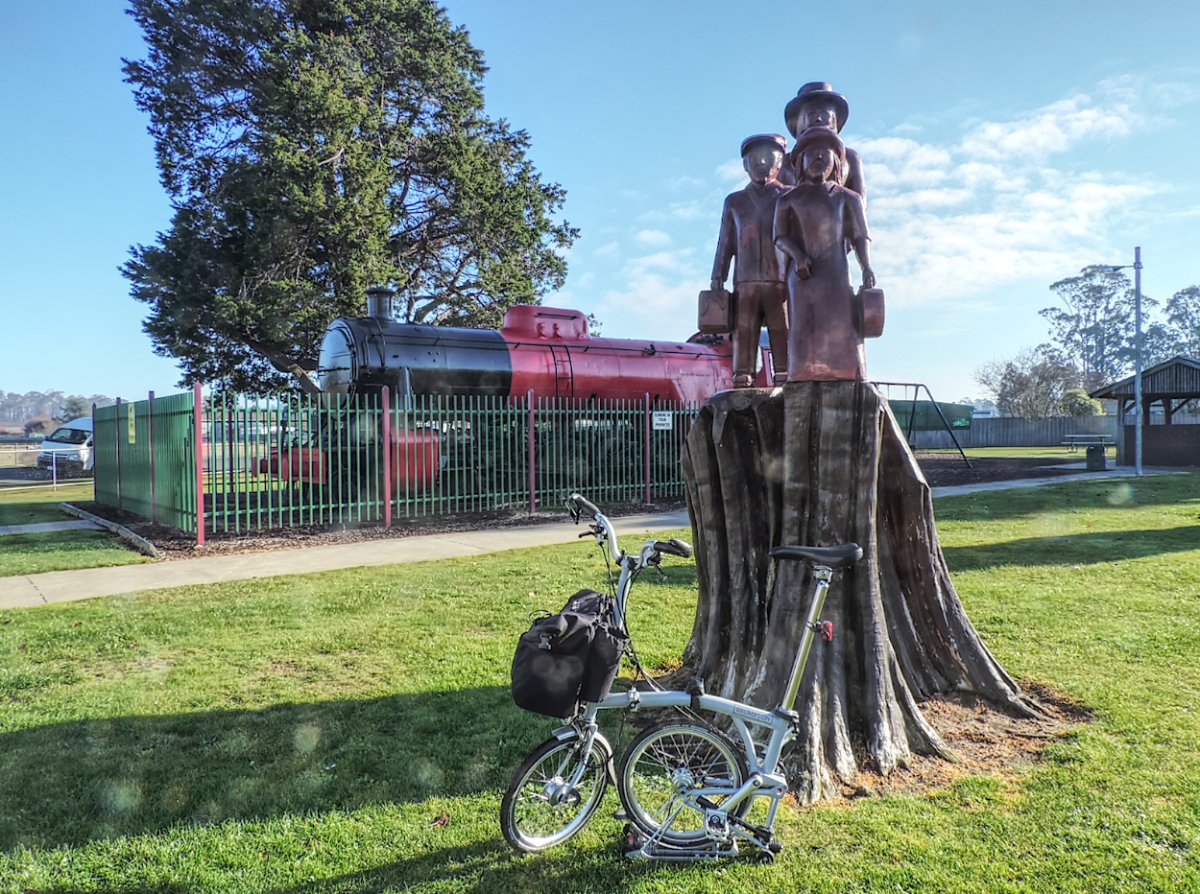 Each morning we wait with bated breath – will they? won’t they? What – you ask?  Say “frogs and fosts” or “fosts and frogs” on the weather report.  So far all correct and no laughs.

For 5-6 days in a row we awoke to the infamous Longford fog overlying the white frost blanket.  By 10.30am the sun had begun to poke through and the bird bath thaw but the temperatures remained low.  In fact it was still at the flashing dashboard warning light level of < 3°C.  Waiting for a bit of warmth and good visibility these days means not much time for cycling – especially factoring in it’s only a couple of weeks until the winter solstice.

Monday was a bike path ride and it was 2°C and foggy.  After a bit I decided to get a hand warming coffee in Perth.  This is the ride for coffee :

On Tuesday I thought I would take the trike on a loop run out of Bishopsbourne using Armstrongs Lane and Green Rises Road.

For the past few days I had been riding the Anura along the cycle path out of Perth purely as exercise to build the recumbent muscles and now it was time to try something more meaningful.  It’s not a long ride but it does have one short sharp hill within the loop and I wanted to try the trike up it.  Unfortunately the lanes between Longford and Bracknell have been attracting a lot more gravel truck traffic of late and I am looking for roads they are not on.  Would  this loop miss them?  Well, I did meet a couple.

A note:  I am using iMovie to produce the videos and although I can add a still image to the storyboard it just will not display it when the movie is created.  Maybe something to do with my laptop being 8 years old and not being able to run the latest software?  I will try to come up with the answer!

Wednesday.  Decided to give the Brompton a whirl and to get a tree picture or two  for the challenge on the cycle 365 website.

Here they are – chainsaw carved peoples representing a steam engine fireman and passengers.  They are standing proud on the second 2°C morning in a row.  And again it’s 10.30am!

After taking the pictures I headed down the back streets of Perth to go and find a pathway leading to Eskleigh House – a venue these days providing support and services for people with disabilities.  The house is also the venue for a number of art shows in the year and I recall from our early days in Longford making our way there via a backroad.  I just couldn’t think how to get on it!

Initially I cycled down to the South Esk river as I thought the path took off from the riverside area.  The sun poking through a bit of mist left from the fog was creating an attractive winter atmosphere.

The view downriver to the Midland Highway bridge

After cycling downriver the path / road came to an end and it was necessary to head towards the town again.  So I did.  As the road closed in on the Midland Highway I thought maybe the route was off to the side so I cycled along the footpath by the highway.  Soon it joined a side road and that side road ran back down to the river.  Ah yes – this was more like it.  Through another riverside access point (no doubt very busy in summer) I finally found the path running under the highway, then up a climb away from the river and out onto the back road I remembered.  So that’s where it is !!

There followed a very pleasing 2-3 kilometre ride up to the gates of Eskleigh with no traffic at all.  I could hear the churning of vehicles on the highway but they were invisible and soon ignorable.

(From the Eskleigh Foundation history pages) : Eskleigh was built on land granted to the Richie family. Captain Thomas Ritchie built a new house on the riverbank, just down river from the present dwelling, and by 1833 had a flour mill operating by water power.  But natural disaster seemed to plague the mill.  It was washed away in the Great Floods of 1852, and then rebuilt, only to be destroyed again by fire just a few days after Mr Gibson purchased the property in 1867. In 1870, Mr Gibson began to build his new home (now Eskleigh), for which he harnessed the water power provided by the old mill race to run a generator.  This provided electric light for the house and the outbuildings, and it is believed that the home was the first private dwelling in the Southern Hemisphere to be electrically lit.  The farm progressed and it became famous for it’s merino sheep.  In 1943 a Mr B Gibson inherited the property, decided it was too big for him and so began a trust to enable the house to be used to provide assistance for people with disabilities.

From the Eskleigh gates I retraced my wheel marks and headed back to the “station” to pick up the car and head home for a warm-up.

On Saturday I rode the Armstrong Loop again but this time on Vivente and from Longford.  This added 40k to the weekly total.

Sunday I was back on the cycle path to cycle another cool, sunny morning and get some more ks in on the trike.  One disappointing feature is that now the road has been bypassed by the highway people are beginning to use it as a place to dump their rubbish. I don’t understand – how hard is it to put garbage bags in a bin?

On that grumble I shall close for the week.